The Samjiyon Band performs traditional European classical music, instrumental, percussion, and sung pieces, ranging from orchestral to solos. It has been said that calling the "band" an orchestra would be more fitting. Uncommonly for a North Korean orchestra of its kind, the Samjiyon Band is led by a woman, Ri Sune. The band is part of the umbrella organization Mansudae Art Troupe.

The history of the band began in 2009 when North Korean leader Kim Jong-il ordered the band to be formed. Later, several members of the band joined in a new Moranbong Band. When the current leader Kim Jong-un began promoting the latter band, popularity of the Samjiyon Band began to decline. While live performances of the band are numerous, it is not clear if they have ever released any records.

It is currently unknown if the band has any relation to the Samjiyon Orchestra that performed at the start of the 2018 Winter Olympics in South Korea. Multiple foreign observers, including officials from South Korea's Ministry of Unification, expect the two musical groups to be related someway.

The band is named after the town of Samjiyon, Ryanggang Province near Mount Paektu that is symbolic of the Kim dynasty. In North Korean propaganda, the town is portrayed as a "sacred site of the revolution", where the founding leader Kim Il-sung won an important battle against the Japanese and where his son Kim Jong-il was born. [2]

The Samjiyon Band was created in January 2009 by Kim Jong-il, [3] [1] who had changed his policy toward musical groups since he had a stroke in 2008. [1] The band was created from musicians of the Merited Women's Instrumental Ensemble of the Mansudae Art Troupe, [3] [1] an umbrella organization of North Korean artists. [1]

In February 2018, the Orchestra performed in South Korea, marking the first time in 12 years that any North Korean Orchestra had done so. [6] [7]

The Samjiyon Band performs traditional European classical music, [4] instrumental, percussion, and sung pieces, [2] ranging from orchestral to solos. [3] They play mostly classical instruments, [9] including wind and string instruments, such as violin, cello, harp, trumpet, trombone, clarinet, flute, and timpani, with the occasional piano, accordion, and saxophone. [3] Although titled a "band", "[i]t would have been fair to call the Samjiyon Band an orchestra because the band [includes] cellos, violins, and other orchestral instruments", according to a defector. [2] It sometimes performs together with foreign performers as part of cultural exchange, including a 2011 concert conducted by Pavel Ovsyannikov. [4]

The band has between 50 and 60 members, [8] "winners of national and international contests and excellent graduates from Pyongyang Kim Won Gyun Conservatory". The band members are in their 20s or 30s. [3]

The leader of the band in 2017 was Ri Sune (리순애), a female violinist. She also conducted the band. It is rare for a North Korean orchestra of its kind to be led by a woman. [1] In 2018 the leader of the Samjiyon Orchestra that visited South Korea was Hyon Song-wol, another female artist and lead singer of Moranbong Band. [10]

Although North Korean bands routinely rotate members, some affiliations appear to be long-term. Such is the case of violinist Hong Su-kyong in the Samjiyon Band, for instance. [5]

This article on a musical group does not include a complete listing of members; you can help by expanding it.

The Samjiyon Band is possibly distinct from the Samjiyon Orchestra, [2] but the two groups seem to be closely related. [11]

The Samjiyon Orchestra was hastily founded ahead of inter-Korean high-level talks concerning North Korea's participation in the 2018 Winter Olympics in South Korea for the purpose of performing during the Games. [12] [10] The Orchestra performed in the South at the start of the Games. [10] Two months later, the Samjiyon Orchestra performed in Pyongyang together with South Korean musicians in the Spring is Coming concert tour that brought together artists from both countries. [13] [14]

The orchestra might be formed from members of the original Samjiyon Band, [2] with additional members. [9] This opinion is shared by multiple observers, [15] including the South Korean Ministry of Unification, and defectors familiar with the cultural circles. [2] Jeon Young-sun of the Institute of the Humanities for Unification at the Konkuk University points out that because North Korean groups are under government control, it is easy to reorganize them keeping some of the original elements and adding new ones on an ad hoc basis. [9]

This article on a musical group does not include a complete listing of members; you can help by expanding it.

The contemporary culture of North Korea is based on traditional Korean culture, but has developed since the division of Korea in 1945. Juche ideology formed by Kim Il-sung (1948–1994) asserts Korea's cultural distinctiveness and creativity as well as the productive powers of the working masses. 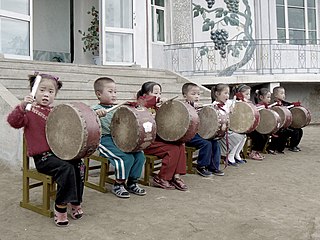 The Pochonbo Electronic Ensemble is an orchestra from North Korea. It is famous for its performances of revolutionary and folk songs. They have been reported to be one of the country's most popular groups.

The Mansudae Art Troupe is a North Korean troupe of musicians that create light-classical operas and music, as well as dance pieces.

The East Pyongyang Grand Theatre is a 2,500-seat theatre located in the North Korean capital, Pyongyang. It was the site of the 2008 concert by the New York Philharmonic, which was the first significant cultural visit to North Korea by the United States since the Korean War.

Hyon Song-wol is a North Korean singer and politician. She was reportedly the mistress of North Korean Supreme Leader Kim Jong-un.

The Unhasu Orchestra is a possibly disbanded musical group based in Pyongyang, North Korea. It performs primarily with Western instruments, sometimes performing alongside traditional Korean soloists. The orchestra has a concert hall, the Unhasu Theater in Pyongyang, dedicated for its use. Ri Sol-ju, the wife of Kim Jong-un, was a singer in this group.

The Moranbong Band, also known as the Moran Hill Orchestra, is an all-female music group in North Korea whose original members were selected by the country's supreme leader Kim Jong-un. Performing interpretive styles of pop, rock, and fusion, they are the first all-female band from the DPRK, and made their world debut on July 6, 2012. Their varied musical style has been described as symphonic because it is "putting together different kinds of sounds, and ending in a harmonious, pleasing result."

The Mansudae Art Theatre is a theatre located near the Grand People's Study House central library, in North Korea. It was completed in 1976.

Chongbong Band is a North Korean light music choir and orchestra. The group consists of seven members: singers and instrumentalists playing mainly brass instruments. According to KCNA, the band members are instrumentalists of the Wangjaesan Art Troupe and singers of the Moranbong Band's chorus.

"We Will Go to Mount Paektu" is a 2015 North Korean light music song in praise of the country's leader, Kim Jong-un. 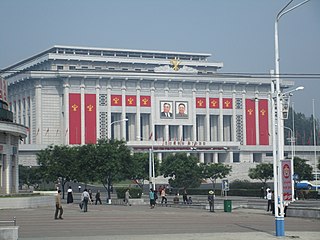 The April 25 House of Culture is a theatre located in Pyongyang, North Korea. It was built in 1974-1975 to provide a venue for military education, and was originally called the February 8 House of Culture. It is located on Pipha Street in the Moranbong District of Pyongyang. The classically colonnaded building is considered one of the best examples of 1970s socialist monumentality in North Korea, the other being the visually similar Mansudae Art Theatre.

Spring is Coming was a concert that occurred in Pyongyang, North Korea, on April 1 and 3, 2018. It included numerous South Korean performers, and was described as an important event in the 2018 thaw in the North Korea–South Korea relations. 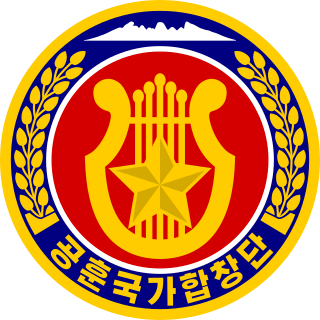 The State Merited Chorus and Symphony Orchestra of the Korean People's Army (Korean: 조선인민군공훈국가합창단) is the principal musical performing unit of the Korean People's Army, based in the North Korean capital city of Pyongyang. As the second oldest military chorus and instrumental ensemble, it serves as one of the outstanding premier musical ensembles within the whole KPA proper and has been hailed as a model institution. It has been in existence since February 1947.

Sonu Hyang-hui is a North Korean violinist, most famous for her role as the leader of the string section of the Moranbong Band.