Last updated October 23, 2021
Painter and writer from the Northern Netherlands

Samuel Dirksz van Hoogstraten (2 August 1627, in Dordrecht – 19 October 1678, in Dordrecht) was a Dutch painter of the Golden Age, who was also a poet and author on art theory.

Samuel Dirksz van Hoogstraten trained first with his father Dirk van Hoogstraten and stayed in Dordrecht until about 1640. On the death of his father, he moved to Amsterdam where he entered the workshop of Rembrandt [ citation needed ]. A short time later, he started out on his own as a master and painter of portraits.

He later made several travels which took him (1651) to Vienna, Rome and London, finally retiring to Dordrecht. There he married in 1656, and held an appointment as provost of the mint[ citation needed ].

A sufficient number of Van Hoogstraten's works have been preserved to show that he strove to imitate different styles at different times. In a portrait dated 1645, currently in the Lichtenstein collection in Vienna, he imitates Rembrandt. He continued in this vein until as late as 1653 when he produced a figure of a bearded man looking out of a window. This, one of the more characteristic examples of his style, is exhibited in the Kunsthistorisches Museum, Vienna. He was also skilled at trompe-l'œil still lifes.

A view of the Vienna Hofburg, dated 1652, displays his skill as a painter of architecture. In contrast, a piece at the Hague representing a "Lady Reading a Letter as she crosses a Courtyard" (Mauritshuis) or a "Lady Consulting a Doctor," (in the Rijksmuseum at Amsterdam), imitates de Hooch. One of his last remaining works is a portrait of Mathys van den Brouck, dated 1670.

He produced many etchings as well, and some of his plates are still preserved. His self-portrait, engraved by himself at the age of fifty, still exists.

Van Hoogstraten's fame derives from his versatile career as a painter, poet and zealous social climber[ citation needed ]. Besides painting and directing a mint, he devoted some of his time to literary labours. His magnum opus is a book on painting, the Introduction to the Academy of Painting, or the Visible World (original title: 'Inleyding tot de hooge schoole der schilderkonst: anders de zichtbaere werelt', Rotterdam, 1678) which is in length and theoretical scope one of the most ambitious treatises on the art of painting published in the Dutch Republic in the seventeenth century. [4] [5] It covers issues such as pictorial persuasion and illusionism, the painter's moral standards and the relation of painting to philosophy, referring to various ancient and modern authors. While reacting to international, mainly Southern European ideas on painting which Van Hoogstraten may have encountered during his travels, the treatise also reflects contemporary talk and thought on art from Dutch studios. He wrote it as a sequel to Karel van Mander's early-17th-century book on painting and painters entitled Het Schilder-Boeck . One of van Hoogstraten's many students, Arnold Houbraken, later wrote the book entitled The Great Theatre of Dutch Painters , which included a biography of his teacher. This biography is the basis of most of the information that we have about van Hoogstraten today.

Van Hoogstraten also composed sonnets and tragedies. We are indebted to him for some of the familiar sayings of Rembrandt[ citation needed ].

Ludolf Bakhuizen was a German-born Dutch painter, draughtsman, calligrapher and printmaker. He was the leading Dutch painter of maritime subjects after Willem van de Velde the Elder and Younger left for England in 1672. He also painted portraits of his family and circle of friends.

Otto Marseus van Schrieck was a painter in the Dutch Golden Age. He is best known for his paintings of forest flora and fauna.

Arnold Houbraken was a Dutch painter and writer from Dordrecht, now remembered mainly as a biographer of Dutch Golden Age painters.

Peter, Peeter or Pieter Franchoys or Francois was a Flemish Baroque painter, who is mainly known for his portraits and religious paintings. 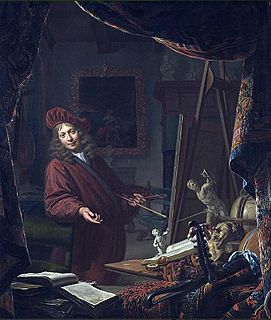 Abraham Diepraam, or Diepraem, was a Dutch Golden Age painter.

Barent van Kalraet, or Barent Pietersz Calraat was a Dutch Golden Age painter and the younger brother of Abraham Calraet.

Het Schilder-Boeck or Schilderboek is a book written by the Flemish writer and painter Karel van Mander first published in 1604 in Haarlem in the Dutch Republic, where van Mander resided. The book is written in 17th-century Dutch and its title is commonly translated into English as 'The Book of Painters' or 'The Book of Painting' and sometimes as 'The Book on Picturing'. Het Schilder-Boeck consists of six parts and is considered one of the principal sources on the history of art and art theory in the 15th and 16th century Low Countries. The book was very well received and sold well. Karel van Mander died two years after its publication. A second posthumous edition, which included a brief, anonymous biography of van Mander was published in 1618. This second edition was translated by Hessel Miedema into English and published in 1994-1997 together with a facsimile of the original and five volumes of notes on the text.

Jan van Hoogstraten (1628–1654) was a Dutch Golden Age painter who died young in Vienna, where he was living with his older brother Samuel van Hoogstraten.

Gerard Wigmana, was an 18th-century painter from the Northern Netherlands.

Peiraikos, or Piraeicus, was an Ancient Greek painter of uncertain date and location. None of his work is known to have survived and he is known only from a brief discussion by the Latin author Pliny the Elder. Pliny's passage comes in the middle of his discussion of painting in Book XXXV of his Natural History, completed about 78 AD:

It is well to add an account of the artists who won fame with the brush in painting smaller pictures. Amongst them was Peiraikos. In mastery of his art but few take rank above him, yet by his choice of a path he has perhaps marred his own success, for he followed a humble line, winning however the highest glory that it had to bring. He painted barbers' shops, cobblers' stalls, asses, eatables and similar subjects, earning for himself the name of rhyparographos [painter of dirt/low things]. In these subjects he could give consummate pleasure, selling them for more than other artists received for their large pictures. 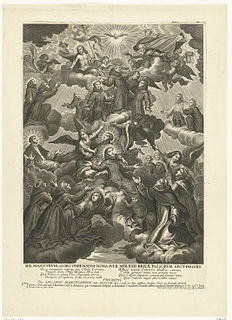 Johan Zierneels was a Dutch painter who specialized in Christian religious themes.