Samut Sakhon (Thai : สมุทรสาคร, pronounced [samùt sǎːkʰɔːn] , Pronunciation) is a City in Thailand, capital of Samut Sakhon Province. [1] It is a stop on the Maeklong Railway. Samut Sakhon is 48 km from Bangkok. [2] It is part of the Bangkok Metropolitan Region.

Samut Sakhon was formerly called Tha Chin (Chinese Pier) probably because, in the old days, it had been a trading port for a vast number of Chinese junks. In 1548, a City named Sakhon Buri was established at the mouth of the Tha Chin River. It was a center for recruiting troops from various seaside towns. The name of the City was changed to Mahachai when Klong (canal) Mahachai was dug in 1704 to connect the Tha Chin River to the City. Later, the City was renamed Samut Sakhon by King Rama IV but it is still popularly called Mahachai by its residents. [1] 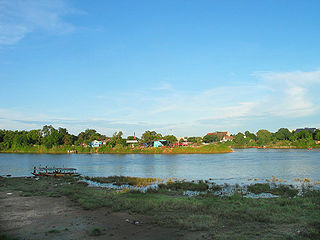 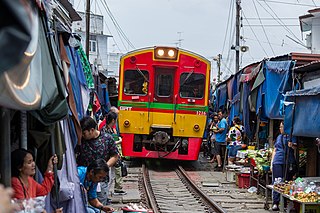 Samut Songkhram is one of the central provinces (changwat) of Thailand. 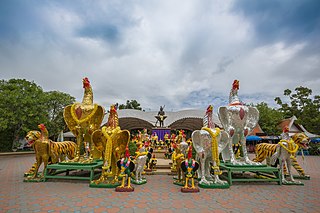 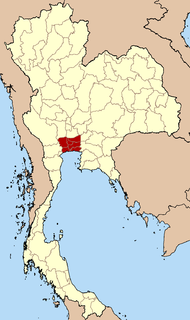 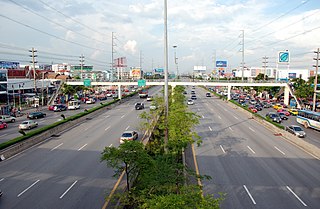 Yan Wal Yun is one of the largest sauce companies in Thailand. Its products are largely sold under the "Healthy Boy" brand. It was founded in 1947 by the Tangsombatvisit family. In 1954 the factory expanded for the first time moving to Sathon, Bangkok, which was ten times larger than the previous factory. A few decades later the company registered as a limited company.

The Tha Chin river is a distributary of the Chao Phraya river, Thailand. It splits near the province of Chai Nat and then flows west from the Chao Phraya through the central plains, until it empties into the Gulf of Thailand in Samut Sakhon Province. 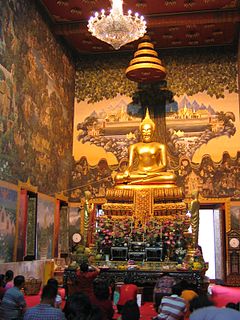 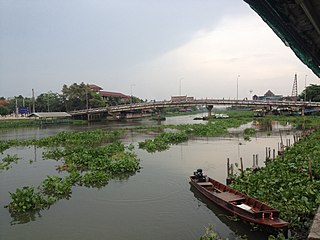 Krathum Baen is a district (amphoe) in the northern part of Samut Sakhon Province, central Thailand. 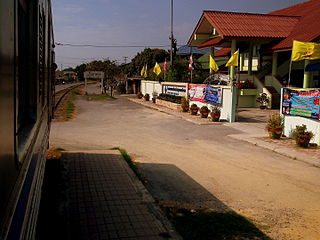 Thailand has 25 river basins with 254 sub-basins. Rainwater is one of the most important sources of water. Thailand's water resource per capita is less than that of other countries in the region.

Wongwian Yai, also spelled "Wong Wian Yai" or "Wongwien Yai", is a large roundabout in Thonburi, on the west bank of the Chao Phraya River in Bangkok, Thailand, where the statue of King Taksin is situated.

The Maeklong Railway is a 1,000 mm railway that runs for nearly 67 kilometres (42 mi) between Wongwian Yai, Bangkok, and Samut Songkhram in central Thailand. The line consists of two sections: the eastern Mahachai Line, which runs between Samut Sakhon and Wongwian Yai with 18 stations, and the Ban Laem Line, which runs between Samut Sakhon and Samut Songkhram with 15 stations. The two stretches are separated by the Tha Chin River at Samut Sakhon. The only connection between the stations on the opposite sides of the river is by boat. 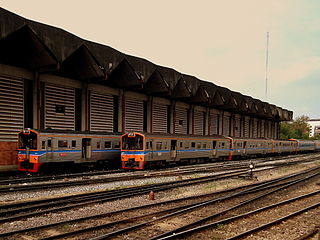 2016 Regional League Division 2 Western Region is the 4th season of the League competition since its establishment in 2013. It is in the third tier of the Thai football league system.

Khlong Om Non is a khlong (canal) in Nonthaburi Province, a part of Greater Bangkok.