Naceri was born to an Algerian Berber Kabyle father and a French mother in the 4th arrondissement of Paris and spent his childhood in the Parisian suburb of Fontenay-sous-Bois. His brother is Bibi Naceri, who co-wrote and co-starred in international hit film District 13 . He shared the award for Best Actor for his role in the film Days of Glory at the 2006 Cannes Film Festival. [1]

Stemming from a substance abuse charge in 2003, Naceri was sentenced to eight months' imprisonment with deferment, had his driving licence suspended for three years, and was penalized with a €5,000 fine for a road rage incident in which he smashed a car and assaulted one of its occupants. [2] [3] [4] [5]

In November 2005, after waiting for a late guest, Naceri attacked a 22-year-old man with an ashtray at a trendy Paris restaurant. [6] The actor was convicted for assault and spent two months in jail. [7] He was released in February 2006. Then, in December 2006 he was imprisoned for racially abusing police officers. [8] In January 2007 he was accused of attempted murder after stabbing a security guard in Aix-en-Provence. He was sentenced to 9 months in prison (6 months suspended) for violence and was also sentenced to 1 month in prison for assaulting two guards at a medical center where he was being treated for overdosing on drugs. [9] [10]

1999: Cesar Award for Most Promising Actor

Samy Naceri was starred in the MV of Günahsız Günahım song. Günahsız Günahım was taken at Paris for same-named MV of Azerbaijani singer Roya. It was directed by Charly Clodion and managed by Kenan Bayramov and Boris Abdull. Music of song is Naila Mirmammadli's. 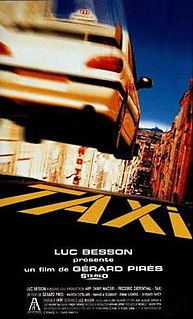 Taxi is a 1998 French action comedy film starring Samy Naceri, Frédéric Diefenthal and Marion Cotillard, written by Luc Besson and directed by Gérard Pirès. It is the first installment in the Taxi film series. It has four sequels, Taxi 2, Taxi 3, Taxi 4 and Taxi 5 and one English-language remake, Taxi (2004). It also provided the premise for the 2014 American television show, Taxi Brooklyn.

Taxi 2 is a 2000 French action comedy film directed by Gérard Krawczyk and released in March 2000. Starring Samy Naceri, Frédéric Diefenthal and Marion Cotillard. It is the second installment in the Taxi film series. It is a sequel to Taxi, written by Luc Besson and directed by Gérard Pirès in 1999. It was followed by Taxi 3 in January 2003.

Taxi 3 is a 2003 French action comedy film directed by Gérard Krawczyk. Starring Samy Naceri, Frédéric Diefenthal and Marion Cotillard, it is the sequel to Taxi 2, and was followed by Taxi 4. It is the third installment in the Taxi film series.

Jamel Debbouze is a French-Moroccan actor, comedian, screenwriter, film producer and director. Best known for his stand-up comedy sketches, he also worked with director Alain Chabat in several films and other notable French humourists such as Florence Foresti, Fred Testot and Gad Elmaleh. He has starred in a number of box-office successes, including Amélie, Asterix & Obelix: Mission Cleopatra, Hollywoo and HOUBA! On the Trail of the Marsupilami. He is the founder of the Canal+ television show Jamel Comedy Club. 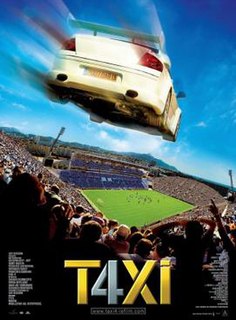 Taxi 4 is a 2007 French action comedy film directed by Gérard Krawczyk and the fourth installment of the Taxi film series. It is a sequel to Taxi 3 and followed by Taxi 5. As with all the other films in the franchise Gallic Taxi, Samy Naceri plays taxi driver "Daniel Morales", this time in a Peugeot 407, unlike the 406 in the previous films. Frédéric Diefenthal is "Émilien Coutant-Kerbalec", whilst Jean-Christophe Bouvet reprises his role as "General Bertineau" yet again. 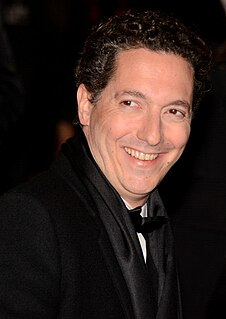 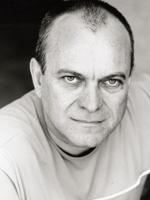 Jean-Christophe Bouvet is a French actor, film director and writer.

Nadia Farès is a French actress. She made her film debut in 1992, with My Wife's Girlfriends. She rose to fame with the police thriller Les Rivières pourpres. She appeared as Jade Agent Kinler in the 2007 action/thriller War, and as Pia in the 2007 horror film Storm Warning. 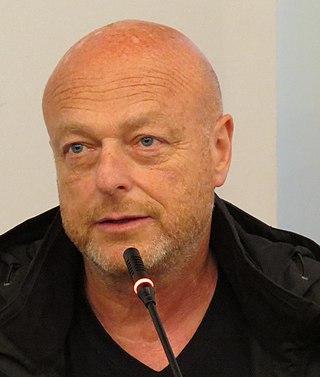 Gérard Krawczyk is a French film director. He is of Polish descent. 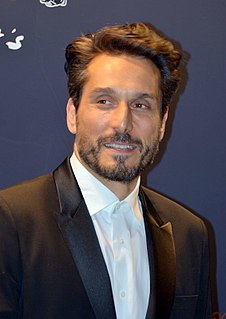 Vincent Tulli was born in Paris, 5 February 1966. He is a sound mixer and a sound designer. He is also an actor. 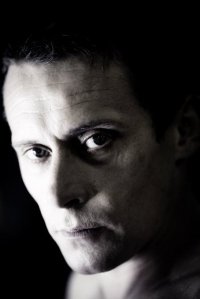 Francis Renaud, is a French film and television actor.

Fanfan la Tulipe is a 2003 French comedy adventure film directed by Gérard Krawczyk and starring Vincent Perez and Penélope Cruz. It was screened out of competition at the 2003 Cannes Film Festival. It is a remake of the 1952 film Fanfan la Tulipe.

Lætitia Masson is a French film director and screenwriter. She has directed twelve films since 1991. Her film À vendre was screened in the Un Certain Regard section at the 1998 Cannes Film Festival. 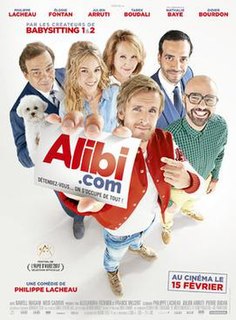 Alibi.com is a 2017 French comedy film. It is directed by Philippe Lacheau.

Taxi is a series of comedy films, created by French screenwriter and producer Luc Besson, consisting of 5 films. In addition to them, an American-French remake of the 1998 original was also made in 2004 (Taxi) and in 2014 an American-French TV series called Taxi Brooklyn aired on television.

The Code is a 2002 French action film directed by Manuel Boursinhac.