Sancho IV of Castile (12 May 1258 – 25 April 1295) called the Brave (el Bravo), was the king of Castile, León and Galicia from 1284 to his death. Following his brother Ferdinand's death, he gained the support of nobles that declared him king instead of Ferdinand's son Alfonso. Faced with revolts throughout his reign, before he died he made his wife regent for his son Ferdinand IV.

Sancho was the second son of Alfonso X and Yolanda, daughter of James I of Aragon. [1] His elder brother, Ferdinand de la Cerda, died in November 1275. In 1282 Sancho assembled a coalition of nobles to declare for him against Ferdinand's son Alfonso, then took control of the kingdom when Alfonso X died in 1284. This was all against the wishes of their father, but Sancho was crowned in Toledo nevertheless.

Sancho's ascension was in part due to his rejection of his father's elitist politics. Sancho was recognised and supported by the majority of the nobility and the cities, but a sizable minority opposed him throughout his reign and worked for the heirs of Ferdinand de la Cerda. One of the leaders of the opposition was his brother John, who united to his cause the lord of Biscay, Lope Díaz III de Haro. Sancho responded by executing the Lord of Biscay and incarcerating his brother. According to the chroniclers, he cemented his hold on power by executing 4,000 other followers of Infante Alfonso, son of Ferdinand de la Cerda, in Badajoz. He executed 400 more in Talavera and more in Ávila and Toledo.

Upon dispensing with this opposition, Sancho pardoned his brother, who was released. John bided his time before fomenting revolt again: the conflict over Tarifa. He called in the aid of the Marinids in Morocco and besieged Guzmán the Good in his castle (1291). At this siege occurred that famous act of heroism, the innocent death of the son of Guzmán. Tarifa was faithfully defended until Sancho could rescue it and the Marinids retreated to the Maghreb. The intent of both John and the Sultan of Marinids (to invade) was foiled.

When James II succeeded to the Crown of Aragon, he endeavoured to bind the two crowns more closely and to unite in the Reconquista. Indeed, both of James' predecessors had tried to do likewise. Sancho was also the friend and tutor of Juan Manuel of Castile.

Just before succumbing to a fatal illness (possibly tuberculosis) [2] he appointed his wife, María de Molina, to act as regent for his nine-year-old son, Ferdinand IV. He died on 25 April 1295 in Toledo. [2]

Sancho married Maria de Molina in 1282, [3] but at first their marriage did not have the necessary papal dispensation for two reasons: First, they had a distant blood relation, and second, Sancho had been betrothed as an infant to a rich Catalan heiress named Guillerma Moncada.

He had three illegitimate children:

By another woman whose name is unknown, he had:

Urraca is a female first name. In Spanish, the name means magpie, derived perhaps from Latin furax, meaning "thievish", in reference to the magpie's tendency to collect shiny items. The name may be of Basque origin, as suggested by onomastic analysis. 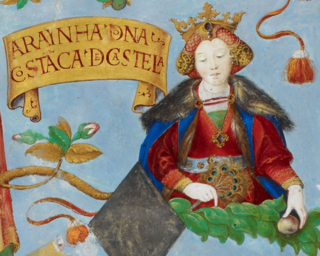 Constance of Portugal, was Queen of Castile by her marriage to Ferdinand IV. 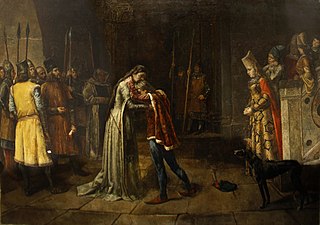 Eleanor de Guzmán (Leonor) (1310–1351) was a Castilian noblewoman and long-term mistress to Alfonso XI of Castile. She was the mother of King Henry II of Castile.

Muhammad II was the second Nasrid ruler of the Emirate of Granada in Al-Andalus on the Iberian Peninsula, succeeding his father, Muhammad I. Already experienced in matters of state when he ascended the throne, he continued his father's policy of maintaining independence in the face of Granada's larger neighbours, the Christian kingdom of Castile and the Muslim Marinid state of Morocco, as well as an internal rebellion by his family's former allies, the Banu Ashqilula.

Blanche of France (1253–1323) was a daughter of King Louis IX of France and Margaret of Provence.

Pedro Fernández de Castro, nicknamed el de la Guerra, was a powerful Galician noble and military figure of the House of Castro, descended by illegitimate lines from the kings of Castile-Leon-Galicia. Pedro Fernandez de Castro was Lord (Señor) of Lemos and Sarria and served as mayordomo mayor of Alfonso XI of Castile, adelantado de la frontera (governor) of Andalusia, Galicia and Murcia and pertiguero mayor of the lands of Santiago.

Catherine of Castile was suo jure Princess of Asturias and heiress presumptive to the Castilian throne all her life. 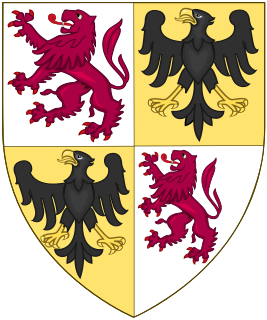 John of Castile, called the "el de Tarifa" was an infante of Castile and León. He was engaged in a decades-long fight for control over the Lordship of Biscay with Diego López V de Haro, the uncle of his wife. 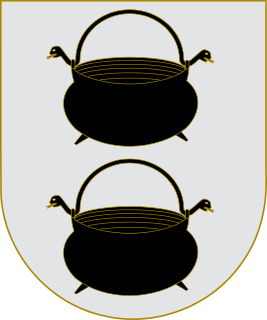 Nuño González III de Lara was a Castilian noble of the House of Lara. He was the lord consort of Alegrete, Vide, and Sintra and served as Alférez del rey for King Ferdinand IV of Castile.

Lope Díaz de Haro was a Spanish noble of the House of Haro, the traditional Lords of Biscay. He was the firstborn son of Diego Lopez V de Haro, Lord of Biscay. Whilst he did not inherit his father's title of Lordship over Biscay, he is best known for being the lord of Orduña-Urduña and of Balmaseda. He further served as Alférez to King Ferdinand IV of Castile.

Fernando Díaz de Haro was a Spanish noble of the House of Haro. He was the second born son of Diego López V de Haro, the Lord of Biscay, and his wife, the infanta Violante de Castilla y Aragón, daughter of Alfonso X of Castile. Fernando became lord of Orduña and Balmaseda in 1322, after the death of his brother, Lope Díaz IV de Haro who died without leaving any descendants.

Maria of Portugal was a Portuguese royal, daughter of Infante Afonso of Portugal and his wife Violante Manuel.