Hla Htut was born in 1936 on Wakema, Irrawaddy Division, British Burma to parents U San Htoo (Myanmar Htoo) and Daw Mya. He was youngest of seven siblings.

When he was young, after the war, he attended middle school education at Myoma High School, Yangon from 1947 to 1951. He passed his matriculation examination while he was continuing his high school education at Government High School No. 1 from 1951 to 1957. He studied at Yangon University (Yankin College) and Mandalay University until the second year. At that time, he was a successful musician by the name Sandayar Hla Htut in Myanmar radio music world, the world of drama; school, college, university and art world.

In 1960s, while Sandayar Hla Htut was successing as a musician, composer and a film music director, on the other hand, he wrote literary articles and also wrote translated short stories. He has written a number of music articles for music magazines. In collaboration with Harb U Ba Than, he published a book, 'Music Symbolism'. He also published books 'Music Symbols' and 'Sandayar Hla Htut Life and Songs'. He won Best Music Award in 1994 Myanmar Motion Picture Academy Awards for Ta Pyi Thu Ma Shwe Htar film.

After that, he wrote a series of 'Myanmar Music Stream' articles on in Sanda Comics Magazine. He continued wrote articles in 'Moe Wai', 'Mahaythi', 'Movie soundtrack', 'Kalyar', 'Literary Journal', 'Thoughts', 'New Smell' and 'Mingalar' Magazines. Later, in 1995, he published a book 'Burmese Music Stream' in 'Nay Yee Yee' publishing house and he was awarded Myanmar National Literature Award in this year.

It is said that "Sandayar Hla Htut is the greatest bond between literature and music." In the world of Burmese literature, he wrote articles alongside other musicians, composers and singers such as Myoma Nyein, Ko Hla Moe, Yan Naing Sein, Bogalay Tint Aung, Sagaing Hla Shwe, Than Hlaing, Maung Maung Latt, Myat Lay, Sandayar Chit Swe.

Sandayar Hla Htut was a prolific scholar of Burmese music and the history of world music. He wrote in his book "This book compares world music history to the present day, comparsing of the origins of music, its interpretation of music, its musical aspects, and concepts such as the taste and philosophy of music, and the current state of Burmese music history,". He wrote about events in the world and music, and translated short stories (e.g., The Night We Met with Einstein). He then wrote fragments of his life.

Sandayar Hla Htut died at his home on 5 January 2000 in Yangon. He was 64 years old at the time of his death, and was left by his wife, singer Cho Wai Lwin and son Zaw Myo Htut (Mizzima).

Myanmar National Literature Awards are awards presented to a Burmese author who has published a particularly lauded piece or body of work. There are awards for forms of writing ranging from poetry to novels. Many awards are also dedicated to a certain genre of fiction or non-fiction writing. Most literary awards come with a corresponding award ceremony.

Zaw Win Htut is a Burmese hard rock singer. He is the founder and lead vocalist of the band Emperor.

Khin Maung Toe was a Burmese singer songwriter, and was the longtime lead singer of the Medium Wave (မဇ္ဈိမလှိုင်း) band. He was one of the few successful Burmese singer-songwriters who wrote his own original songs. He released 35 albums in his career. He is best known for his 1984 hit "Maha Hsan Thu" (မဟာဆန်သူ).

Myoma Nyein was a renowned Burmese musician and composer. He was a founder of Myoma Band, the longest surviving music band in the modern Burmese history. Between 1935 and 1939, he recorded over 40 albums and composed a couple of Myanmar New Year (Thingyan) songs that became iconic, performed on Myoma's Silver Swan parade floats, which became a trademark of Thingyan celebration in Mandalay.

Aung Thaung was a Burmese politician and businessman. He served as a member of the country's lower house, the Pyithu Hluttaw, representing the constituency of Taungtha Township, after being elected in the 2010 general election.

Diramore is a Myanmar musician and prorector (training) at the National University of Arts and Culture, Mandalay.

Nay Shwe Thway Aung, also known as Phoe La Pyae is a Burmese public figure and a business tycoon, who is the grandson of Senior General Than Shwe, Myanmar's dictator and former head of a military junta. He is one of the country's top business tycoons in the list of individuals who provide political and financial support for Myanmar's ruling regime and government.

Shwe Pyi Aye was a Burmese musician and composer.

Maung Nyein Thu is a Burmese writer who was born in the town of Gyobingauk in Myanmar. He has written about 300 novels, over 1,000 articles, and more than 30 magazine articles. He was awarded the Myanmar National Literature Award in 1986 and was the editor for multiple magazines and journals, including HtooChar Journal, Crime Scene Journal, and Crime View Journal.

Alinkar Kyawswa is the highest national honor of recognition of an individual for their artistic skills by the government of the Union of Myanmar. From 1949 to 2020, there were about 21 recipients of this award in Myanmar.

Shwe Htoo, is a Burmese singer-songwriter and actor. His first solo album The Imagination Book was released in 2015. 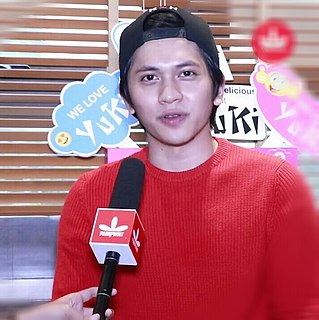 U Thaw, known honorifically as Baganset U Thaw, was a Burmese businessman, trader, administrator, and politician. He was the first manufacturer of porcelain products in Burma. He was a member of the Legislative Council of Burma, patron of the Young Men's Buddhist Association (YMBA), chairman of Myoma National High School Administration Board, and one of the leaders of the General Council of Burmese Associations. 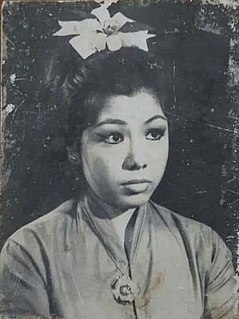 Nwet Nwet Mu was a Burmese actress. She won Best Actress Award in 1974 Myanmar Motion Picture Academy Awards. She was famous from the 1970s until her death.