In 1971, seven sounding rockets of the Tomahawk Sandia type were launched from Sanirajak, some reaching altitudes of 270 km (170 mi). [7]

The climate is tundra (Köppen: ET), without the presence of trees and ice for most of the year. [16] Summers are very short and cool, with chilly nights. Winters are long and extremely cold, lasting most of the year with little chance of a thaw.

Grise Fiord is an Inuit hamlet on the southern tip of Ellesmere Island, in the Qikiqtaaluk Region in the territory of Nunavut, Canada. It is one of three settlements on the island; despite its low population, it is the largest community on Ellesmere Island. The settlement at Grise Fiord, created by the Canadian Government in 1953 through a relocation of Inuit families from Inukjuak, Quebec, is the northernmost public community in Canada. It is also one of the coldest inhabited places in the world, with an average yearly temperature of −16.5 °C (2.3 °F).

Enterprise is a hamlet in the South Slave Region of the Northwest Territories, Canada, located between Great Slave Lake and the Alberta border on the Hay River.

Qikiqtarjuaq is a community located on the island of the same name in the Qikiqtaaluk Region of Nunavut, Canada. The island is known for Arctic wildlife, bird watching, and as the northern access point for Auyuittuq National Park 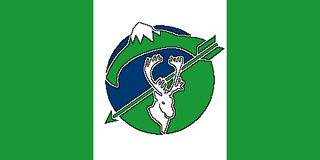 Gamètì, officially the Tłı̨chǫ Community Government of Gamètì is a community in the North Slave Region of the Northwest Territories, Canada. Gamètì, according to the Prince of Wales Northern Heritage Centre means "rabbit-net lake". 'Gamè' means 'rabbit', and 'tì' means lake, or water. It is one of the four Tłı̨chǫ communities which form part of the Tlicho Government.