The Sanjak of Kyustendil was an Ottoman administrative-territorial unit that existed from 1395 to 1878. It included the former lands of Konstantin Dragash - Province of the Dejanović family.

The Kyustendil Sanjak provided the largest number of Sipahi for the Ottoman army of all European Sanjaks, except Rumelia. In its lands is the Rila Monastery and the town of Veles, North Macedonia.

A very interesting fact is that there is a preserved document according to which in Kyustendil in 1570 there was a professional chess player. [1]

The Kyustendil Pasha was the first to be mirmiran in the Ottoman Empire because of the glorious military history of the city with the Battle of Velbazhd and because of Konstantin Dragash, who is the grandfather of the last Roman emperor (Constantine XI Dragases Palaiologos) and at the same time the great-great-grandfather of the first Russian tsar (Ivan the Terrible). [2] 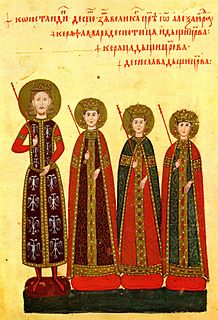 Konstantin Dejanović was a Serbian magnate that ruled a large province in eastern Macedonia under Ottoman suzerainty, during the fall of the Serbian Empire. He succeeded his older brother Jovan Dragaš, who had been an Ottoman vassal since the Battle of Maritsa (1371) which had devastated part of the Serbian nobility. The brothers had their own government and minted coins according to the Nemanjić style. His daughter Jelena married Byzantine Emperor Manuel II Palaiologos in 1392. He fell at the Battle of Rovine, serving the Ottomans against Wallachia, fighting alongside Serbian magnates Stefan Lazarević and Marko Mrnjavčević.

The Battle of Krbava Field was fought between the Ottoman Empire of Bayezid II and an army of the Kingdom of Croatia, at the time in personal union with the Kingdom of Hungary, on 9 September 1493, in the Krbava field, a part of the Lika region in Croatia.

The Uprising of Konstantin and Fruzhin was the earliest Bulgarian uprising against Ottoman rule. It was organized in the early 15th century by two Bulgarian nobles and was supported by a Christian coalition, but failed to liberate Bulgaria.

Opolje is a region in the southern part of the municipality of Prizren in southern Kosovo. The region has 19 villages inhabited by Albanians. 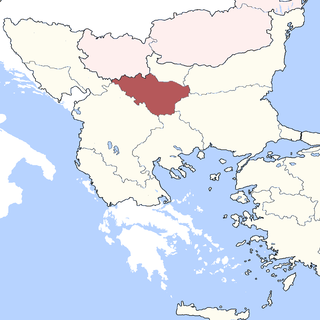 Niš Eyalet was an administrative territorial entity of the Ottoman Empire located in the territory of present-day southern Serbia and western Bulgaria. It was formed in 1846 and its administrative centre was Niš. Pashaluk of Niš was incorporated into Danube Vilayet in 1864.

Tamara Hejtan was a Bulgarian princess, the daughter of the Bulgarian Emperor Ivan Alexander and his second wife Sarah-Theodora.

The eyalet of Aidin, also known as eyalet of Smyrna or Izmir was an eyalet of the Ottoman Empire.

The Sanjak of Niš was one of the sanjaks of the Ottoman Empire and its county town was Niš. It was composed of the kazas of Niš (Niş), Pirot (Şehirköy), Leskovac (Leskofça), Vranje (İvranye), Kuršumlija (Kurşunlu), Prokuplje (Ürküp) and Tran (Turan).

Hüdavendigâr Eyalet was an eyalet of the Ottoman Empire.

The Dejanović or Dragaš, originates from a medieval noble family that served the Serbian Empire of Dušan the Mighty and Uroš the Weak, and during the fall of the Serbian Empire, after the Battle of Maritsa (1371), it became an Ottoman vassal. The family was one of the most prominent during these periods. The family held a region roughly centered where the borders of Serbia, Bulgaria and North Macedonia meet. The last two Byzantine Emperors were maternal descendants of the house.

Pal Kastrioti was an Albanian nobleman attested in c. 1383 as the lord of two villages, Sina and Lower Gardi. According to Gjon Muzaka Pal had three sons: Konstantin, Alexius and Gjon Kastrioti, the latter who was Skanderbeg's father.

The Sanjak of Nicopolis was a sanjak in the Ottoman Empire, with Nikopol in modern Bulgaria as its administrative centre. It was established out of the territories of the Tsardom of Vidin, after the Battle of Nicopolis in 1396.

The Battle of Vrpile or Battle of Vrpile Gulch, also known as the First Battle of Krbava, was fought between the Kingdom of Croatia and the Ottoman Empire in early September 1491 at the Vrpile pass in central Croatia, near Korenica in Krbava. The Croatian army, led by Ban Ladislav of Egervár and Knez (Prince) Bernardin Frankopan, defeated the Ottomans who were on their way back from Carniola to the Sanjak of Bosnia.

Firuz Bey was a 15th and 16th-century Ottoman military officer, Sanjak-bey of the Sanjak of Scutari and Sanjak of Bosnia.

The history of Kyustendil as a settlement has been around for 8000 years and as a city for 2000 years.