The present mayor is Leonel Gouveia, elected in 2013 by Socialist Party. The municipal holiday is Ascension Day.

António de Oliveira Salazar, who was the Prime Minister of Portugal from 1932 to 1968 and leader of the Estado Novo , was born in Vimieiro, Santa Comba Dão on 28 April 1889 to a rural family of modest income.

The town's station was formerly a terminus of the Dão line to/from Viseu. This narrow gauge railway opened in 1890 and was closed to passengers in 1988.

Santa Comba Dão was granted city status in 1999. In mid-2000s, a serial killer murdered three young women in the municipality.

Administratively, the municipality is divided into 6 civil parishes ( freguesias ): [3] 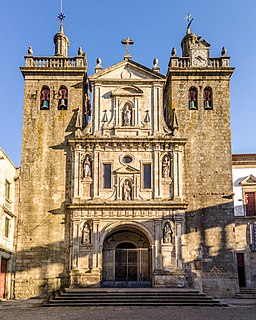 São João de Areias is a Portuguese civil parish in the municipality (concelho) of Santa Comba Dão, in the former-district of Viseu. The population in 2011 was 1,939, in an area of 21.51 km². 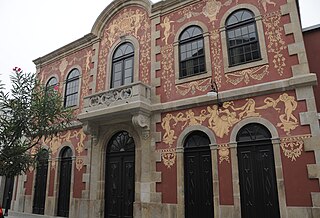 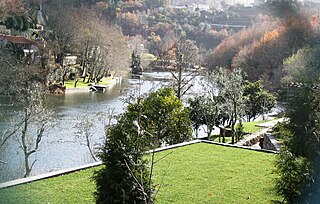 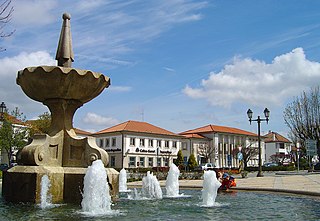 The Church of Santa Engrácia is a 17th-century monument in Lisbon, Portugal. Originally a church, in the 20th century it was converted into the National Pantheon, in which important Portuguese personalities are buried. It is located in the Alfama neighborhood, close to another important Lisbon monument, the Monastery of São Vicente de Fora.

Treixedo is a village and a former civil parish in the municipality of Santa Comba Dão, Portugal. In 2013, the parish merged into the new parish Treixedo e Nagozela.

Vimieiro is the name of several places in Portugal:

Arraiolos is a municipality in Évora District in Portugal. The population in 2011 was 7,363, in an area of 683.75 km². The town of Arraiolos has 3,351 inhabitants. The present Mayor is Silvia Pinto, elected by the Unitarian Democratic Coalition.

Treixedo e Nagozela is a civil parish in the municipality of Santa Comba Dão, Portugal. It was formed in 2013 by the merger of the former parishes Treixedo and Nagozela. The population in 2011 was 1,434, in an area of 19.62 km².

Abraveses is a Freguesia in the municipality (concelho) of Viseu, in the Portuguese central subregion of Dão-Lafões. The population in 2011 was 8,539, in an area of 12.23 km². Abraveses lies 3 kilometres (1.9 mi) north of the centre of the city of Viseu, intimately linked to the historic settlement, and located along an extensive connection between Viseu-Castro Daire and Viseu-São Pedro do Sul.

Alcafache is a freguesia in the municipality (concelho) of Mangualde in the Portuguese central subregion of Dão-Lafões. The population in 2011 was 921, in an area of 12.88 km².