Saqaliba (Arabic : صقالبة‎, romanized: ṣaqāliba, singular Arabic : صقلبي‎, romanized: ṣaqlabī) [nb 1] is a term used in medieval Arabic sources to refer to Slavs and other peoples of Central and Eastern Europe, or in a broad sense to European slaves. The term originates from the Middle Greek slavos/sklavenos (Slav), which in Hispano-Arabic came to designate first Slavic slaves and then, similarly to the semantic development of the term in other West-European languages, foreign slaves in general. [2] The word was often used to refer specifically to Slavic slaves, but it could also refer more broadly to Europeans traded by the Arab traders. [3]

There were several major routes for the trading of Slavic slaves into the Arab world: through Central Asia (Mongols, Tatars, Khazars, etc.) for the East Slavs; through the Balkans for the South Slavs; through Central and Western Europe for the West Slavs and to al-Andalus.[ citation needed ] The Volga trade route and other European routes, according to Ibrahim ibn Jakub (10th century), were serviced by Radanite Jewish merchants. (Compare Crimean–Nogai raids into East Slavic lands.) Theophanes mentions that the Umayyad caliph Muawiyah I settled a whole army of 5,000 Slavic mercenaries in Syria in the 660s.[ citation needed ] After the battle of Sebastopolis in 692, Neboulos, archon of the Slavic corps in the Byzantine army, and 30,000 of his men were settled by the Umayyads in the region of Syria. [4] [5]

In the Arab world, Saqaliba served or were forced to serve in a multitude of ways: as servants, harem concubines, eunuchs, craftsmen, slave soldiers, and as Caliph's guards. In Iberia, Morocco, Damascus and Sicily, their military role may be compared with that of mamluks in the Ottoman Empire. In al-Andalus, Slavic eunuchs were so popular and widely distributed that they became synonymous with Saqāliba. [6] [7] Some Saqāliba became rulers of taifas (principalities) in Iberia after the collapse of the Caliphate of Cordoba in 1031. For example, Mujāhid al-ʿĀmirī organized the Saqaliba in Dénia to rebel, seize control of the city, and establish the Taifa of Dénia (1010–1227), which extended its reach as far as the island of Majorca.

The following list is derived from Bosworth 1996 , p. 17 harvnb error: no target: CITEREFBosworth1996 (help), who calls them the Banū Mujāhid. Mujāhid was a member of Muḥammad ibn Abi ʿĀmir's household. [8]

Abd Allah ibn Muhammad ibn Maslama, surnamed Ibn al-Aftas, was the founder of the Aftasid dynasty of the taifa of Badajoz, in what was then Al-Andalus. He was a Miknasa Berber from the Córdoba region. Ibn al-Aftas became the vizier of Sabur al-Khatib, a former slave of Caliph al-Hakam II, who became prince of the lower march of the former Caliphate of Cordoba. On the death of Sabur, Ibn al-Aftas seized power, and Badajoz under his leadership, became the capital of a principality centered on Guadiana and extending over central Portugal. He was a prominent military tactician and was surnamed "Al-Mansur". He died about 1060 AD.

Mu'awiya II or Mu'awiya ibn Yazid succeeded his father Yazid I as the third Umayyad caliph and last caliph of the Sufyanid line. He ruled briefly in 683-684 (64 AH) before he died.

Fadak was a garden oasis in Khaybar, a tract of land in northern Arabia; it is now part of Saudi Arabia. Situated approximately 140 km (87 mi) from Medina, Fadak was known for its water wells, dates, and handicrafts. When the Muslims defeated the people of Khaybar at the Battle of Khaybar; the oasis of Fadak was part of the bounty given to the Islamic prophet Muhammad. Fadak is said to have become the object of dispute by a group of Muslims between Fatimah and the caliph Abu Bakr after Muhammad died.

Al-Qaid Jawhar ibn Abdallah was a Shia Muslim Fatimid general from the Byzantine Empire who led the conquest of Maghreb, and subsequently the conquest of Egypt, for the 4th Fatimid Imam-Caliph al-Mu'izz li-Din Allah. He served as viceroy of Egypt until al-Mu'izz's arrival in 973, consolidating Fatimid control over the country and laying the foundations for the city of Cairo. After that, he retired from public life until his death.

Abd al-Malik I was amir of the Samanid Empire from 954 to 961. He was the son and successor of Nuh I. His reign was marked by internal strife, with the Turkic slave-soldiers increasing in power. He died after falling from his horse during a game of polo at Bukhara; he was succeeded by his brother Mansur I, who was put on the throne by a faction of ghulams led by the Turkic slave-commander Fa'iq Khassa. 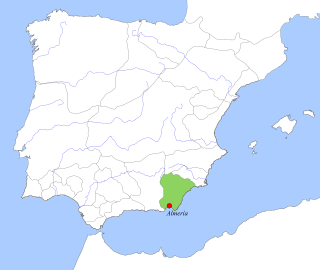 The Taifa of Almería was a Muslim medieval Arab kingdom located in what is now the province of Almería in Spain. The taifa originated in 1012 and lasted until 1091.

Jund al-Urdunn was one of the five districts of Bilad al-Sham during the early Islamic period. It was established under the Rashidun and its capital was Tiberias throughout its rule by the Umayyad and Abbasid caliphates. It encompassed southern Mount Lebanon, the Galilee, the southern Hauran, the Golan Heights, and most of the eastern Jordan Valley.

ʿAbd al-Malik, originally called Sayf al-Dawla, later al-Muẓaffar, was the second ʿĀmirid ruler of al-Andalus, ruling from 1002 until his death. Like his father and predecessor, al-Manṣūr, he was the actual power behind the Caliph of Córdoba. The seven-year government of al-Muẓaffar was a period of peace and prosperity. Later historians likened it to the sābiʿ al-arūs, the first seven days of marriage, and recalled it as a golden age before the Andalusian fitna began in 1009. 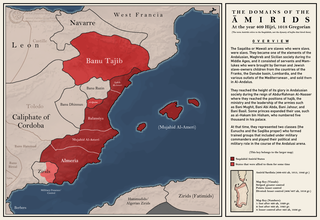 The ʿĀmirids were the descendants and Ṣaqlabī (Slavic) clients of the house of the ḥājib ʿĀmir Muḥammad al-Manṣūr, the de facto ruler of the Umayyad caliphate of Córdoba from 976 until 1002. A series of ʿĀmirid dictators were the powers behind the caliphal throne during the long reign of Hishām II. Four ʿĀmirid dynasties were established during the period of taifas that followed the collapse of the caliphate: Valencia, Dénia, Almería and Tortosa.

The taifa of Dénia was an Islamic Moorish kingdom in medieval Spain, ruling over part of the Valencian coast and Ibiza. With Dénia as its capital, the taifa included the Balearic Islands and parts of the Spanish mainland.

The Taifa of Badajoz was a medieval Islamic Moorish kingdom located in what is now parts of Portugal and Spain. It was centred on the city of Badajoz which exists today as the first city of Extremadura, in Spain.

ʿAbd al-ʿAzīz ibn Marwān ibn al-Ḥakam was the Umayyad governor and de facto viceroy of Egypt between 685 and his death. He was appointed by his father, Caliph Marwan I. Abd al-Aziz's reign was marked by stability and prosperity, partly due to his close relations and reliance on the Arab military settlers of Fustat. Under his direction and supervision, an army led by Musa ibn Nusayr completed the Muslim conquest of North Africa. He was removed from the line of succession to the caliphal throne and, in any case, died before his brother, Caliph Abd al-Malik. However, one of Abd al-Aziz's sons, Umar II, would become caliph in 717–720.

Abu ʾl-Jaysh Mujāhid ibn ʿAbd Allāh al-ʿĀmirī, surnamed al-Muwaffaḳ, was the ruler of Dénia and the Balearic Islands from late 1014 until his death. With the exception of his early and disastrous invasion of Sardinia, his reign was mostly peaceful. His court became a centre of scholarship and literary production and he himself wrote a book about poetry.

Labib al-Fata al-Saqlabi was the founder and first ruler of the Taifa of Tortosa from around AH 400 (1009/1010 CE) to AH 431 (1039/1040). He was a Saqaliba, usually Slavic children that were captured, castrated, sold as slaves in Spain, and educated in the Islamic culture and religion.