Sarai Saleh (Urdu : سرائے صالح‎) is one of the 44 union councils (administrative subdivisions) of Haripur District in the Khyber Pakhtunkhwa province of Pakistan. [1]

Sarai Saleh is located 5 kilometers northeast of Haripur City and is 597 meters above sea level. It is a mostly green valley surrounded by hills covering an area of two to three square kilometers. It is situated on the main Hazara Road, close to the Dor River and is served by a 1928 train station.

The main tribes of the town are Utmanzai and Dalazak.

The primary language spoken in the region is Hindko. Pahari is spoken by some inhabitants, generally only in private.[ citation needed ]

Sarai Saleh has a high literacy rate, 76% in males 61% in females. Government and private educational institutes are located there. [2]

Harda is a city and a municipality in Harda district in the Indian state of Madhya Pradesh. Harda is the administrative headquarters of Harda District.

"The Town of Hari") is a district in Hazara Division of Khyber Pakhtunkhwa province in Pakistan. Before becoming a district in 1991, Haripur had the status of a tehsil in Abbottabad District. Its headquarters is the city of Haripur.

Phillaur is a town and a municipal council as well as a tehsil in Jalandhar district in the Indian state of Punjab.

Ekdil is a town and a nagar panchayat in Etawah district in the state of Uttar Pradesh, India. This place was established by the Ekdil Khan. It was earlier known as Sarai Rupa. In the 17th century, a eunuch named Ekdil Khan came here, and built a new sarai, which he named Ekdil, This town is located at National Highway No.2. It is just 9 kilometers from Etawah. It has a small railway station on the north side named EKDIL. Distance of railway station 3 kilometers from Ekdil town.Ekdil had a population of 11310.

Gharaunda is a city and a municipal committee in Karnal district in the state of Haryana, India. It is situated at a distance of sixty-five miles to the northwest of New Delhi. It is eleven miles from Karnal, the district headquarters. The Amritsar-Delhi main broad-gauge railway line passes through the town. Indo-Israel Centre For Excellence in Vegetables and one of the leading footwear industries of India 'Liberty Shoes' has its manufacturing unit in Gharaunda. This has given fame to the place. Gharaunda is also a very big Grain market of the state.

Kesrisinghpur is a town and a municipality in Ganganagar district in the Indian state of Rajasthan.

Haripur is a census town in the Pandabeswar CD block in the Durgapur subdivision of the Paschim Bardhaman district in the Indian state of West Bengal.

Nasirnagar is an Upazila of Brahmanbaria District in the Division of Chittagong, Bangladesh.

Jaintapur is an Upazila of Sylhet District in the Division of Sylhet, Bangladesh.

Sundarganj is an Upazila of Gaibandha District in the Division of Rangpur, Bangladesh.

Haripur is an Upazila of Thakurgaon District in the Division of Rangpur, Bangladesh.

Langrial is one of the 51 union councils of Abbottabad District in Khyber-Pakhtunkhwa province of Pakistan. It is located in the south west of the district and borders Haripur District. It is surrounded by the tall mountains and beautiful valleys. The people of the town are very hospitable and it's literacy rate is comparatively higher than the surrounding villages because it has numerous Govt and private schools and colleges.

Beer, or Bir,(بیڑ) is one of the 44 union councils, administrative subdivisions, of Haripur District in the Khyber Pakhtunkhwa province of Pakistan.

Hattar is one of the 44 union councils, administrative subdivisions, of Haripur District in the Khyber Pakhtunkhwa province of Pakistan. It is located south of the district capital, Haripur, at 33°51'1N 72°51'8E and borders Taxila Tehsil of Punjab province.

Sarai Niamat Khan is one of the 44 union councils, administrative subdivisions, of Haripur District in the Khyber Pakhtunkhwa province of Pakistan. Serai Niamat Khan is located at 34°4'60N 73°1'60E and lies to the east of the district capital Haripur where it borders Abbottabad District.

Lassan Nawab is a town situated in a long and narrow valley about 32 kilometers from Mansehra city. Lassan Nawab town is also a union council of Mansehra District in Khyber-Pakhtunkhwa province of Pakistan.

Ghazi Tehsil is a tehsil located in Haripur District, Khyber Pakhtunkhwa, Pakistan. The tehsil, headquartered at the town of Ghazi, is itself subdivided into 8 Union Councils, Assistant Commissioner of Ghazi is Usman Ashraf.The main language spoken in the area is Pashto.

Gurholi is a village in Purandar Taluka, India, with an economy based mainly on agriculture where fruits such as figs, custard apples, and pomegranates are produced. The village is surrounded by three mountains, and has a number of temples among the mountains. 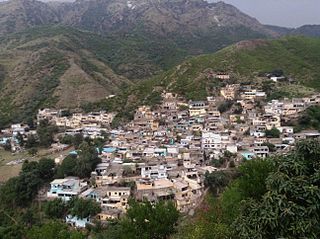 Jarral is one of the 57 Union council of Abbottabad District in the Khyber Pakhtunkhwa province of Pakistan.

Haripur is a village in the Bhopal district of Madhya Pradesh, India. It is located in the Berasia tehsil.