Sarasaviya Awards (Sinhala:සරසවිය සම්මාන) is an award bestowed to distinguished individuals involved with the Sinhala cinema, each year by the Sarasaviya weekly newspaper in collaboration with the Associated Newspapers of Ceylon Limited (Lake House), Sri Lanka in recognition of the contributions made by them to the Sri Lankan film industry. The Sarasaviya ceremony is one of the oldest film events in Sri Lanka. The awards were first introduced in 1964. [1] [2] The Sarasaviya Awards have been often referred to as the Sinhala Cinema industry's equivalent to The Oscars. [3]

The Sarasaviya film awards ceremony began in 1964 at a time when the local cinema was trying to shed its South Indian orientation and establish an indigenous identity. There was no need to go to India to make films any more and the era of Indian artistes too had ended.

The first Sarasaviya film festival was held on May 9, 1964 at the Asoka Cinema Hall, Colombo, 17 years after the first Sinhala film screened. By then a series of good Sinhala films like Podi Putha, Rekhawa, Sandeshaya, Ranmuthuduwa, Kurulubedda, Sikurutharuwa and Gamperaliya had appeared on screen. Yet the mainstream consisted of simulations of Indian productions.

The year 1960 is seen as the beginning of the golden era of Sinhala cinema. The first Sarasaviya Awards Festival had as entries not only the films screened in 1963 but also the films screened from 1960 to 1963. The best film, best director, best script-writer, best actor and best actress were honoured that day. Gamperaliya was regarded as the best film and it was awarded to its producer Anton Wickremasinghe. Sir Lester James Peiris and Regi Siriwardena won the awards for best director and best script-writer, respectively and that too was for Gamperaliya. D.R. Nanayakkara was awarded the best actor title for his performance in Sikuru Tharuwa, another popular film in the 1964 film festival. The best actress award was received by Punya Heendeniya for her performance in Gamperaliya.

The awards festival was suspended by the Rajapaksa administration and were resumed in 2016 after Minister Gayantha Karunathilaka announced that the festival will resume under the new government. [4]

In 2004, there were 33 awards in total, including the 12 prominent awards. However, this varies from year to year. Following is a brief list of the Award winners from each category for each year since 1964.

Winners of past Sarasaviya Awards

Kala Keerthi Sembuge Gamini Shelton Fonseka, was a Sri Lankan film actor, film director and politician. Often considered as the Greatest Actor in the Sinhala Cinema, Fonseka dominated the cinema in 1960s and 1970s to bagged Best Actor award in multiple times. Apart from acting, he was the Deputy Speaker of Sri Lanka Parliament from 1989 to 1994 and Governor of the North-Eastern Province from 1995 to 1998.

Gamperaliya is a 1963 Sri Lankan drama film directed by Dr. Lester James Peries screenplay, dialogue and the script by Reggie Siriwardena and Tissa Abeysekara; it was adapted from the novel Gamperaliya by Martin Wickramasinghe. The film starts ensemble cast of several eras together including, Henry Jayasena, Punya Heendeniya, Wickrama Bogoda, Trilicia Gunawardena and Gamini Fonseka. 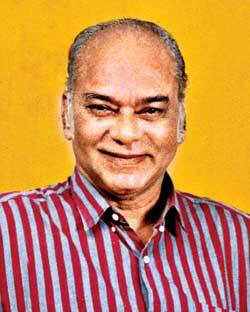 Kala Keerthi Dr Bastian Koralage Henry Rudrigo Jayasena, popularly known as Henry Jayasena, was an actor in Sri Lankan cinema, theater and television. With a career spanning more than four decades, Jayasena is considered one of the best dramatists in Sri Lankan drama. 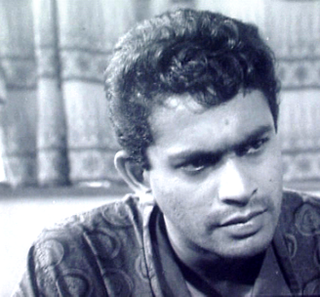 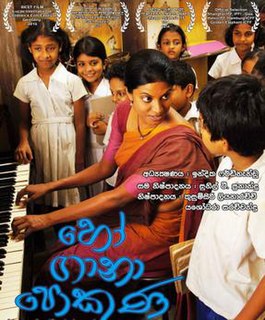 Ho Gana Pokuna is a 2015 Sri Lankan children's musical drama film written and directed by Indika Ferdinando. It depicts a teacher in a remote village, Uma, teaching her students to focus on something they have never seen before. 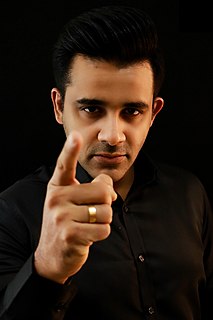 Saranga Disasekara is a Sri Lankan actor, singer, model and a host by profession. Saranga was awarded the most popular television actor in Sri Lanka award at Sumathi Awards, Raigam Tele'es and SLIM-Nielsen Peoples Awards in several times.

The 32nd Sarasaviya Awards festival were held to honor the best films of both 2007 and 2008 from the Sinhala cinema industry on 2 January 2010 at the Bandaranaike Memorial International Conference Hall, Colombo. The ceremony was hosted by Gamini Samarasinghe. 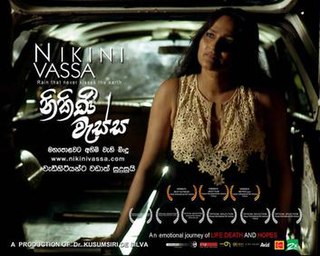 Nikini Vassa is a 2013 Sri Lankan Sinhala drama film directed by Aruna Jayawardana and produced by Dr Kusumsiri De Silva. It stars Chandani Seneviratne and Jagath Manuwarna in lead roles along with Thumindu Dodantenna and Bimal Jayakodi. Music composed by Nadeeka Guruge. It is the 1190th Sri Lankan film in the Sinhala cinema. The film had positive reviews from international and local critics and won many international awards as well.

Vijaya Ramanayake is a Sri Lankan film and music producer, songwriter, journalist and author. He was the founder and producer of Tharanga Music and Film. Ramanayake was the first to introduce compact cassette tapes to Sri Lanka.

Bogoda Appuhamilage Don Wickrama Bogoda, popularly as Wickrama Bogoda, was an actor in Sri Lankan cinema and theater. Primarily known for character acting in both in stage plays and movies. plays, Bogoda has performed in many theater plays and over 15 selected movies over two decades from 1960 to 1985. His role in Movie Golu Hadawatha made his acting sensational

Anula Karunathilaka is a Sri Lankan film actress and theatrical performer. Her work is noted during the 70s film and cinema history in Sri Lanka. One of the most popular actresses in Sinhala cinema in 1960s, she is best known for the popular role 'Dammi' in the blockbuster film Golu Hadawatha.

Gonaduwahandunge Don Lakshman Perera, popularly as G. D. L. Perera, was an actor and filmmaker in Sri Lankan cinema as well as a journalist.