Saroja Vaidyanathan (born 19 September 1937) is a choreographer, guru and a notable exponent of Bharatanatyam. [1] She was conferred the Padma Shri in 2002 and the Padma Bhushan in 2013 by the Government of India. [2]

Saroja was born in Bellary, Karnataka in 1937. She received her initial training in Bharatanatyam at the Saraswati Gana Nilayam in Chennai and later studied under guru Kattumannar Muthukumaran Pillai of Thanjavur. She has also studied Carnatic music under Professor P. Sambamoorthy at Madras University and has a D.Litt in dance from the Indira Kala Sangeet Vishwavidyalaya, Khairagarh. [3]

Saroja gave up dancing after her marriage following conservative and adverse reactions to her performing in public venues and took instead to teaching children dance at home. Following her husband's transfer to Delhi in 1972, she established the Ganesa Natyalaya there in 1974. She was monetarily supported by well wishers and sponsors and the building for the Natyalaya came up at the Qutub Institutional Area in 1988. Besides the dance itself, students at the Ganesh Natyalaya are also taught Tamil, Hindi and Carnatic vocal music to give them a holistic understanding of Bharatanatyam. [4]

Saroja is a prolific choreographer and has to her credit ten full length ballets and nearly two thousand individual Bharatanatyam items. [4] She undertook a cultural tour of South East Asia in 2002, accompanying Prime Minister Atal Bihari Vajpayee's visit to the ASEAN Summit in 2002. [1] She has also published her renditions of Subramania Bharati's songs and poems and some of his works have also been set to dance by her. [1] [5]

Saroja Vidyanathan has written a number of books on Bharatanatyam and Carnatic music including The Classical Dances of India, Bharatanatyam – An In-Depth Study, Carnataka Sangeetham, and The Science of Bharatanatyam. [1] [6]

Saroja's (née Dharmarajan) parents were both authors and her mother Kanakam Dharmarajan was a writer of detective fiction in Tamil. [6] Saroja is married to Vaidyanathan an IAS officer of the Bihar cadre. [4] The couple have a son, Kamesh and their daughter in law Rama Vaidyanathan is a well known Bharatanatyam artiste of international fame. [7]

Saroja was conferred the Padma Shri in 2002 and the Padma Bhushan in 2013 by the Government of India. [2] She is also the recipient of the Sahitya Kala Parishad Samman of the Government of Delhi, the Kalaimamani title bestowed by the Tamil Nadu Eyal Isai Nataka Manram and the Sangeet Natak Akademi Award. [3] She was conferred the title of 'Bharata Kalai Sudar' in 2006. [8] 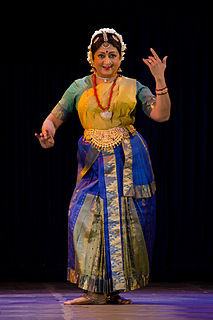 N. Rajam is an Indian violinist who performs Hindustani classical music. She remained Professor of Music at Banaras Hindu University, eventually became Head of the department and the Dean of the Faculty of Performing Arts of the University. 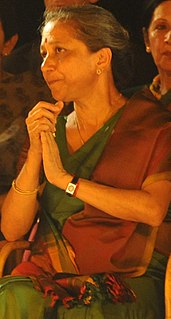 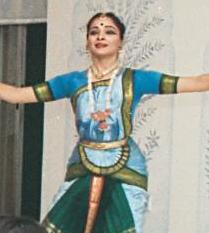 Malavika Sarukkai is an Indian classical dancer and choreographer specializing in Bharatanatyam. A 2002 winner of the Sangeet Natak Akademi Award, she was honoured by the Government of India in 2003 with Padma Shri, the fourth highest Indian civilian award.

Geeta Chandran is an Indian Bharatanatyam dancer and vocalist.