Savage Pampas (Spanish : Pampa bárbara) is a 1945 Argentine historical film directed by Lucas Demare and Hugo Fregonese and starring Francisco Petrone, Luisa Vehil and Domingo Sapelli. [1] The film's sets were designed by Germán Gelpi. The film is set in the nineteenth century in the Dry Pampas, when it represented a frontier between Argentinian-controlled territory and areas still largely inhabited by Indians before the Conquest of the Desert extended Argentine control southwards. In 1966, Fregonese remade the film in English under the same title.

A tough captain of the Argentine Army doggedly battles a band of outlaws composed of a mixture of Indians and Argentine deserters.

Monte Criollo is a 1935 Argentine musical film directed and written by Arturo S. Mom. It is a tango film and starred Nedda Francy and Francisco Petrone. 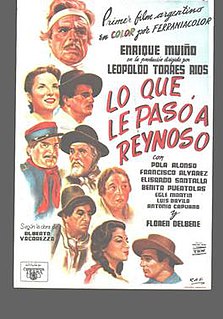 Lo que le pasó a Reynoso is a 1937 Argentine drama film directed and written by Leopoldo Torres Ríos. The film was based on a play by Alberto Vaccarezza and premiered in Buenos Aires on February 18, 1937. It starred Floren Delbene. 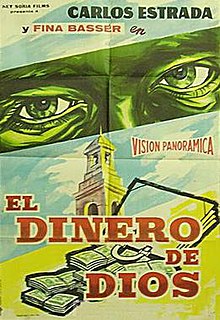 The Bad Life is a 1973 Argentine crime film directed by Hugo Fregonese.

Beyond the Sun is a 1975 Argentine biopic drama film directed by Hugo Fregonese. It is a biopic of an Argentine aviation pioneer. It was the final film of Fregonese who had been a leading Argentine director. 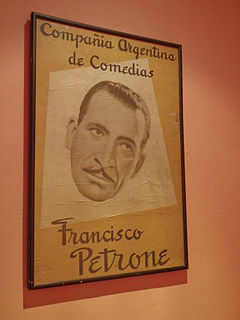 Francisco Petrone was an Argentine film actor. He is best known for his roles in the 1940s in the classic film La Guerra Gaucha (1942) and A Real Man (1943), for which he won the Silver Condor Award for Best Actor at the 1944 Argentine Film Critics Association Awards.

Luisa Vehil was an Uruguayan theater and movie actress who had a notable career in Argentina. She was an iconic figure in the Argentinian theatre scene. 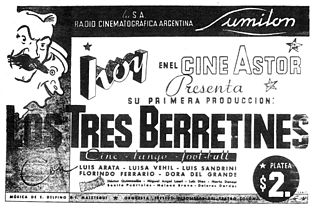 Los tres berretines is a 1933 Argentine black and white comedy film, the first film made by the newly formed Lumiton film studio, and one of the first sound films made in Argentina. It was a great success and launched the film career of the comedian Luis Sandrini.

Juan Moreira is a 1936 Argentine historical action film directed by Nelo Cosimi and starring Antonio Podestá, Domingo Sapelli and Guillermo Casali. The film is an adaptation of the 1879 novel Juan Moreira by Eduardo Gutiérrez, portraying the life of the nineteenth century guacho and outlaw Juan Moreira.

Domingo Sapelli (1895–1961) was a Uruguayan stage and film actor. After emigrating to Argentina he appeared in around fifty films during his career.

Savage Pampas may refer to:

Savage Pampas is a 1966 western film directed by Hugo Fregonese and starring Robert Taylor, Ron Randell and Marc Lawrence. The film was a co-production between Argentina, Spain and the United States, and was a remake of the 1945 Argentine film of the same title which Fregonese had co-directed. The film's location shooting took place in Spain, a popular location for westerns during the era. The film's action is set in the Argentinian Pampas around the time of the Conquest of the Desert.

Only the Valiant or The Charge of the Brave is a 1940 Argentine historical drama film directed by Adelqui Migliar and starring Santiago Arrieta, Domingo Sapelli and Anita Jordán. The film was one of the most expensive productions made in Argentina. It portrays the 1827 defence of Carmen de Patagones against Brazilian forces during the Cisplatine War.

Pampa Film was an Argentine film production company that was active in the 1930s and 1940s. It is known for its classic Prisioneros de la tierra (1939).