Last updated June 29, 2020
Queen Consort of Ava
In this Burmese name, Saw is an honorific, not a surname.

Saw Beza (Burmese : စောဘေဇာ, pronounced  [sɔ́ bèzà] ) was a queen consort of King Swa Saw Ke of Ava. She was the mother of King Minkhaung I of Ava, Gov. Theiddat of Sagaing, and Queen Thupaba Dewi of Hanthawaddy Pegu. [1]

The future queen was a commoner named Mi Beza from a small village named Gazun-Neint (ကန်စွန်းနိမ့်) near Mohnyin (in present-day Kachin State). King Swa met her at her village in the dry season of 1372–73 while he was on campaign to Mohnyin. The king took her as a concubine during the campaign. After the campaign, he told her to come to Ava (Inwa) if she bore him a son. She gave birth to a son (later King Minkhaung I) on 13 October 1373, after which she went to Ava. The king, as promised, raised her to queen. They had two more children. [2] 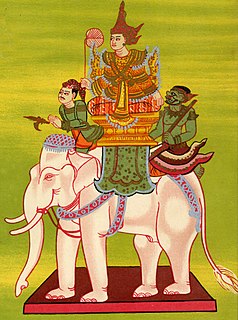 Mohnyin Thado was king of Ava from 1426 to 1439. The ethnic Burman saopha (chief) of Mohnyin came to power after overthrowing King Kale Kye-Taung Nyo and his queen Shin Bo-Me in 1426. His reign marks the plateauing of Ava's power. Left exhausted by the Forty Years' War with Hanthawaddy Pegu (Bago) in the south, and long-running wars against various Shan States in the north, Ava was no longer in a position to expand. Mohnyin Thado spent his 12-year reign keeping restive regions of Ava in one piece. He never controlled Toungoo. He had to tolerate the governors of other regions who treated him as at best a senior. Hanthwaddy aided the Toungoo rebellion in 1426 and seized the region in 1436. But the two kingdoms did not resume a full-scale war.

Theiddat was the heir-presumptive of Ava from 1400 to 1406 during the reign of King Minkhaung I of Ava. Theiddat was the key figure in securing his elder brother Minkhaung I's claim on the throne of Ava. In the early days of Minkhaung's reign, Theiddat personally led an army to put down a major rebellion. After Minkhaung named his eldest son Minye Kyawswa heir apparent in 1406, Theiddat felt betrayed, and fled south in 1407 and joined the service of King Razadarit of Hanthawaddy Pegu, which was amidst fighting the Forty Years' War (1385–1424) with Ava. 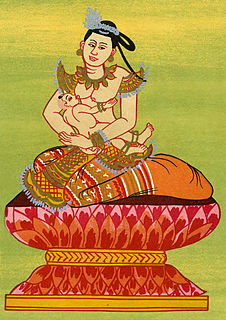 Thado Minsaw of Prome was the founder of Prome Kingdom, and reigned the minor kingdom from 1482 to 1526. In 1524, he entered into an alliance with the Confederation of Shan States, and participated in the 1525 sack of Ava (Inwa).

Atula Thiri Dhamma Dewi was the chief queen of King Minkhaung II of Ava. She was a granddaughter of King Mohnyin Thado, as well as a direct descendant of King Swa Saw Ke of Ava from her mother side.

Atula Thiri Maha Yaza Dewi of Ava was the chief queen consort of King Narapati I of Ava from 1442 to 1468. She was the mother of King Thihathura of Ava and King Thado Minsaw of Prome, and a maternal aunt of King Leik Munhtaw of Hanthawaddy. King Alaungpaya, the founder of Konbaung Dynasty, was a tenth generation descendant of the queen.

Min Pale was governor of Paukmyaing in the Kingdom of Ava in the late 14th century. He was a grandson of King Uzana I of Pinya, and was one of the four top commanders of King Swa Saw Ke of Ava. He was the paternal grandfather of King Mohnyin Thado. All the kings of the Konbaung Dynasty claimed descent from him.

Shin Saw was the chief queen consort of King Minkhaung I of Ava from 1400 to 1422. The royal chronicles identify her as Hsinbyushin.

Soe Min Wimala Dewi was a queen consort of King Binnya Ran I of Hanthawaddy. Soe Min was of Ava royalty, and was given to Binnya Ran in a marriage of state in 1431. Her title at Pegu was Thiri Pawara Maha Dhamma Yaza Dewi. She was the mother of King Leik Munhtaw of Hanthawaddy.

Minye Kyawhtin was a pretender to the Ava throne from 1426 to 1459. The eldest son of Crown Prince Minye Kyawswa, Minye Kyawhtin raised a long-running rebellion against King Mohnyin Thado and his successors, kings Minye Kyawswa I and Narapati I of Ava.