Sawyer International Airport( IATA : MQT, ICAO : KSAW, FAA LID : SAW) is a county-owned public-use airport in Marquette County, Michigan, United States. It is located 17 nautical miles (20 mi; 31 km) south of the central business district of the city of Marquette. [1] It is included in the Federal Aviation Administration (FAA) National Plan of Integrated Airport Systems for 2021–2025, in which it is categorized as a non-hub primary commercial service facility. [3]

This commercial and general aviation airport is located near Gwinn, on a portion of the former K. I. Sawyer Air Force Base, which closed in September 1995. The airport opened for passenger service in September 1999, serving Marquette and the surrounding area. It replaced the former Marquette County Airport ( IATA : MQT, ICAO : KMQT, FAA LID : MQT), which closed the same year.

In 2022, the airport sent out a survey to ask for input in a rebranding effort.

The airport is home to the Marquette County Aviation Wall of Honor, which features many influential pilots and engineers. [8]

In 2022, the airport received a $2.7 million grant from the U.S. Department of Transportation to repair hangars. [9]

The airline is planning on starting a significant renovation in 2023. $20 million will be allocated toward the project. Included in the project is a new fire suppression system in a military aircraft hangar, a terminal expansion, and new taxiway asphalt. The air traffic control tower will be upgraded in 2024, and new aircraft parking spaces will be added. The entire project could last until 2027. The project will also include security upgrades to be able to accept flights on bigger aircraft. [10]

Terminal upgrades will include an upgraded entrance, new art installations, new expansions, and a bigger size in general. The FAA will fund part of the project, including money from the federal CARES Act from the Covid-19 pandemic. The airport is collecting final funds in order to begin the project. [11]

The airport has already added new hangars to support airline operations at the airport. [12]

A number of unusable buildings will be torn down as part of the project.

MBS International Airport, located in Freeland, Michigan, is a commercial and general aviation airport serving the nearby cities of Midland, Bay City, and Saginaw. It is included in the Federal Aviation Administration (FAA) National Plan of Integrated Airport Systems for 2017–2021, in which it is categorized as a non-hub primary commercial service facility. 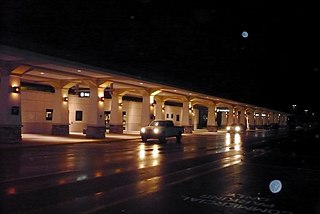 Grand Forks International Airport is a public airport five miles (8 km) northwest of Grand Forks, in Grand Forks County, North Dakota, United States. GFK has no scheduled passenger flights out of the country but has an "international" title because it has customs service for arrivals from Canada and other countries.

Easterwood Airport is a regional airport in College Station, Texas, with Texas A&M University, Bryan-College Station, and Brazos County, Texas as its communities. Reached from Farm-To-Market Road 60 West, it is 3 miles (4.8 km) southwest of the center of College Station, and 0.25 miles (0.40 km) from Texas A&M University. There is no public transportation from Easterwood Airport to the surrounding cities; however, in the fall of 2019, a new university bus route was established to connect Easterwood Airport with the Engineering Quad and the Texas A&M Hotel and Conference Center. The airport bus route is available only to those with a University ID or Brazos Transit District ID. Despite owning and managing the airport, there are no aviation courses at the university.

Burlington International Airport is a joint-use civil-military airport serving Burlington, Vermont, the state of Vermont's largest municipality. It is owned by the City of Burlington and located in the neighboring city of South Burlington, three nautical miles (6 km) east of Burlington's central business district. About 40% of the airport's passengers come from Quebec. 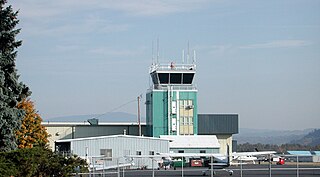 Troutdale Airport, also known as Troutdale-Portland Airport, is a corporate, general aviation and flight-training airport serving the city of Troutdale, in Multnomah County, Oregon, United States. It is one of four airports in the Portland metropolitan area owned and operated by the Port of Portland. Troutdale Airport was established in 1939.

Houghton County Memorial Airport is a county-owned public-use airport located four nautical miles southwest of the central business district of Calumet, a village in Houghton County, Michigan, United States. The airport is situated in the unincorporated community of Oneco in Franklin Township, near the village of Calumet on the Keweenaw Peninsula in northwest of the Upper Peninsula of Michigan. A limited scheduled commercial service is available, subsidized by the Essential Air Service program. In addition, Royale Air Service provides a seaplane service to Isle Royale National Park depending on traveler demand. 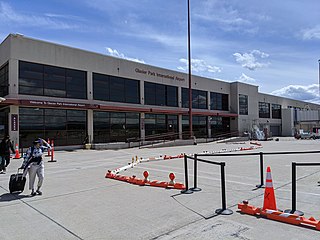 Glacier Park International Airport is in Flathead County, Montana, United States, six miles northeast of Kalispell. The airport is owned and operated by the Flathead Municipal Airport Authority, a public agency created by the county in 1974.

Arnold Palmer Regional Airport is in Westmoreland County, Pennsylvania, United States, two miles (3 km) southwest of Latrobe and about 33 miles (53 km) southeast of Pittsburgh. It was formerly Westmoreland County Airport; it was renamed in September 1999 for Arnold Palmer as part of his 70th birthday celebration. Palmer learned to fly at the airport, and the dedication ceremony included Governor Tom Ridge and a flyover of three A-10s of the Pennsylvania Air National Guard.

Taunton Municipal Airport, also known as King Field, is a public use airport located three nautical miles (6 km) east of the central business district of Taunton, a city in Bristol County, Massachusetts. It is located in the East Taunton neighborhood of the city. The city-owned airport is maintained and operated by the Taunton Airport Commission. According to the FAA's National Plan of Integrated Airport Systems for 2009–2013, it is categorized as a general aviation airport. 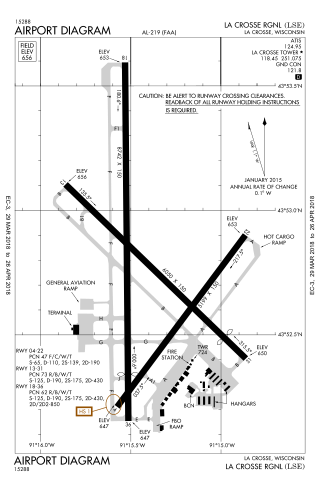 Central Wisconsin Airport, referred to as "C-Way", is a public airport located 3 nautical miles southeast of the central business district of Mosinee, in Marathon County, Wisconsin, United States. It is owned by Marathon County and Portage County. It is included in the Federal Aviation Administration (FAA) National Plan of Integrated Airport Systems for 2023–2027, in which it is categorized as a non-hub primary commercial service facility. It is the fifth busiest of eight commercial airports in Wisconsin in terms of passengers served.

Marquette County Airport is a former airport in Negaunee Township, Michigan. After the closure of the nearby K.I. Sawyer Air Force Base, the airport was closed and facilities were transferred to Sawyer International Airport. 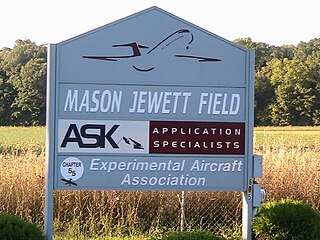 Mason Jewett Field is a public use airport located one nautical mile (1.85 km) southeast of the central business district of Mason, in Ingham County, Michigan, United States. It is owned and operated by the Capital Region Airport Authority, which also oversees the nearby Capital Region International Airport (LAN) in Lansing, Michigan.

Grayling Army Airfield is a public/military use airport located one nautical mile (1.85 km) northwest of the central business district of Grayling, in Crawford County, Michigan, United States. It is owned by United States Army. The airfield is located 7 miles (11 km) northeast of the main cantonment area of Camp Grayling. It is included in the Federal Aviation Administration (FAA) National Plan of Integrated Airport Systems for 2017–2021, in which it is categorized as a general aviation facility.

Livingston County Spencer J. Hardy Airport is a county-owned public-use airport located three miles (5 km) northwest of the central business district of Howell, a city in Livingston County, Michigan, United States. It is included in the Federal Aviation Administration (FAA) National Plan of Integrated Airport Systems for 2017–2021, in which it is categorized as a regional reliever airport facility. 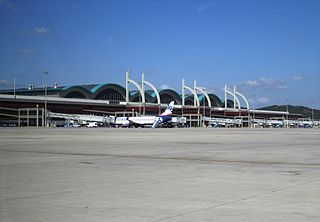 Istanbul Sabiha Gökçen International Airport is one of two international airports serving Istanbul, the largest city in Turkey. Located 32 km (20 mi) southeast of the city center, Sabiha Gökçen Airport is in the Asian part of the bi-continental Istanbul and serves as the hub for AnadoluJet and Pegasus Airlines. The facility is named after Sabiha Gökçen, adoptive daughter of Mustafa Kemal Atatürk and the first female fighter pilot in the world. Although Istanbul Airport, located 63 km (39 mi) west of the European side of Istanbul, is larger, Sabiha Gökçen is still one of the largest airports in the country.