The Scherzo No. 2 in B♭ minor, Op. 31 is a scherzo by Frédéric Chopin. The work was composed and published in 1837, and was dedicated to Countess Adèle Fürstenstein. Robert Schumann compared this scherzo to a Byronic poem, "so overflowing with tenderness, boldness, love and contempt." According to Wilhelm von Lenz, a pupil of Chopin, the composer said that the renowned sotto voce opening was a question and the second phrase the answer: "For Chopin it was never questioning enough, never soft enough, never vaulted (tombe) enough. It must be a charnel-house." [1] Huneker exults, "What masterly writing, and it lies in the very heart of the piano! A hundred generations may not improve on these pages." [1]

The beginning is marked Presto and opens in B♭ minor. However, most of the work is written in D♭ major. The opening to the piece consists of two arpeggiated pianissimo chords, and after a moment's pause, goes into a set of fortissimo chords, before returning to the quiet arpeggiated chords. The piece then goes to an arpeggio section which leads to the con anima. Then, the middle section appears in A major. After the middle section ends (modulating in B flat minor), the first section reappears with a coda. [2]

The piece is heard in the Woody Woodpecker episode "Musical Moments From Chopin". A fragment is also heard in the movie "Witness to murder", 1954, with Barbara Stanwyck. 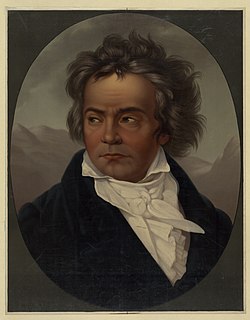 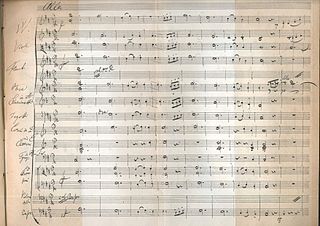 Franz Schubert's Symphony No. 8 in B minor, D 759, commonly known as the Unfinished Symphony, is a musical composition that Schubert started in 1822 but left with only two movements—though he lived for another six years. A scherzo, nearly completed in piano score but with only two pages orchestrated, also survives.

The Piano Sonata No. 18 in E♭ major, Op. 31, No. 3, is an 1802 sonata for solo piano by Ludwig van Beethoven. A third party gave the piece the nickname "The Hunt" due to one of its themes' resemblance to a horn call. A playful jocularity is maintained throughout the piece, but as in many of Beethoven's early works, the jocular style can be heard as a facade, concealing profound ideas and depths of emotion.

The Nocturnes, Op. 15 are a set of three nocturnes for solo piano written by Frédéric Chopin between 1830 and 1833. The work was published in January 1834, and was dedicated to Ferdinand Hiller. These nocturnes display a more personal approach to the nocturne form than that of the earlier Opus 9. The melodies and emotional depth of these nocturnes have thus been thought of as more "Chopinesque."

The Scherzo No. 1 in B minor, Op. 20, is a composition for solo piano written by Frédéric Chopin between 1831 and 1832 and dedicated to Thomas Albrecht. The piece begins with the tempo marking Presto con fuoco. The piece is dark, dramatic, and lively. It is complex and considered to be one of Chopin's more difficult works. 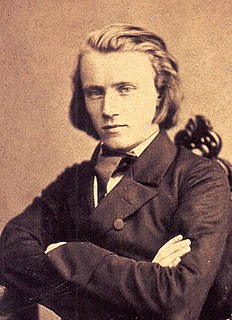 The Piano Trio No. 1 in B major, Op. 8, by Johannes Brahms was completed in January 1854, when the composer was only twenty years old, published in November 1854 and premiered on 13 October 1855 in Danzig. It has often been mistakenly claimed that the first performance had taken place in the United States. Brahms produced a revised version of the work in summer 1889 that shows significant alterations so that it may even be regarded as a distinct (fourth) piano trio. This “New Edition”, as he called it, was premiered on 10 January 1890 in Budapest and published in February 1891.

Frédéric Chopin's four scherzos are single-movement pieces for solo piano, composed between 1833 and 1843. They are often linked to Chopin's four ballades, composed in roughly the same period; these exceptional works are examples of large scale autonomous musical pieces, composed within the classical framework, but surpassing previous expressive and technical limitations. Unlike the classical model, the musical form adopted by Chopin is not characterised by humour or elements of surprise, but by highly charged "gestures of despair and demonic energy". Commenting on the first scherzo, Robert Schumann wrote: "How is 'gravity' to clothe itself if 'jest' goes about in dark veils?"