The Schichau-Werke (F. Schichau, Maschinen- und Lokomotivfabrik, Schiffswerft und Eisengießerei GmbH) was a German engineering works and shipyard based in Elbing, Germany (now Elbląg, Poland) on the Frisches Haff (Vistula Lagoon) of then-East Prussia. It also had a subsidiary shipyard in nearby Danzig (now: Gdańsk, Poland). Due to the Soviet conquest of eastern Germany, Schichau moved to Bremerhaven in March 1945, and its successors continued in business until 2009.

Ferdinand Schichau had studied engineering in Berlin, the Rheinland and Great Britain. In 1837, he founded the engineering institution, later known as F. Schichau GmbH, Maschinen- und Lokomotivfabrik (F. Schichau engineering and locomotive factory) in Elbing. It started with the production of hydraulic presses and diggers; in 1860, it began to produce locomotives for the Prussian Eastern Railway. From 1867 locomotive construction began in earnest, and three years later, the factory was connected to the railway network. In the early 20th century, the firm was one of several that built the Prussian P 8, the most numerous steam locomotive of its day.

From 1847, Schichau produced steam engines for ships, starting with the engine for the first entirely Prussian-built steamer James Watt (built by nearby Mitzlaff shipyard). In 1854, Schichau built the shipyard at Elbing, [1] known as the Elbinger Dampfschiffs-Reederei F. Schichau ('Elbing Steamship Shipping Company F. Schichau'). The first ship launched was the small steamer Borussia in 1855 – the first Prussian iron propeller ship. [1] The shipyard was subsequently expanded, and in 1872 Schichau acquired Mitzlaff's yard.

Since the shipyard's location on the Elbing River limited the size of ships that could be constructed, in 1892 Schichau built a second shipyard in Danzig, which was capable of producing bigger warships, up to battleship size, as well as freighters and passenger ships. Both shipyards also built ships for export worldwide, especially torpedo boats. In 1889 Schichau built a small repair shipyard in Pillau (now Baltijsk, Russia) near Königsberg (now Kaliningrad, Russia). Schichau's son-in-law, Carl Heinz Ziese, worked at Schichau-Werke and continued to run the business after Schichau's death in 1896, until 1917.

When Ziese died in 1917, the management of the company passed to the husband of his only daughter, Hildegard, the Swede Carl Carlson. After his death, Hildegard Carlson ran the firm. After World War I, the shipyard was threatened with bankruptcy and in 1929 it was bought by the German government. [1] In 1930, the company bought a small yard in Königsberg.

After the First World War, the Schichau works, together with the Union-Giesserei in Königsberg (that they later took over), was encouraged to focus on locomotive building with the aid of government subsidies known as Osthilfe ("Eastern Aid"). During the Second World War, the firm of Borsig placed several contracts with the Schichau-Werke in Elbing, that continued production until January 1945.

During World War II, Schichau built 94 U-boats for the Kriegsmarine (German Navy) at its Danzig shipyard. The yard in Elbing produced midget submarines of the Seehund class. In addition to the manufacture of Type VII C submarines, the shipyard in Danzig also built the revolutionary Type XXI U-boats. Up to 1944, 62 Type VII C U-boats (and two Type VII C/41s) were built, before production was switched to the Type XXI. A total of 30 submarines of this latter class were built and launched at Danzig by the end of the war, but never saw combat.

During World War II prisoners from Poland, France, the Netherlands, Lithuania, Latvia, Germany and Hungary were transported from satellite camps of Stutthof concentration camp near Danzig to work at Schichau. The prisoners received inadequate rations: half a litre of thin soup and 250 grams of bread per day. There was no winter clothing. Many of these forced laborers died as a result of epidemics, accidents, and beatings by the guards. Bodies were burned in a crematorium but also buried in mass graves at the cemetery in Saspe (now the Zaspa district of Gdańsk). [2]

Up to the end of the war in 1945, the Schichau-Werke had supplied about 4,300 locomotives of several classes to customers that included the Deutsche Reichsbahn and GEDOB formed from disbanded Polish State Railways. These included the DRG and DRB standard steam locomotive ( Einheitsdampflokomotive ) classes 23, 41, and DRB Class 52 Kriegslokomotive. [3] as well as DRG Class 86. The Schichau-Werke also designed the Class 24 and delivered its first two orders. [4]

After the war, the shipyards were acquired by Poland – to which the region was assigned by border changes promulgated at the Potsdam Conference. Postwar production included ships, railcars and boilers. The Schichau shipyard at Danzig was subsumed into the Lenin shipyard in 1950 and, in 1980, attracted worldwide media coverage as a result of protests led by the Solidarność trade union.

In early 1945, Schichau transferred a floating dock Flender Werke in Lübeck. In March 1945, as Soviet forces approached, Hermann Noë, the chief executive, and some employees fled Danzig with uncompleted ships to Bremerhaven. In April Noë founded there a new Schichau company. In the early postwar years, the company repaired machinery, agricultural engines, locomotives and trams. After the Western Allies lifted the ban on shipbuilding in West Germany in 1951, Schichau reopened its shipyard in Bremerhaven. 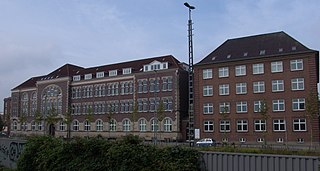 Aktien-Gesellschaft „Weser" was one of the major German shipbuilding companies, located at the Weser River in Bremen. Founded in 1872 it was finally closed in 1983. All together, A.G. „Weser" built about 1,400 ships of different types, including many warships. A.G. „Weser" was the leading company in the Deutsche Schiff- und Maschinenbau AG, a cooperation of eight German shipbuilding companies between 1926 and 1945.

Ferdinand Gottlob Schichau was a German mechanical engineer and businessman. 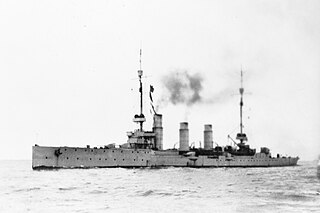 SMS Elbing was a light cruiser ordered by the Imperial Russian navy under the name Admiral Nevelskoy from the Schichau-Werke shipyard in Danzig in 1913. Following the outbreak of World War I, the ship was confiscated in August 1914 and launched on 21 November 1914 as SMS Elbing. She had one sister ship, Pillau, the lead ship of their class. The ship was commissioned into the High Seas Fleet in September 1915. She was armed with a main battery of eight 15 cm SK L/45 guns and had a top speed of 27.5 kn.

Deutsche Schiff- und Maschinenbau Aktiengesellschaft was a cooperation of eight German shipyards in the period 1926 to 1945. The leading company was the shipyard AG Weser in Bremen.

Schichau Seebeckwerft was a German shipbuilding company, headquartered in Bremerhaven. The name comes from the 1988 merger of Schichau with Seebeckwerft. 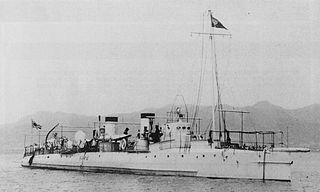 The Pillau class of light cruisers was a pair of ships built in Germany just before the start of World War I. The class consisted of SMS Pillau and Elbing. The ships were initially ordered for the Imperial Russian Navy in 1912, and were built by the Schichau-Werke shipyard in Danzig. After the outbreak of World War I, however, the German Kaiserliche Marine confiscated the ships before they were completed. The ships were similar in design to other German light cruisers, although they lacked an armored belt. They were the first German light cruisers to be equipped with 15 cm SK L/45 guns, of which they carried eight. The two ships had a top speed of 27.5 knots.

SM U-115 was a German Type U 115 U-boat of the Imperial German Navy built at Schichau-Werke, Elbing. As her sister ship SM U-116, she was never completed and ultimately broken up in Danzig after the armistice. Her main engines were used in M/S Adolf Sommerfeld ex SMS Gefion. Both boats had been offered to the IGN free of charge by Schichau in an attempt to gain experience in building submarines. When construction of the two boats began to lag behind due to shortages in raw materials and lack of experience in submarine construction they were declared "war boats" (Kriegsboote), formally ordered by the Reichsmarineamt and given their respective designation. On 20 October 1918 Schichau-Werke reported U 115 would not be ready for delivery until the spring of 1919. Nevertheless 14 more boats of the class were ordered on 29 June 1918 for delivery in 1919.

Masuren was a 2,385 ton cargo ship which was built in 1935. She was seized by Britain in 1945 and renamed Empire Annan. In 1950 she was renamed Thomas N Epiphaniades and then Helga Böge in 1952. In 1959, she was renamed Fuhlsbüttel. She served until 1964 when she was scrapped in Bremerhaven.

SMS S31 was a 1913 Type Large Torpedo Boat of the Imperial German Navy. Commissioning in August 1914, she served during World War I and was sunk by a mine during the Battle of the Gulf of Riga on 19 August 1915.

Torpedo boats had been operated by the Imperial German Navy from the very beginning. The "Imperial Navy" existed between 1871 and 1919. In 1870 there had been 14 tugboats and harbour vessels and 7 rowing boats, which had been armed with spar torpedoes to protect the Elbe and Weser during the Franco-Prussian War.

SMS S32 was a V25-class large torpedo boat of the Imperial German Navy that served during the First World War. She was built by the Schichau-Werke shipyard in Elbing, East Prussia, being launched on 28 February 1914 and was completed in September that year.

Two torpedo boats of the Imperial German Navy, both built by Schichau-Werke at their Elbing shipyard have been named SMS S31:

SMS S13 was a V1-class torpedo boat of the Imperial German Navy. The ship was built by Schichau-Werke, at their Elbing shipyard, completing in 1912. She served in the First World War with the German High Seas Fleet, taking part in the Battle of the Heligoland Bight in 1914. She was sunk by an accidental explosion on 6 November 1914.

SMS Natter was a torpedo boat of the Austro-Hungarian Navy. Natter was built by the German shipbuilder Schichau-Werke between 1895 and 1896. She was renamed Torpedoboot 18 in 1910 and used for local coast defence during the First World War. She was scrapped in 1920.

SMS S14 was a V1-class torpedo boat of the Imperial German Navy. She served with the German High Seas Fleet at the start of the First World War, and was sunk by an internal explosion on 19 February 1915.

SMS S16 was a V1-class torpedo boat of the Imperial German Navy. The ship was built by Schichau-Werke, at their Elbing shipyard, completing in 1912. S16 served with the German High Seas Fleet during the First World War, taking part in the Battle of Jutland in 1916. She was sunk by a mine on 20 January 1918.

SMS S17 was a V1-class torpedo boat of the Imperial German Navy. The ship was built by Schichau-Werke, at their Elbing shipyard, completing in 1912. S17 served with the German High Seas Fleet during the First World War, taking part in the Battle of Jutland in 1916. She was sunk by a mine on 16 May 1917.