Last updated May 19, 2021
Notation that defines regular polytopes and tessellations

In geometry, the Schläfli symbol is a notation of the form

that defines regular polytopes and tessellations.

The Schläfli symbol is named after the 19th-century Swiss mathematician Ludwig Schläfli, [1] :143 who generalized Euclidean geometry to more than three dimensions and discovered all their convex regular polytopes, including the six that occur in four dimensions.

The Schläfli symbol is a recursive description, [1] :129 starting with {p} for a p-sided regular polygon that is convex. For example, {3} is an equilateral triangle, {4} is a square, {5} a convex regular pentagon and so on.

Regular star polygons are not convex, and their Schläfli symbols {p/q} contain irreducible fractions p/q, where p is the number of vertices, and q is their turning number. Equivalently, {p/q} is created from the vertices of {p}, connected every q. For example, {5⁄2} is a pentagram; {5⁄1} is a pentagon.

Regular polytopes can have star polygon elements, like the pentagram, with symbol {5⁄2}, represented by the vertices of a pentagon but connected alternately.

Usually, a facet or a vertex figure is assumed to be a finite polytope, but can sometimes itself be considered a tessellation.

In addition to describing Euclidean polytopes, Schläfli symbols can be used to describe spherical polytopes or spherical honeycombs. [1] :138

Schläfli's work was almost unknown in his lifetime, and his notation for describing polytopes was rediscovered independently by several others. In particular, Thorold Gosset rediscovered the Schläfli symbol which he wrote as | p | q | r | ... | z | rather than with brackets and commas as Schläfli did. [1] :144

The Schläfli symbol of a (convex) regular polygon with p edges is {p}. For example, a regular pentagon is represented by {5}.

The Schläfli symbol of a regular polyhedron is {p,q} if its faces are p-gons, and each vertex is surrounded by q faces (the vertex figure is a q-gon).

For example, {5,3} is the regular dodecahedron. It has pentagonal (5 edges) faces, and 3 pentagons around each vertex.

Topologically, a regular 2-dimensional tessellation may be regarded as similar to a (3-dimensional) polyhedron, but such that the angular defect is zero. Thus, Schläfli symbols may also be defined for regular tessellations of Euclidean or hyperbolic space in a similar way as for polyhedra. The analogy holds for higher dimensions.

For example, the hexagonal tiling is represented by {6,3}.

There is one regular tessellation of Euclidean 3-space: the cubic honeycomb, with a Schläfli symbol of {4,3,4}, made of cubic cells and 4 cubes around each edge.

There are also 4 regular compact hyperbolic tessellations including {5,3,4}, the hyperbolic small dodecahedral honeycomb, which fills space with dodecahedron cells.

If the sequence is palindromic, i.e. the same forwards and backwards, the polytope is self-dual. Every regular polytope in 2 dimensions (polygon) is self-dual.

Uniform prismatic polytopes can be defined and named as a Cartesian product (with operator "×") of lower-dimensional regular polytopes.

The prismatic duals, or bipyramids can be represented as composite symbols, but with the addition operator, "+".

Pyramidal polytopes containing vertices orthogonally offset can be represented using a join operator, "∨". Every pair of vertices between joined figures are connected by edges.

When mixing operators, the order of operations from highest to lowest is ×, +, ∨.

Axial polytopes containing vertices on parallel offset hyperplanes can be represented by the || operator. A uniform prism is {n}||{n} and antiprism {n}||r{n}.

Coxeter expanded his usage of the Schläfli symbol to quasiregular polyhedra by adding a vertical dimension to the symbol. It was a starting point toward the more general Coxeter diagram. Norman Johnson simplified the notation for vertical symbols with an r prefix. The t-notation is the most general, and directly corresponds to the rings of the Coxeter diagram. Symbols have a corresponding alternation, replacing rings with holes in a Coxeter diagram and h prefix standing for half, construction limited by the requirement that neighboring branches must be even-ordered and cuts the symmetry order in half. A related operator, a for altered, is shown with two nested holes, represents a compound polyhedra with both alternated halves, retaining the original full symmetry. A snub is a half form of a truncation, and a holosnub is both halves of an alternated truncation.

Alternations have half the symmetry of the Coxeter groups and are represented by unfilled rings. There are two choices possible on which half of vertices are taken, but the symbol doesn't imply which one. Quarter forms are shown here with a + inside a hollow ring to imply they are two independent alternations.

Altered and holosnubbed forms have the full symmetry of the Coxeter group, and are represented by double unfilled rings, but may be represented as compounds. 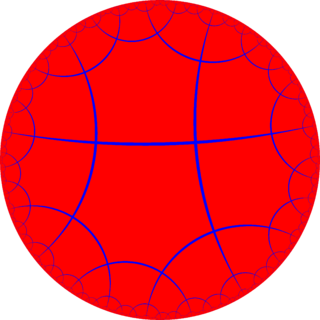 In geometry, the order-4 hexagonal tiling is a regular tiling of the hyperbolic plane. It has Schläfli symbol of {6,4}. 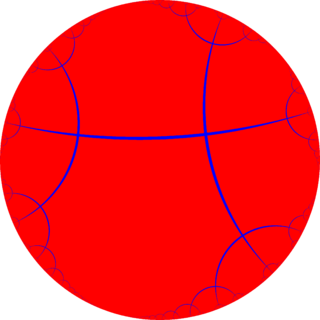 In geometry, the order-4 apeirogonal tiling is a regular tiling of the hyperbolic plane. It has Schläfli symbol of {∞,4}. 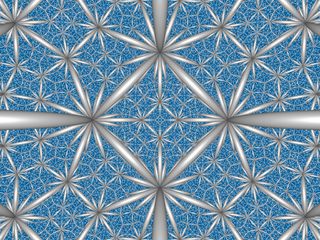 The order-6 cubic honeycomb is a paracompact regular space-filling tessellation in hyperbolic 3-space. It is paracompact because it has vertex figures composed of an infinite number of facets, with all vertices as ideal points at infinity. With Schläfli symbol {4,3,6}, the honeycomb has six ideal cubes meeting along each edge. Its vertex figure is an infinite triangular tiling. Its dual is the order-4 hexagonal tiling honeycomb. 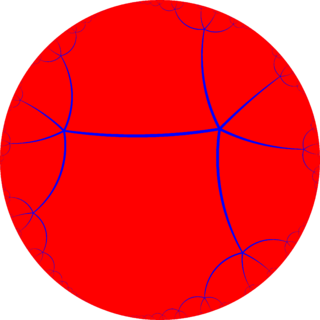 In geometry, the order-5 apeirogonal tiling is a regular tiling of the hyperbolic plane. It has Schläfli symbol of {∞,5}.