listen )) is a town in Brandenburg, in northeastern Germany. With the official status of a Große kreisangehörige Stadt (major district town), it is the largest town of the Uckermark district, located near the river Oder, which forms the border with Poland.

The formerly agrarian town today has one of the largest oil refineries (PCK Raffinerie GmbH) in Germany, established in 1958 and connected to the Russian Druzhba pipeline network. [3] The refinery uses 20 million cubic meters of water per year for the process. [4]

A large paper factory ( UPM ) is located near Schwedt. [5] Most industries were located in the remote area during communist rule in the 1960s and 1970s.

Large residential areas were built for the workers moving to Schwedt. About 9% of the town's flats are in prefab concrete buildings ( Plattenbau ) dating from the era. As many jobs were lost after German reunification and the return to market economy, Schwedt has lost a quarter of its population since 1990. In recent decades, Schwedt became a model town for the demolition of Plattenbau housing to combat urban decay.

Schwedt is situated in the east of the historic Uckermark region stretching from the Oder to the Havel River. It is situated on a sandur at the western edge of the Oder floodplain running along the German-Polish border, which in 1995 was declared as the Lower Oder Valley National Park nature reserve. Across the river and the border, about 10 km (6.2 mi) to the southeast, is the Polish town of Chojna. The nearest German towns are Angermünde (about 18 km (11 mi) to the west) and Gartz (18 km (11 mi) down the Oder).

After the Migration Period, the area had been settled by Polabian Slavs. From 937 onwards the lands of the Slavic Ukrani tribes in the west were subdued by the Saxon forces of Margrave Gero and incorporated into his vast Marca Geronis , while the lands east of the Oder were held by Pomeranian tribes under sovereignty of the newly formed Duchy of Poland ruled by Duke Mieszko I. The Saxon Northern March was lost in the Great Slav Rising of 983, and not before 1147 the Saxon count Albert the Bear again invaded the lands on the Oder river, which remained disputed between the newly established Margraviate of Brandenburg and the Pomeranian dukes.

The settlement of Schwedt was first mentioned in a 1265 deed. In the course of the Brandenburg–Pomeranian conflict, the Brandenburg margrave Louis II the Roman ceded it to Duke Barnim III of Pomerania in 1354. It was again besieged by the first Hohenzollern margrave Frederick I in 1434, but to no avail. In 1481 the Thuringian counts of Hohnstein acquired the estates; they granted town privileges to Schwedt as well as to neighbouring Vierraden and introduced the Protestant Reformation.

The rise of Schwedt came to an end with the extinction of the Hohnstein counts in 1609 and the disastrous Thirty Years' War, when the town on the road from Stettin to Berlin was plundered several times. In 1631 King Gustavus Adolphus of Sweden, after landing in Pomerania, camped here on his way to the Battle of Breitenfeld. Six years later the Swedish field marshal Johan Banér set the town on fire, after its citizens refused to capitulate.

During the Great Northern War, the Treaty of Schwedt was signed in the town.

Near the end of World War II, over two months of heavy fighting destroyed an estimated 85 percent of the town, including the Schwedt Castle. The Soviet Army occupied Schwedt on April 26, 1945, two weeks before the final defeat of Nazi Germany. [6] Afterwards it formed part of East Germany. During the 1960s, the government of the DDR expanded housing and encouraged people to move to Schwedt, a trend that ended with the fall of Communism.

Schwedt is twinned with: [8]

Uckermark is a Kreis (district) in the northeastern part of Brandenburg, Germany. Neighbouring districts are Barnim and Oberhavel, the districts Mecklenburgische Seenplatte and Vorpommern-Greifswald in Mecklenburg-Vorpommern, and to the east Poland. It is one of the largest districts of Germany areawise. The district is named after the historical region of Uckermark.

Gryfino is a town in Pomerania, northwestern Poland, with 21,393 inhabitants (2017). It is also the capital of Gryfino County in West Pomeranian Voivodeship, previously in Szczecin Voivodeship (1975–1998).

Prenzlau is a town in Brandenburg, Germany, the administrative seat of Uckermark District. It is also the centre of the historic Uckermark region.

Gartz is a town in the Uckermark district in Brandenburg, Germany. It is located on the West bank of the Oder River, on the border with Poland, about 20 km south of Szczecin, Poland. It is located within the historic region of Western Pomerania. 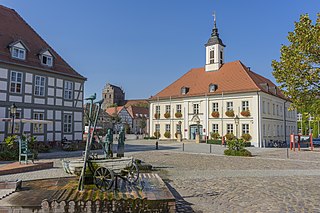 Angermünde is a town in the district of Uckermark in the state of Brandenburg, Germany. It is about 43 miles (69 km) northeast of Berlin, the capital of Germany.

Templin is a small town in the Uckermark district of Brandenburg, Germany. Though it has a population of only 17,127 (2006), in terms of area it is, with 377.01 km2, the second largest town in Brandenburg and the seventh largest town in Germany. The town is located in the south of the rural Uckermark region and its capital Prenzlau, north of the Schorfheide-Chorin Biosphere Reserve. The municipality comprises the villages of Ahrensdorf, Bebersee, Beutel, Densow, Gandenitz, Gollin, Gross Dölln, Gross Väter, Grunewald, Hammelspring, Herzfelde, Hindenburg, Klosterwalde, Petznick, Röddelin, Storkow and Vietmannsdorf. 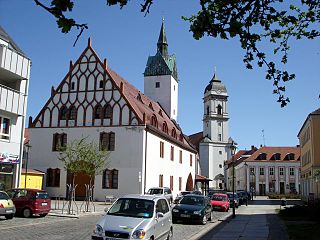 Fürstenwalde/Spree is the most populous town in the Oder-Spree District of Brandenburg, Germany.

Chojnapronounced [ˈxɔi̯na] is a small town in northwestern Poland in the West Pomeranian Voivodeship. It lies approximately 60 kilometres south of Szczecin. As of December 2021, the town has a population of 7,330.

Friedland is a town in the Oder-Spree district, in Brandenburg, Germany. It is situated in the historic Lower Lusatia region, about 8 km (5.0 mi) south of Beeskow, and 39 km (24 mi) north of Cottbus.

Vierraden was the name of a small town in the northeast of the German state of Brandenburg.

Moryń is a town in Gryfino County, West Pomeranian Voivodeship, in northwestern Poland. 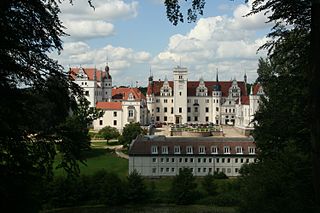 Boitzenburger Land is a municipality in the Uckermark district, in Brandenburg, Germany.

Mescherin is a municipality in the Uckermark district, in Brandenburg, in north-eastern Germany. It is located on the western shore of the Oder river and the German-Polish border.

Amt Gartz (Oder) is an Amt in the district of Uckermark, in Brandenburg, Germany. Its seat is in Gartz.

Gmina Chojna is an urban-rural gmina in Gryfino County, West Pomeranian Voivodeship, in north-western Poland, on the German border. Its seat is the town of Chojna, which lies approximately 32 kilometres (20 mi) south of Gryfino and 52 km (32 mi) south of the regional capital Szczecin.

Gmina Moryń is an urban-rural gmina in Gryfino County, West Pomeranian Voivodeship, in north-western Poland. Its seat is the town of Moryń, which lies approximately 44 kilometres (27 mi) south of Gryfino and 64 km (40 mi) south of the regional capital Szczecin.

The Uckermark is a historical region in northeastern Germany, currently straddles the Uckermark District of Brandenburg and the Vorpommern-Greifswald District of Mecklenburg-Vorpommern. Its traditional capital is Prenzlau.

Swobnica is a village in the administrative district of Gmina Banie, within Gryfino County, West Pomeranian Voivodeship, in north-western Poland.

Wikimedia Commons has media related to Schwedt .
This page is based on this Wikipedia article
Text is available under the CC BY-SA 4.0 license; additional terms may apply.
Images, videos and audio are available under their respective licenses.