listen ); Mecklenburgian Low German: Swerin; Latin: Suerina, Suerinum) is the capital and second-largest city of the northeastern German state of Mecklenburg-Vorpommern as well as of the region of Mecklenburg, after Rostock. It has around 96,000 inhabitants, and is thus the least populous of all German state capitals.

Schwerin is located on the southwestern shore of Lake Schwerin (German:Schweriner See), one of the largest lakes of the Mecklenburg Lake Plateau, and there are eleven other lakes within its city limits. The city is surrounded by the district of Northwestern Mecklenburg to the north, and the district of Ludwigslust-Parchim to the south. Schwerin lies in the east of the Hamburg Metropolitan Region. The name of the city is of Slavic origin, deriving from the root zvěŕ (wild animal) or zvěŕin ( game reserve , animal garden, stud farm ).

Schwerin is enclosed by lakes. The largest of these lakes, the Schweriner See , has an area of 60 km2. In the middle part of these lakes there was a settlement of the Slavic Obotrite (dated back to the 11th century). The area was called Zuarin (Polabian Zwierzyn), and the name Schwerin is derived from that designation. In 1160, Henry the Lion defeated the Obotrites and captured Schwerin. The town was later expanded into a powerful regional centre. A castle was built on this site, and expanded to become a ducal palace. It is supposedly haunted by the small, impious ghost, called Petermännchen ("Peterman").

In the mid-1800s, many residents from Schwerin moved to the United States, many to Milwaukee, Wisconsin. Today Milwaukee and Schwerin are sister cities. After 1918, and during the German Revolution, resulting in the fall of all the German monarchies, the Grand Duke abdicated. Schwerin became capital of the Free State of Mecklenburg-Schwerin thereafter.

At the end of World War II, on 2 May 1945, Schwerin was taken by United States troops. It was turned over to the British on 1 June 1945, and one month later, on 1 July 1945, [2] it was handed over to the Soviet forces, as the British and American forces pulled back from the line of contact to the predesignated occupation zones.

Schwerin was then in the Soviet Occupation Zone which was to become the German Democratic Republic (GDR). Initially, it was the capital of the State of Mecklenburg which at that time included the western part of Pomerania (Vorpommern). After the states were dissolved in the GDR, in 1952, Schwerin served as the capital of the Schwerin district (Bezirk Schwerin).

After reunification in 1990, the former state of Mecklenburg-Vorpommern was recreated as one of the Bundesländer . Rostock was a serious contender for state capital but the decision went in favour of Schwerin.

The urban area of Schwerin is divided into 18 local districts, [3] each with a local council. The districts consist of one or more districts. The local councilors have between 5 and 15 members depending on the number of inhabitants.

The eighteen current districts are the following:

City buses and trams are run by NVS (Nahverkehr Schwerin). [4]

Schwerin Hauptbahnhof (central station) is connected by rail to Berlin, Hamburg and Rostock.

According to the official 2007 Crime Report for Germany, Schwerin was the only German city with a crime rate over 17,000 total offenses committed per 100,000 inhabitants; [5] thus being 1st in the list of Germany's most dangerous cities. The larger cities, such as Berlin, Frankfurt am Main, or Bremen, all have crime rates ranging from 14,000 to 16,000 total offenses committed per 100,000 people. However, Schwerin is the only city where riding a bus (or tram) without a ticket and social security fraud is counted towards the crime rate, significantly boosting the numbers. [6]

Schwerin is twinned with: [7] 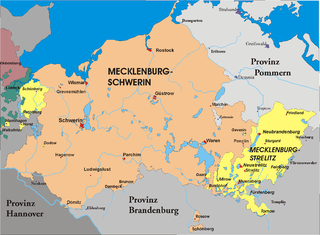 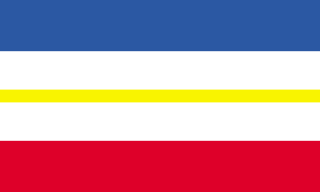 Ludwigslust is a central castle town of Mecklenburg-Vorpommern, Germany, 40 km south of Schwerin. Since 2011 it has been part of the Ludwigslust-Parchim district.

Güstrow is a town in Mecklenburg-Vorpommern, Germany. It is capital of the Rostock district; Rostock itself is a district-free city and regiopolis.

Schwerin Castle, is a schloss located in the city of Schwerin, the capital of Mecklenburg-Vorpommern state, Germany. It is situated on an island in the city's main lake, Lake Schwerin. 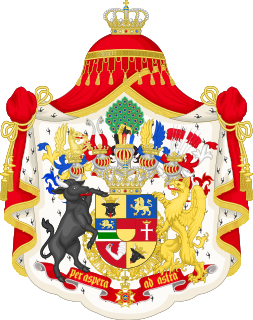 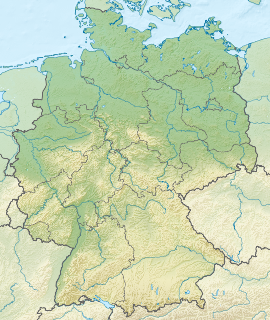 Lake Schwerin is a lake in Mecklenburg-Vorpommern, northern Germany. It was named after the city Schwerin, on its southwestern shore. The smaller town Bad Kleinen is on the north shore of the lake. Its surface is approximately 61.54 square kilometres (23.76 sq mi), and its maximum depth is 52.4 metres (172 ft). The natural outflow of the lake is the (channelized) river Stör, a tributary of the Elde, and part of the Elbe watershed. The Wallensteingraben, a 16th-century canal, connects the lake with the Baltic Sea at Wismar. 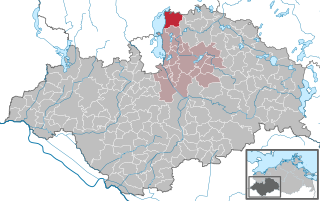 Dobin am See is a municipality in the Ludwigslust-Parchim district, in Mecklenburg-Vorpommern, Germany.

Mecklenburg Castle was a medieval castle and a residential capital of the Nakonid and Nikloting dynasties of the Obotrites. It was located just south of the modern village Dorf Mecklenburg, seven kilometres south of the Bay of Wismar in Mecklenburg-Vorpommern, Germany. The only remnants of the ruined castle are parts of an earthen wall. Some scholars have associated Mecklenburg with the medieval trading emporium Reric.

The Ludwigslust–Wismar railway is an electrified railway in the German state of Mecklenburg-Vorpommern. The Ludwigslust–Bad Kleinen section of the line is double track. The line was opened in 1848, by the Mecklenburg Railway Company and is one of the oldest railways in Germany.

The Bad Kleinen–Rostock railway is a double track electrified railway in the German state of Mecklenburg-Vorpommern. The Ludwigslust–Bad Kleinen section of the line is double track. The line was opened in 1850 by the Mecklenburg Railway Company and is one of the oldest railways in Germany and is part of the Leipzig–Magdeburg–Schwerin–Rostock main line.

The Schwerin tramway network is a network of tramways forming the key feature of the public transport system in Schwerin, the capital city of the federal state of Mecklenburg-Vorpommern, Germany.

Blankenberg (Meckl) station is a railway junction in the German state of Mecklenburg-Vorpommern. The station was opened on 13 May 1850 and is one of the oldest railway stations in this state. It is at the intersection of the Bad Kleinen–Rostock and the Wismar–Karow railways. Regular passenger services run only on the former route. Most of the Wismar–Karow railway is closed, but between Blankenberg, Sternberg and Dabel there are occasional freight trains.