A schwibbogen (German pronunciation: [ʃʋəb'boːɡən], from Middle High German swiboge, "to hover") is a decorative candle-holder from the Ore Mountains (Erzgebirge) region of Saxony, Germany. The first metal schwibbogen was made in 1740 in Johanngeorgenstadt. The early candle arches consisted of a single forged piece of black metal which could be painted. The number of candles varies with the size of the arc, the original design holding eleven. In the UK candle arches or candle bridges are marketed, often just consisting of a simple wooden stepped arch with 7 electric candles.[ citation needed ] These are not strictly schwibbögen.

The development of the schwibbogen arch is closely related to the mining traditions of the ore mountains. It most likely developed as a candle holder made from metal for the Christmas shift (Mettenschicht), a common dinner celebrated by miners, the mining foreman ( Steiger ) and the smith who had been responsible for the mining tools throughout the year. [1] It bears symbols commonly associated with the life and wishes of the miners.

The most famous design was created by Paula Jordan in 1937 for a show in Schwarzenberg. It depicted the three main sources of income of the people in the region in the 18th and 19th century. Thus the schwibbogen showed apart from some traditional symbols; two miners, a wood carver, a bobbin lace maker, a Christmas Tree, two miner's hammers, two crossed swords, and an angel. It holds seven candles. Contrary to popular belief the candle holder was always associated with Christmas. The light symbolizes the longing of the miners who didn't see the daylight in winter for weeks sometimes due to their long working hours below the surface. During the Christmas shift, the lights may also have represented the safety lamps of all the comrades from the mining team who had completed the year of dangerous work in the mine. [2]

Over time the designs changed. After World War II the schwibbogen has reached not only a new popularity, but had changed a lot in its looks. Modern designs are typically made out of wood, and depict historical or religious scenes. Other designs include landscapes, skylines and advertisements, retaining some link to Christmas traditions

Especially in the Ore Mountains the windows of the houses in villages and towns feature a lit candle arch—usually with the traditional designs or at least local scenes. The town of Seiffen is particularly noted for its production of schwibbogen in its craft shops. [3] 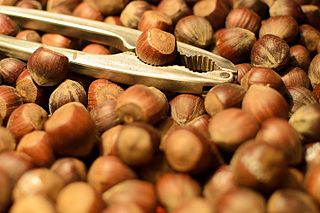 A nutcracker is a tool designed to open nuts by cracking their shells. There are many designs, including levers, screws, and ratchets. The lever version is also used for cracking lobster and crab shells. 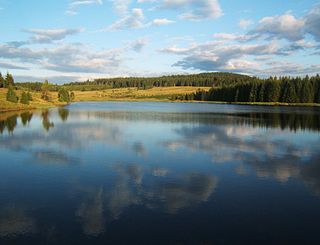 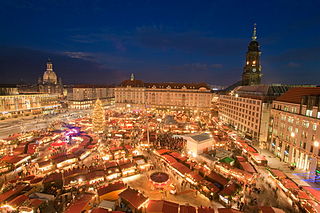 The Striezelmarkt in Dresden is one of the first genuine Christmas markets in the world. Founded as a one-day market in 1434, it celebrated its 585th anniversary in 2019. Its 240 stands attract about 3 million visitors from all over the world. The annual market lasts throughout the Advent season until Christmas Eve. 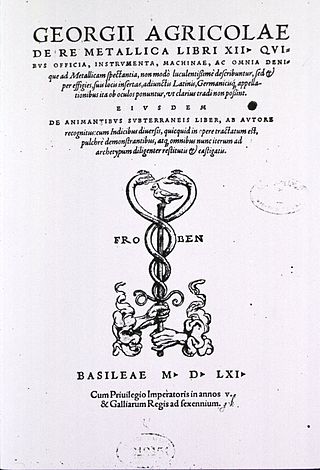 De re metallica is a book in Latin cataloguing the state of the art of mining, refining, and smelting metals, published a year posthumously in 1556 due to a delay in preparing woodcuts for the text. The author was Georg Bauer, whose pen name was the Latinized Georgius Agricola. The book remained the authoritative text on mining for 180 years after its publication. It was also an important chemistry text for the period and is significant in the history of chemistry.

The 140-kilometre-long road, the Silver Road is the first and longest holiday route in the German Free State of Saxony. Against the background of the importance of mining in the history of Saxony, the road links those sights and tourist attractions of the Ore Mountains and its foreland that relate to the centuries-old mining and smelting industries of the region.

Christmas pyramids are Christmas decorations that have their roots in the folklore and customs of the Ore Mountain region of Germany, but which have become popular internationally. They comprise a decorated pyramidal outer frame with candle holders and a central carousel with a rotor at the top which is driven by warm air from the lit candles. The carousel is decorated with nativity scenes and other Christmas figures such as angels and wise men, as well as worldly motifs such as mining folk and forest scenes.

The town of Seiffen is located in the district of Erzgebirgskreis, which is in the central south of the Free State of Saxony in Germany. The earliest record of the town dates to 1324 when it was referred to as "Cynsifen".

The Räuchermann, erzgebirgisch Raachermannel is an incense smoker, the invention of toy makers in the Ore Mountains, used to burn down cone incense, known as Räucherkerzchen.

Ore Mountain folk art is a well-known form of highly artistic wood carving from East Germany. It encompasses the diverse forms of expression of the creative work beyond the classical or the modern arts, and in particular the production of figures, sculptures and paintings. In a broader sense, the people's poetry, literature, and the Ore Mountain songs are in itself the folk art. The Ore Mountains claim to be the largest, enclosed folk art area in Germany.

The Mettenschicht is an old German mining custom in the Ore Mountains. It is the name given to the last shift worked before Christmas, which ends early with a celebration and meal. 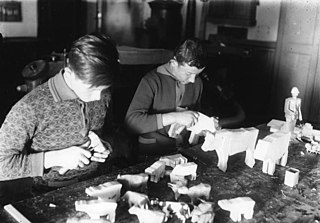 The history of wooden toymaking in the Ore Mountains is closely bound to regional circumstances. The Ore Mountains are located in Central Europe on the border between Germany and the Czech Republic. For many centuries it was a countryside in which the local population eked out a hard existence from the land. Long and harsh winters restricted agriculture; in addition the region had very poor communications. With the onset of ore mining a new line of commerce developed, but the hard labour and high risks involved meant that it was only work for young and strong men. Many were injured or died as a result of accidents. The miners rose early in the morning whilst it was still dark in order to go to work and did not return home again until late in the evening after dark. From those times comes a custom that has survived to the present day, the practice of placing lights in the window. These lights were intended to show the miners the safe way back to the homes of their families.

Reifendrehen is a unique type of toy manufacture using wood turning techniques that was developed in the Ore Mountains in the vicinity of the town of Seiffen and continues there to the present day. The process produces small animals and other figures or even little wooden houses in outline, that are used as toys or to decorate Christmas pyramids or Nativity scenes. The animals and figures so produced are an inherent part of Ore Mountain folk art. 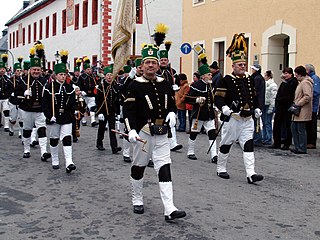 The Miners' Parade is a parade traditionally held in places in Germany where ore was and is smelted. It was and is a public event held by a community or corporation whose employment is linked to mining and smelting. It is usually known in German as a Bergparade, but also as a Berg- und Hüttenparade. It takes place as one of the highlights of a festival. The Miner's Parade is a special form of procession which is organised to march past important dignitaries or which is organized for such high-ranking individuals.

A miner's figure is a traditional Christmas decoration from the Ore Mountains of central Europe. Miners' figures are turned or carved out of wood, and often bear two candles. They are usually displayed together with an angelic figure, also bearing a candle. This pair is intended to symbolize the relationship between man and woman or the worldly and spiritual aspects of life.

In German-speaking countries, the miner's toolset is known as a Gezähe formerly also abbreviated to Gezäh. It is a set of personally-owned mining tools and equipment needed by the miner in his daily work.

Hidalgo (state) handcrafts and folk art are mostly made for local consumption rather than for collectors, although there have been efforts to promote this work to a wider market. Most are utilitarian and generally simply decorated, if decorated at all. The most important handcraft traditions are pottery, especially in the municipality of Huejutla and textiles, which can be found in diverse parts of the state. Most artisans are indigenous, with the Otomi populations of the Mezquital Valley being the most dominant. Other important handcrafts include basketry, metal and wood working.

Auguste Müller was a German folk carver, who was involved in Seiffen's traditional wooden toymaking. Her works made from waste wood are now counted among the most valuable pieces of Ore Mountain folk art. She followed in her father's footsteps as a toymaker. Müller was noted for her use of metaphor in her carvings, which she made with a particular sensitivity. The Erzgebirgisches Spielzeugmuseum in Seiffen is in possession of some of her works such as the religious "Weihnachtstempel", which she made in 1918. 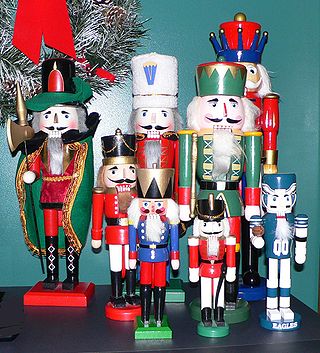 Nutcracker dolls, also known as Christmas nutcrackers, are decorative nutcracker figurines most commonly made to resemble a toy soldier. In German tradition, the dolls are symbols of good luck, frightening away malevolent spirits. While nearly all nutcrackers from before the first half of the 20th century are functional, a significant proportion of modern nutcrackers are primarily decorative, and not able to crack nuts. Nutcrackers are also a part of German folklore, serving as protectors of a house.

Christmas angels are small wooden figures portraying angels often playing an instrument. They can be arranged to an entire orchestra. The origins of artistic angel carving lie in the Ore Mountains where the angels are an integral part of Ore Mountain folk art.

Wikimedia Commons has media related to Schwibbogen .
This page is based on this Wikipedia article
Text is available under the CC BY-SA 4.0 license; additional terms may apply.
Images, videos and audio are available under their respective licenses.