Sciacca (Italian:  [ˈʃakka] ; Greek: Θέρμαι; Latin: Thermae Selinuntinae, Thermae Selinuntiae, Thermae, Aquae Labrodes and Aquae Labodes), is a town and comune in the province of Agrigento on the southwestern coast of Sicily, southern Italy. It has views of the Mediterranean Sea.

Thermae was founded in the 5th century BC by the Greeks, as its name imports, as a thermal spa for Selinunte, whose citizens came there to bathe in the sulphurous springs of Mount San Calogero, which rises up behind the town. We have no account of the existence of a town on the site during the period of the independence of Selinunte, though there is little doubt that the thermal waters would always have attracted some population to the spot. Nor even under the Romans did the place attain to anything like the same importance with the northern Thermae; and there is little doubt that Pliny is mistaken in assigning the rank of a colonia to the southern instead of the northern town of the name. Strabo mentions the waters (τὰ ὕδατα τὰ Σελινούντια [3] ); and they are again noticed in the Itineraries under the name of Aquae Labodes or Labrodes. [4]

The origins of the town's name have been much debated, with Latin "ex acqua", as a reference to the springs of thermal water of the area, or Arabic "Syac", meaning bath, and al Saqquah, dating back to the cult of the Syrian god "Shai al Quaaum", as possibilities.

The city walls, the bastions and the Old Castle owe their existence to Roger the Great Count.

A royal city which had remained faithful to Manfred of Sicily during the Angevine invasion, by 1268 A.D. it was besieged by Charles I of Anjou and surrendered the following year. After the Sicilian Vespers, it established itself as a free commune. During the Aragonese-Angevine wars it was besieged numerous times, after which the Peralta family took possession of it and obtained by the king of Sicily the right to mint coins. In the following centuries the town was at the center of bloody feuds between rival baronial families (the Luna, of Aragonese origin, and the Perollo, of Norman stock), which nearly halved its population. In 1647 the impoverished town was the seat of an anti-Spanish rebellion.

During World War II the Italian Regia Aeronautica (Royal Air Force) had a base near Sciacca.

Sciacca still retains much of its medieval layout, which divided the town into quarters, each laid out on a strip of rock descending toward the sea. Sciacca has several points of interest, including:

Sciacca's festivals include the Carnival, celebrated during the week before the beginning of Lent (February). The highlight of the festival is the parade of bizarre figures mounted on floats, famous throughout Sicily for their gaudy expressions. Sciacca is also the hometown of the Mediterranean Scene.

Starting near the turn of the 20th century, a number of residents of the Sciacca area emigrated to the North End of Boston, Mass., where, starting in 1910, around August 15, their descendants, especially those from fishing families, have celebrated the Festival of the Madonna del Soccorso .

The economy of Sciacca is mainly based on agriculture, fishing and related food processing industry and tourism. 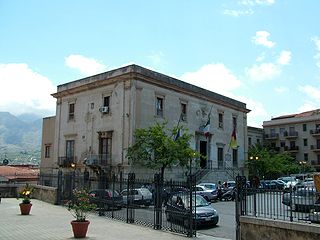 Termini Imerese is a town and comune in the Metropolitan City of Palermo on the northern coast of Sicily, southern Italy. 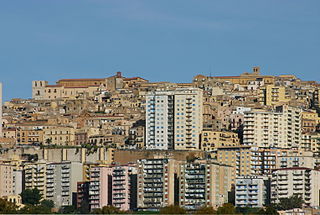 Agrigento is a city on the southern coast of Sicily, Italy and capital of the province of Agrigento. It was one of the leading cities of Magna Graecia during the golden age of Ancient Greece with population estimates in the range of 200,000 to 800,000 before 406 BC.

Licata, formerly also Alicata, is a city and comune located on the south coast of Sicily, at the mouth of the Salso River, about midway between Agrigento and Gela. It is a major seaport developed at the turn of the twentieth century, shipping sulphur, the refining of which has made Licata the largest European exporting centre, and asphalt, and at times shipping cheese. 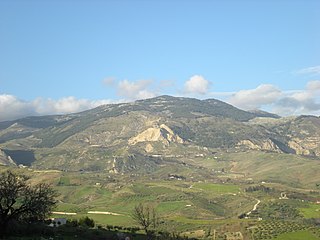 The Province of Agrigento is a province in the autonomous island region of Sicily in Italy, situated on its south-western coast. Following the suppression of the Sicilian provinces, it was replaced in 2015 by the Free municipal consortium of Agrigento. It has an area of 3,041.90 square kilometres (1,174.48 sq mi), and a total population of 474,493. There are 43 comunes in the province. 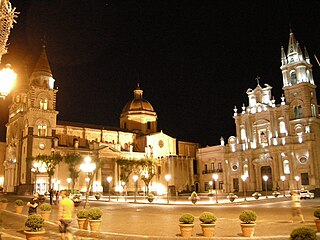 Acireale is a coastal city and comune in the north-east of the Metropolitan City of Catania, Sicily, southern Italy, at the foot of Mount Etna, on the coast facing the Ionian Sea. It is home to numerous churches, including the Neo-Gothic St. Peter's Basilica, St. Sebastian's Basilica in the Sicilian Baroque style, and the 17th century Acireale Cathedral, and a seminary, for the training of priests. Acireale is also noted for its art and paintings: the oldest academy in Sicily, the "Accademia dei Dafnici e degli Zelanti", is located here.

The Music of Sicily refers to music created by peoples from the isle of Sicily. It was shaped by the island's history, from the island's great presence as part of Magna Grecia 2,500 years ago, through various historical incarnations as a part of the Roman Empire, then an integral part of the Kingdom of Sicily, and, finally, as an autonomous region of the modern nation state of Italy.

Alvito is a town and comune in central Italy, in the province of Frosinone, south of Rome in the Lazio region. Its territory is included in the Abruzzo, Lazio and Molise National Park. 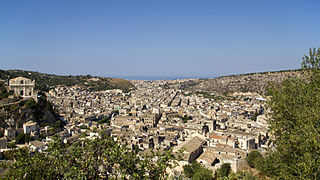 Scicli is a town and municipality in the Province of Ragusa in the south east of Sicily, southern Italy. It is 25 kilometres (16 mi) from Ragusa, and 308 kilometres (191 mi) from Palermo, and has a population (2017) of 27,051. Alongside seven other cities in the Val di Noto, it has been listed as one of UNESCO's World Heritage Sites. 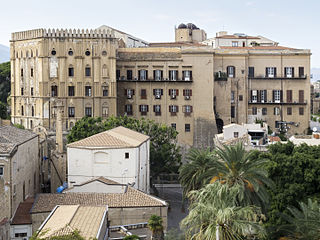 The Palazzo dei Normanni or Royal Palace of Palermo is a palace in Palermo, Italy. It was the seat of the Kings of Sicily during the Norman domination and served afterwards as the main seat of power for the subsequent rulers of Sicily. Since 1946 it has been the seat of the Sicilian Regional Assembly. The building is the oldest royal residence in Europe; and was the private residence of the rulers of the Kingdom of Sicily and the imperial seat of Frederick II and Conrad IV. 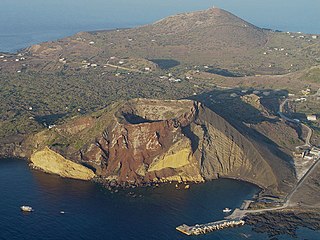 Linosa is one of the Pelagie Islands in the Sicily Channel of the Mediterranean Sea.

Serradifalco is a town and comune in the province of Caltanissetta, Sicily, Italy. 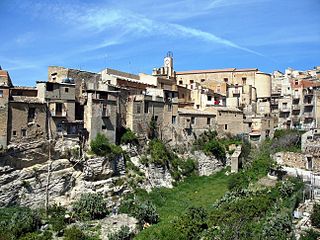 Burgio is a comune (municipality) in the Province of Agrigento in the Italian region Sicily, located about 60 kilometres (37 mi) south of Palermo and about 40 kilometres (25 mi) northwest of Agrigento. 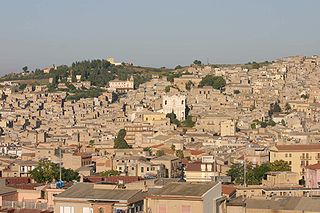 Canicattì is a town and comune (municipality) in the Province of Agrigento in the Italian region Sicily, located about 90 kilometres (56 mi) southeast of Palermo and about 34 kilometres (21 mi) east of Agrigento. In 2016, it had a population of 35,698. 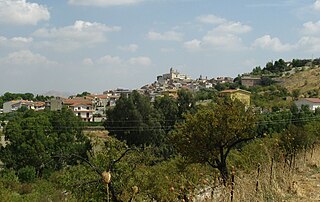 Comitini is a comune (municipality) in the Province of Agrigento in the Italian region Sicily, located about 80 kilometres (50 mi) southeast of Palermo and about 13 kilometres (8 mi) northeast of Agrigento. The town is located on a hilly area, 346 metres (1,135 ft) above sea level. 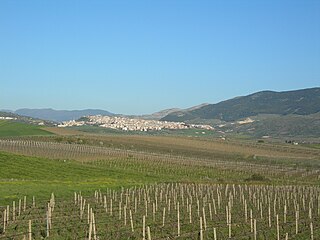 Sambuca di Sicilia is a comune (municipality) in the Province of Agrigento in the Italian region Sicily, located about 68 kilometres (42 mi) southwest of Palermo and about 89 kilometres (55 mi) northwest of Agrigento. 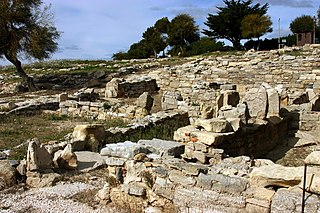 Heraclea Minoa was an ancient Greek city situated on the southern coast of Sicily near the mouth of the river Halycus, 25 km west of Agrigentum. It is located near the modern town of the same name in the comune Cattolica Eraclea in Italy. 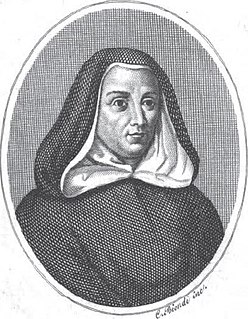 Tommaso Fazello was an Italian Dominican friar, historian and antiquarian. He is known as the father of Sicilian history. He is the author of the first printed history of Sicily: De Rebus Siculis Decades Duae, published in Palermo in 1558 in Latin. He was born in Sciacca, Sicily and died in Palermo, Sicily. 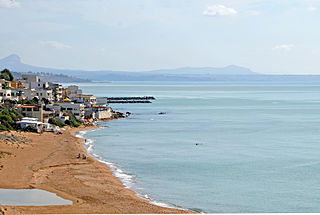 Marinella di Selinunte, also known as Marinella, is a southern Italian village and hamlet (frazione) of Castelvetrano, a municipality in the Province of Trapani, Sicily. It is located close to the Ancient Greek city of Selinunte and, in 2011, it had a population of 1,499.