Scituate was first settled in 1710 by emigrants from Scituate, Massachusetts. The original spelling of the town's name was "Satuit", a native Indian word meaning "cold brook" or "cold river." The town was a part of Providence until 1731.

Scituate's first town meeting was held at the Angell Tavern in South Scituate, with Stephen Hopkins elected as the first moderator and Joseph Brown as clerk. Stephen Hopkins later became a governor of Rhode Island and was a signer of the Declaration of Independence. His brother, Esek Hopkins, was Commander in Chief of the Continental Navy beginning in 1776. In 1788 Scituate representative, militia general and Supreme Court Justice William West led an armed anti-federalist mob of farmers into Providence to protest the U.S. Constitution. [4] In 1791 the U.S. Supreme Court decided its first case, West v. Barnes , regarding a farm in Scituate.

Scituate was once made up of a multitude of small villages, including North Scituate, Hope, Ashland, Clayville, Elmdale, Fiskeville, Glenn Rock, Harrisdale, Jackson, Kent, Ponaganset, Potterville, Richmond, Rockland, Saundersville, and South Scituate. Foster was incorporated as a separate town in 1781, taking the western half of Scituate.

Scituate has played an important role in many of the United States wars. During the Revolutionary War, 76 cannons were forged at the Hope Furnace in the village of Hope in southern Scituate. During World War II, a Federal Communications Commission Radio Intelligence Division monitoring facility on Darby Road near Chopmist Hill ( 41°49′11″N71°38′43″W﻿ / ﻿41.8198°N 71.6453°W﻿ / 41.8198; -71.6453 ) intercepted German HF communications. Because of this, in 1946, the Chopmist Hill area was considered as a candidate for the location of the headquarters of the United Nations. [5] [6]

One of the most prominent features of the town is the Scituate Reservoir. The large reservoir spans a large portion of Scituate and has forever changed the face of the town. During construction of the reservoir, numerous villages were flooded along the former banks of the Pawtuxet River. Some foundations of the old structures are still visible today during times of drought. The reservoir, and a large portion of land surrounding, it is owned and maintained by the Providence Water Supply Board.

The main Scituate reservoir was formed by the construction of a dam across the Pawtuxet River at the former village of Kent. The dam, principally of earth, is about 3,200 feet (980 m) long and 100 feet (30 m) high. Water storage in the reservoir began on November 10, 1925. An aqueduct from the dam feeds the nearby treatment plant which was placed in operation on September 30, 1926.

The Scituate Reservoir is the largest artificial freshwater body of water in the state of Rhode Island.[ citation needed ] It has an aggregate capacity of 39 billion US gallons (150×10^6 m3) and a surface area of 5.3 square miles (14 square kilometers). It and its six tributary reservoirs—which make up a total surface area of 7.2 sq mi (19 km2)—supply drinking water to more than 60 percent of the state population. The surrounding drainage basin that provides water to the reservoir system covers an area of about 94 sq mi (240 km2), which includes most of the town of Scituate and parts of Foster, Glocester, Johnston, and Cranston. The Scituate Reservoir is operated by Providence Water Supply Board.

The original treatment plant was state-of-the-art at the time of its construction. The plant was considered to be among the most technologically advanced of its day, and for many years the filtration system was the only plant of its type in New England. As demand continued to grow, the treatment plant underwent major expansions and renovations in the 1940s and again in the 60s. Today, the plant has a maximum treatment capacity of 144 million US gallons (550,000 m3) of water per day and still remains the largest treatment facility in New England. [7]

In the 2016 Presidential election, Donald Trump won 60.2% of the vote in Scituate. Opponent Hillary Clinton received 34.8% of the town vote. [9]

There were 3,780 households, out of which 36.2% had children under the age of 18 living with them, 67.3% were married couples living together, 7.5% had a female householder with no husband present, and 22.5% were non-families. 18.5% of all households were made up of individuals, and 7.7% had someone living alone who was 65 years of age or older. The average household size was 2.72 and the average family size was 3.12.

In 1839, the Smithville Seminary, a Freewill Baptist institution was founded in North Scituate and existed on and off as an educational institution until it finally closed in 1876. The Pentecostal Collegiate Institute then moved to the former campus from Saratoga Springs, New York in 1902. When PCI became Eastern Nazarene College and left in 1919, William Holland purchased the property and moved his Watchman Industrial School and Camp there in 1923. It was allegedly burned several times by the local Ku Klux Klan in the 1920s and 1930s [13] and closed in 1938, although the summer camp operated until 1974. The Greek Revival buildings and campus are now the Scituate Commons, an apartment complex on Institute Lane.

The Scituate Art Festival, [14] held every Columbus Day weekend since 1967, features over 300 artists and craftspeople displaying and selling their artwork in the picturesque New England village. Visitors number in the 200,000 to 350,000 range per festival. The Old Congregational Church grounds are used for part of the festival. 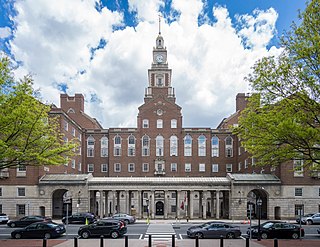 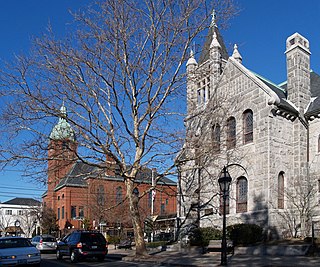 Warren is a town in Bristol County, Rhode Island, United States. The population was 10,611 at the 2010 census. 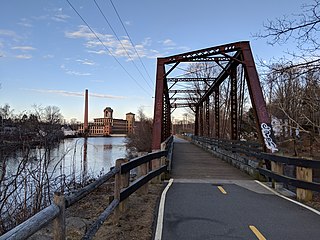 Coventry is a town in Kent County, Rhode Island, United States. The population was 35,014 at the 2010 census. 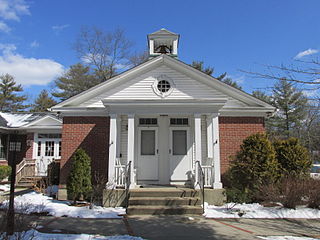 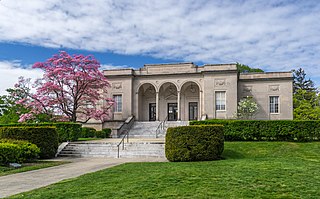 Cranston, once known as Pawtuxet, is a city in Providence County, Rhode Island, United States. The official population of the city is 80,559, making it the second largest in the state. The center of population of Rhode Island is located in Cranston. Cranston is a part of the Providence metropolitan area. 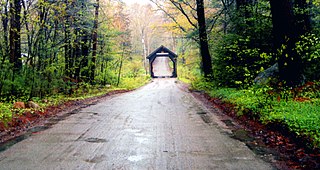 Foster is a town in Providence County, Rhode Island, in the United States. The population was 4,606 at the 2010 census. 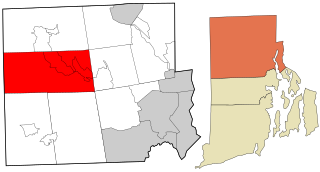 Glocester is a town in Providence County, Rhode Island, United States. The population was 9,934 as of the 2010 census. The villages of Chepachet and Harmony are in Glocester. Putnam Pike runs through the town center of Glocester into Putnam, Connecticut. 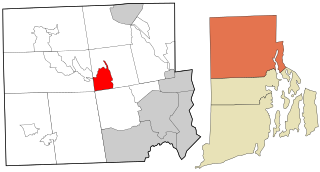 Greenville is a village and census-designated place (CDP) in the town of Smithfield in Providence County, Rhode Island, United States. The population was 8,658 at the 2010 census. The CDP is centered on the village of Greenville but also encompasses the nearby villages of West Greenville and Spragueville, as well as the Mountaindale Reservoir and beach.

Exeter is a town in Washington County, Rhode Island, United States. Exeter extends east from the Connecticut border to the town of North Kingstown. It is bordered to the north by West Greenwich and East Greenwich, and to the south by Hopkinton, Richmond, and South Kingstown. Exeter's postal code is 02822, although small parts of the town have the mailing address West Kingston (02892) or Saunderstown (02874). The population was 6,425 at the 2010 census. 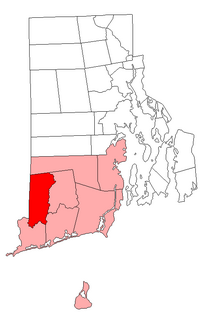 Hopkinton is a town in Washington County, Rhode Island. The population was 8,188 at the 2010 census. Narragansett is a town in Washington County, Rhode Island, United States. The population was 15,868 at the 2010 census. However, during the summer months the town's population more than doubles to near 34,000. The town is colloquially known as "Gansett". The town of Narragansett occupies a narrow strip of land running along the eastern bank of the Pettaquamscutt River to the shore of Narragansett Bay. It was separated from South Kingstown in 1888 and incorporated as a town in 1901. 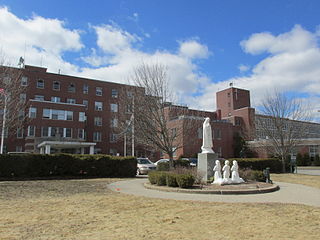 North Providence is a town in Providence County, Rhode Island, United States. The population was 32,078 at the 2010 census.

Greene is an unincorporated village and census-designated place in the western part of the town of Coventry, Rhode Island, United States. As of the 2010 census it had a population of 888. It is 2 miles (3 km) east of the Connecticut border and the same distance north of West Greenwich. The name derives from Nathanael Greene, a Rhode Island-born general in the American Revolution. 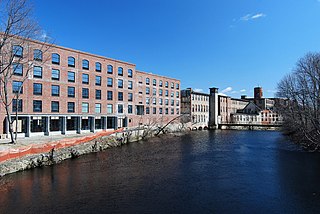 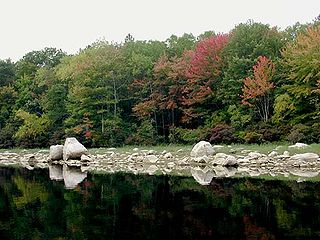 The Ponaganset River is a river in the U.S. state of Rhode Island. It flows approximately 12.5 miles (20.1 km). There are three dams along the river's length.

The Moswansicut River is a river in the U.S. state of Rhode Island. It flows approximately 6.2 miles (10.0 km), including its portion within the Scituate Reservoir. There are two dams along the river's length. 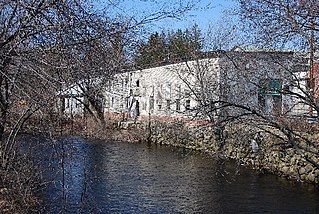 The North Branch Pawtuxet River is a river in the U.S. state of Rhode Island. It flows approximately 8.9 miles (14.3 km). There are 9 dams along the river's length. 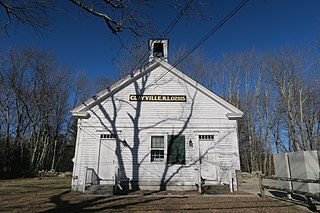 Clayville is a census-designated place in the towns of Foster and Scituate in Providence County, Rhode Island, United States. As of the 2010 census, it had a population of 300. It is the location of the Clayville Historic District.