Last updated February 01, 2021
American actor, musician and baseball player
This article is about the actor. For other people, see Scott Patterson (disambiguation).

Scott Gordon Patterson (born September 11, 1958) is an American actor and musician. He is known for his role as Luke Danes in Gilmore Girls and as Special Agent Peter Strahm in the Saw films. He also starred as Michael Buchanan in the NBC drama series The Event and as a Tenctonese alien commander in the TV film Alien Nation: Dark Horizon .

Patterson was born September 11, 1958, in Philadelphia, Pennsylvania, the son of Hope Gordon (1928–2008), a homemaker, journalist, and actress in the Haddonfield Plays and Players Theatre Troupe, and Francis Ford Patterson IV (1925–2013), an advertising executive. [2] His parents divorced in 1974.

Patterson formed The Unknowns, his first band, in the third grade with longtime friend Tommy Poitras. They played just two songs – Back in the U.S.S.R. and (I'm Not Your) Steppin' Stone . The Unknowns added to their set list and performed throughout grade school and high school but disbanded after high school graduation. [3] [4] [5]

Patterson was raised in Haddonfield, New Jersey and attended Haddonfield Memorial High School, graduating in 1976. [6] He attended Rutgers University, pursuing a degree in Comparative Literature. He studied acting in New York with renowned coaches Robert Lewis and Sondra Lee. He was exposed to the teachings of Paul Newman, Arthur Penn, and Frank Corsaro at the Actors Studio, where he also participated in the Producer's Unit chaired by Penn. He appeared in numerous productions, including Rasputin and Miss Julie.

Patterson spent seven years, from 1980 to 1986, as a professional pitcher in minor league baseball, topping out at the Triple-A level, the highest before the major leagues. He played in two major league farm systems for seven different minor league teams and was selected to four all-star teams (two with Atlanta and two with the New York Yankees). Patterson was initially selected by the Atlanta Braves in the first round (12th overall) of the 1980 Major League Baseball secondary draft (an event distinct from the amateur draft). [7] He played his first pro season with their Class A Anderson Braves in 1980. In 1981 Patterson won 13 consecutive games as a starting pitcher between Class A Durham and Double-A Savannah to set a Braves record for most consecutive wins to start a season. He was named the Braves Minor League Pitcher of the Month twice.

Patterson was traded from the Braves to the New York Yankees for Bob Watson on April 23, 1982, [8] and was placed on the Yankees Major League roster in 1983. Patterson was named as an All-Star both with the Yankees' Double-A Albany-Colonie Yankees and Triple-A Columbus Clippers in 1986. [9] In 1985 he was selected by the Texas Rangers in the Rule 5 draft but subsequently returned to the Yankees. [10] While in the Yankees organization Patterson was named their minor league Pitcher of the Month once, and Pitcher of the Week three times. Patterson also pitched in the Puerto Rican Winter League with the Lobos de Arecibo in 1984–85, and the Dominican Professional Baseball League with Santo Domingo in 1985–86. Patterson signed a minor league contract with the Los Angeles Dodgers affiliate, the Albuquerque Dukes, in late 1986 [11] but never played at the major league level.

In 1988, Patterson formed the Arclight Theatre Company in Soho, NYC with John Bishop. Patterson played Jedediah Kohler in Bishop's The Great, Great Grandson of Jedediah Kohler in the Company's debut production. One night, George Wolfe was in the audience and offered Gordon-Patterson a role in the European Traveling Company's Tamara but he turned it down to continue work with Arclight.

In 1993, Patterson was slated to play the lead in Castle Rock's Little Big League opposite Sela Ward. The producers recast the role at the last minute with Revenge of the Nerds star Timothy Busfield, opting to offer Patterson the role of Mike McGrevey.

Patterson completed filming the leading role in the feature film Her Best Move, directed by Norm Hunter and co-starring Lisa Darr. He also appeared on the big screen in Little Big League , with Jason Robards, and in Three Wishes, with Patrick Swayze and Mary Elizabeth Mastrantonio. He also starred in the independent films Highway 395 and Rhapsody in Bloom with Penelope Ann Miller and Ron Silver, Boys of Abu Ghraib with Sean Astin, and Other People's Children with Diane Marshall-Grant.

On television, he has landed romantic roles; his most notable role, which he played for seven years on the television show Gilmore Girls , is Luke Danes, the on-again, off-again love interest of the show's protagonist, Lorelai Gilmore, played by Lauren Graham.

On Seinfeld , Patterson was deemed "spongeworthy" by Elaine (Julia Louis-Dreyfus). He had a profound effect on Grace (Debra Messing) in the "Das Boob" episode of Will & Grace , and he played the love interests of Jennifer Grey in It's Like, You Know and Sharon Lawrence's character in Fired Up . He has also guest starred on Arli$$ and Get Real .

Among Patterson's recent projects are a co-starring role on Aliens in America and voicing the character of King Faraday in the 2004 animated series Justice League Unlimited , from Warner Bros. Animation. [12] He has also starred as Agent Strahm in two iterations of the Saw franchise, Saw IV and Saw V , also appearing through flashback sequences in Saw VI.

Patterson appeared in some episodes of the second season of 90210 as Liam Court's ex-con father who has recently been released from prison and wants to reconnect with his son.

Patterson starred as Michael Buchanan in the NBC drama series The Event , which premiered on September 20, 2010. His character was killed off in episode 18. [13] [14]

In 2016, Patterson reprised his role as Luke Danes for the revival miniseries Gilmore Girls: A Year in the Life , which streamed on Netflix on November 25, 2016. [15] 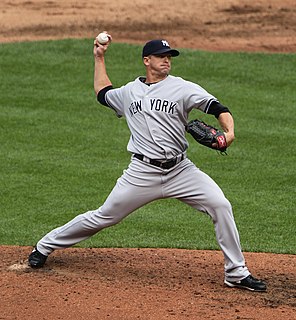 Scott Christopher Proctor is an American former professional baseball pitcher. He played in Major League Baseball (MLB) between 2004 and 2011 for the New York Yankees, Los Angeles Dodgers, and Atlanta Braves. In 2012, he played for the Doosan Bears of the KBO League.

The following are the baseball events of the year 1978 throughout the world.

Kenneth Earl Smith is a former major league baseball player who served as a reserve first baseman for the Atlanta Braves between 1981 and 1983.

The New York Yankees' 1999 season was the 97th season for the Bronx-based professional baseball team. The team finished with a record of 98–64 finishing 4 games ahead of the Boston Red Sox. New York was managed by Joe Torre. The Yankees played at Yankee Stadium. In the playoffs, they got to the World Series and defeated the Atlanta Braves in 4 games to win their 25th World Series title. In that year, FTA broadcasts returned to where they all started in 1947—Fox-owned WNYW, the network's flagship channel, while cable broadcasts continued on MSG.

Ramiro Peña Gauna is a Mexican professional baseball infielder for the Sultanes de Monterrey in the Mexican Baseball League. He is also signed to the Tomateros de Culiacán of the Mexican Pacific League, where he plays during the winter. He previously played in Major League Baseball (MLB) for the New York Yankees, Atlanta Braves, and San Francisco Giants. 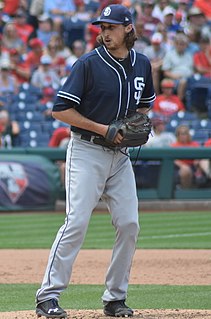 Matthew Scott Strahm is an American professional baseball pitcher for the San Diego Padres of Major League Baseball (MLB). He made his MLB debut for the Kansas City Royals in 2016. In 2019, he was the only MLB player born in North Dakota.