Sea Pigeon (1970–2000) was an American-bred, British-trained racehorse who excelled in both National Hunt and flat racing. In a racing career which lasted from 1972 until 1981 he competed in eighty-five races, and won thirty-seven times. He was best known for his performances in hurdle races when he won the Champion Hurdle on two occasions. He was also one of the best flat stayers of his era winning major handicap races under weights of up to 140 pounds. As a gelding, he was ineligible to compete in the most prestigious flat staying races, such as the Ascot Gold Cup. On his retirement he was described as Britain's "best known horse after Arkle and Red Rum. [1]

Sea Pigeon was a dark-brown horse bred by his owner, Jock Whitney at the Greentree Stud in the United States. [2] He was sired by the great Derby winner Sea Bird. Sea Pigeon's dam, Around the Roses, ran second in the Acorn Stakes and went on to produce the American turf champion Bowl Game. [3] As a yearling Sea Pigeon was sent into training with Jeremy Tree in England. [4]

Sea Pigeon won once as a two-year-old in October 1972, when he was ridden to victory by Lester Piggott in the Duke of Edinburgh Stakes at Ascot. [5] In early 1973, he was considered a serious contender for the Classics. [6] He ran in the 1973 Epsom Derby and finished seventh behind Morston. [4] By the end of 1973, Sea Pigeon's indifferent form led to him being thought "ungenuine, highly-strung and difficult to handle." [5] He was subsequently gelded and was sold for £8,000 to Pat Muldoon, who sent the horse to National Hunt trainer Gordon W. Richards. [2]

After showing modest form on the flat in 1974, Sea Pigeon was switched to hurdles. In his first two seasons as a hurdler, he showed steadily improving form, winning several races and finishing placed behind notable hurdlers including Lanzarote and Birds Nest. In late 1976, after a defeat at Kempton, Sea Pigeon joined Peter (M.H.) Easterby's stable at Habton Grange near Malton, North Yorkshire. In the second half of the 1976–77 National Hunt season, he became a top-class performer in hurdle races, finishing fourth to his stable companion Night Nurse in the Champion Hurdle and winning the Scottish Champion Hurdle at Ayr.

His flat career also started to blossom with a succession of wins in top handicaps - he won the Chester Cup in 1977 and 1978, and the Ebor Handicap carrying 10 stone, which is still a record, in 1979. Sea Pigeon was ridden to his Ebor win by his regular hurdles partner Jonjo O'Neill – due to the long ITV strike of that year, only those who were present at York that day saw it.

Having contracted a virus, shortly before the 1981 Aintree Festival, Sea Pigeon never recovered fully and ran poorly in two races in the autumn of 1981. He was retired just before the 1982 Cheltenham Festival. He had won 21 races from 40 starts over jumps and 16 races from 45 starts on the flat. [1]

During his retirement Sea Pigeon was housed with trainer Pat Rohan for some time and could often be seen having a stroll round the streets of Norton much to the joy of the locals. Later he spent twelve years under the care of Polly Teirney/Perkins at her yard in Sherriff Hutton, near Malton.

Even when Jonjo O'Neill turned his hand to training across the Pennines in Skelton, his bond with Sea Pigeon was far from over. The former jockey would often turn up unannounced just to spend some time with his old friend. This bond continued until Sea Pigeon was found to have irreparable damage to one of his pedal bones and was put to sleep on Tuesday 20 October 2000. He was buried at Easterby's Habton Grange stable, next to his stable companion and racecourse rival Night Nurse. [8]

In their book A Century of Champions, John Randal and Tony Morris ranked Sea Pigeon the tenth best British or Irish hurdler of the 20th century. [11] 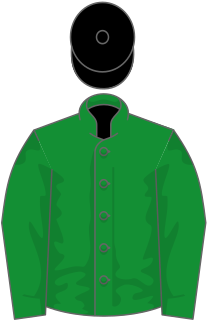 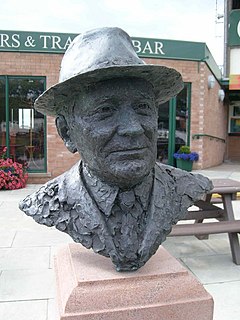 Monksfield (1972–1989) was an entire horse Irish-trained National Hunt racehorse who won the Champion Hurdle in 1978 and 1979. He also won the Aintree Hurdle at Aintree Racecourse three times - including a dead-heat with Night Nurse, one of his two greatest rivals. 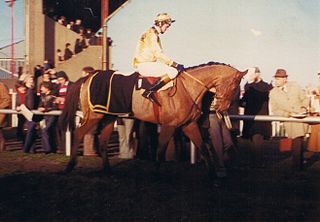 Golden Cygnet was a racehorse who was described in the 1979 Irish Racing Annual by legendary Irish trainer Vincent O'Brien as "the best hurdler I've ever seen." His hurdling career lasted less than 5 months, as a result of the fatal injury he sustained in the 1978 Scottish Champion Hurdle.

Rhinestone Cowboy is an Irish bred racehorse. He was trained in England by Jonjo O'Neill. In a career which lasted from 2002 until 2007 he ran seventeen times and won ten races including two Grade I hurdle races.

Collier Bay was a British Thoroughbred racehorse. He was a moderate performer on the flat, winning one minor race from fourteen attempts. He showed considerable improvement when switched to hurdling winning several important races including the Irish Champion Hurdle at Leopardstown and the Champion Hurdle at Cheltenham. He later had some success as a steeplechaser, but was increasingly affected by respiratory problems and was retired from racing in 2001.

Master Oats was a British Thoroughbred racehorse. A specialist steeplechaser, he ran twenty-one time and won ten races. He campaigned mainly at distances in excess of three miles and was particularly effective on soft or heavy ground. Over a period of sixteen months between November 1993 and March 1995 Master Oats won nine of his eleven races and improved from racing in minor handicaps to become the highest-rated staying chaser in Britain. His winning run culminated in a win in the 1995 Cheltenham Gold Cup. He also ran in three editions of the Grand National, twice carrying top weight. His later career was disrupted by injury and he failed to win again after his Gold Cup success. Master Oats was retired from racing in 1998 and died in 2012.

National Spirit was a British National Hunt horse best known for winning the Champion Hurdle twice, as well as the Rank Challenge Cup at Fontwell three times. He was one of the best hurdlers in the post-war era, and was also an excellent dual-purpose horse, winning several major races on the Flat. Along with Irish hurdler Hatton's Grace, National Spirit was one of the most popular horses of his time 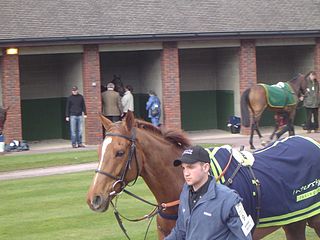 Lochnager was a British Thoroughbred racehorse and sire. A specialist sprinter, he raced mainly in the North of England winning nine of his sixteen starts and was regarded as the best horse in Europe over sprint distances in 1976. He won one minor race as a two-year-old but made relentless progress when campaigned in handicap races in 1975, winning several valuable events. He emerged as a top-class performer as a four-year-old, establishing himself as the year's best sprinter with a run of four successive wins in the Temple Stakes, King's Stand Stakes, July Cup and William Hill Sprint Championship. He made little impact at stud, but was the damsire of Lochsong.