The company was founded in 1962 and operated under the name Nippon Keibi Hosho until 1983. [3] It initially offered security services such as patrolling services and static guard services. [4]

In 1966, the company developed Japan’s first on-line security system. In 1983, Nippon Keibi Hosho adapted the name Secom, which was originally used only as a brand name of the company. The Secom name "was coined as a contraction of 'security' and 'communication', the concept of this brand was to build 'a new security system collaborating people and science'”. [4]

Panasonic Corporation, formerly known as the Matsushita Electric Industrial Co., Ltd., founded by Kōnosuke Matsushita in 1918 as a lightbulb socket manufacturer, is a major Japanese multinational electronics company, headquartered in Kadoma, Osaka. In addition to consumer electronics of which it was the world's largest maker in the late 20th century, Panasonic offers a wide range of products and services, including rechargeable batteries, automotive and avionic systems, industrial systems, as well as home renovation and construction.

The Victor Company of Japan, Ltd., usually referred to as JVC or the Japan Victor Company, was a Japanese international professional and consumer electronics corporation based in Yokohama. Founded in 1927, the company is best known for introducing Japan's first televisions and for developing the Video Home System (VHS) video recorder. 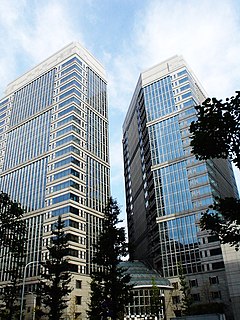 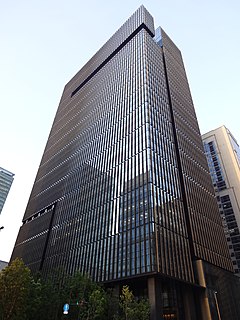 Mizuho Financial Group, Inc., abbreviated as MHFG, or simply called Mizuho, is a banking holding company headquartered in the Ōtemachi district of Chiyoda, Tokyo, Japan. The name "mizuho (瑞穂)" literally means "abundant rice" in Japanese and "harvest" in the figurative sense. Upon its founding, it was the largest bank in the world by assets. It is considered a G-SIB by the Financial Stability Board.

Knorr is a German food and beverage brand. It has been owned by Unilever since 2000, when Unilever acquired Best Foods, excluding Japan, where it is made under licence by Ajinomoto. It produces dehydrated soup and meal mixes, bouillon cubes and condiments.

Wyndham Hotels & Resorts, Inc. is a hotel company based in Parsippany, New Jersey, United States. It describes itself as the largest hotel franchisor in the world, with 9,280 locations. It has a portfolio of 20 hotel brands, including Baymont, Days Inn, Howard Johnson, La Quinta, Ramada, Super 8, Travelodge, and Wyndham.

Nippon Columbia Co., Ltd., often pronounced Korombia, operating internationally as Nipponophone Co., Ltd., is a Japanese record label founded in 1910 as Nipponophone Co., Ltd. It affiliated itself with the Columbia Graphophone Company of the United Kingdom and adopted the standard UK Columbia trademarks in 1931. The company changed its name to Nippon Columbia Co., Ltd. in 1946. It used the Nippon Columbia name until October 1, 2002, when it became Columbia Music Entertainment, Inc.. On October 1, 2010, the company returned to its current name. Outside Japan, the company operated formerly as the Savoy Label Group, which releases recordings on the SLG, Savoy Jazz, and continues to operate as Denon. It also manufactured electronic products under the Denon brand name until 2001. In 2017, Concord Music acquired Savoy Label Group. Nippon Columbia also licensed Hanna-Barbera properties in Japan until those rights were transferred to Turner Japan sometime in 1997. Currently, these rights are owned by Warner Bros. Japan LLC 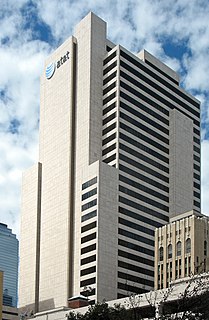 AT&T Inc. is an American multinational conglomerate holding company, Delaware-registered but headquartered at Whitacre Tower in Downtown Dallas, Texas. It is the world’s largest telecommunications company, and the second largest provider of mobile telephone services. Since June 14, 2018, it is also the parent company of mass media conglomerate WarnerMedia, making it one of the world's largest media and entertainment company in terms of revenue. As of 2020, AT&T was ranked 9th on the Fortune 500 rankings of the largest United States corporations, with revenues of $181 billion. 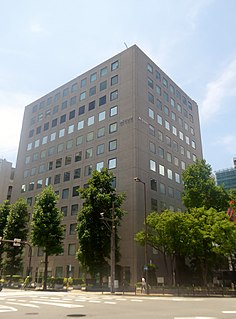 Onkyo Corporation is a Japanese consumer electronics manufacturer, specializing in premium home cinema and audio equipment, including AV receivers, surround sound speakers and portable devices. The word Onkyo translates as "sound resonance". On (音) is from Chinese pronunciation, with traditional Japanese pronunciation as Oto, meaning "the sound". Kyo (響) is also from Chinese pronunciation, pronounced as Hibiki (noun) or Hibiku (verb) in traditional Japanese, meaning "resound, sound, or echo". The company started under the name of Osaka Denki Onkyo K.K in 1946. The current Onkyo Corporation umbrella includes the Integra and Integra Research divisions as well as the main Onkyo brand. 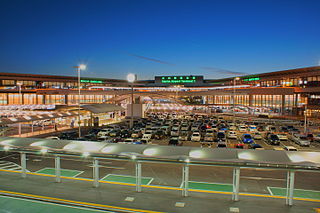 TVGuide.co.uk is a British television listings website. It is not connected in any way with the U.S.-based TV Guide magazine.