The Mexican Secretariat of Public Security or Secretariat of Public Safety, also known as Ministry of Public Security and Ministry of Public Safety (Spanish : Secretaría de Seguridad Pública, SSP), was the federal ministry of the Mexican Executive Cabinet [2] that aimed to preserve freedom, order, and public peace and safeguard the integrity and rights of the people. The Assistant Attorney General uses the Powers of the Union to prevent the commission of crimes, develop public security policies of the Federal Executive, propose policies on crime, administer the federal prison system, and administer justice to juvenile offenders based on the Organic Law of the Federal Public Administration [2] and other federal laws, regulations, decrees, agreements, and orders of the President of the Republic. It had its headquarters in Álvaro Obregón, Mexico City. [3]

President Enrique Peña Nieto announced on November 15, 2012, that he will eliminate the Secretariat of Public Security, as part of his planned administrative reforms, after he takes office. [4] It was dissolved on January 3, 2013, and was replaced by the "National Security Commission" (Spanish : Comision Nacional de Seguridad), an internal organ of the Secretariat of the Interior [5] as seen on its website. [6]

The Secretariat will plan and conduct their activities in accordance with the objectives, strategies and priorities, National Development Plans and the National Program are issued by the Head of the Federal Executive. According to Organic Law of the Federal Civil Service [7] in its 'Article 30a' has an office on the following main functions, to develop security policies and propose public policy on crime at the federal level, including the rules, instruments and actions to effectively prevent the commission of crimes, to propose Federal Executive measures to ensure consistency of policy between the criminal divisions of the federal public service, chairing the National Council for Public Security, at the Council of National Security, policies, actions and strategies of coordination in the field of crime prevention and criminal justice policy for the entire national territory, dealing expeditiously with complaints and citizens' complaints regarding the exercise of its powers, organize, manage, administer and monitor the PFP and to ensure the honest performance of their staff and implement its disciplinary system, safeguard the integrity and heritage of the people, prevent the commission of federal crimes, and to preserve the Freedom, order and public peace, establish a system to collect, analyze, examine and process information for the prevention of crime, using methods that ensure strict adherence to human rights and run the penalties for federal crimes and to administer the federal prison system, as well as organize and conduct activities to support the released.

For the study, planning, and dispatching of the matters within its competence, the Secretariat will be composed of the following administrative units and bodies:

The Policía de Seguridad Aeroportuaria is an Argentine law enforcement agency created to protect and guard national public airports. It was the first federally owned police institution, managed by civilians, to be created after Argentina's return to democracy in 1983. 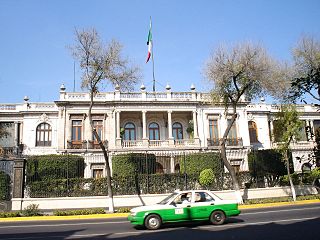 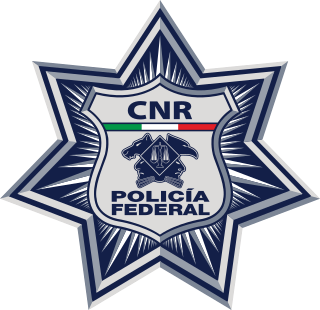 The Federal Police, formerly known as the Policía Federal Preventiva, was a Mexican national police force. It was under the authority of the Department of Security and Civil Protection. They were sometimes referred to by the slang term "Federales" or "Mexican feds" by some U.S. agents and media. Typically, agents of the Federal Police are heavily armed and wear dark blue, black, or gray combat fatigues. The Federal Police was officially dissolved and absorbed to the National Guard, a new national police institution created by president Andres Manuel Lopez Obrador, on 1 October 2019. 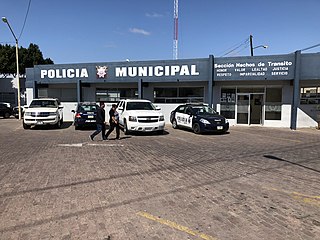 Law enforcement in Mexico is divided between federal, state, and municipal (local) entities. There are two federal police forces, 31 state police forces and two for Mexico City, and, an investigation of the Executive Secretariat of the National Public Safety System, indicates that there are 1,807 municipal police forces. There are 366 officers per 100,000 people, which equals approximately 500,000 in total, but systemic corruption is endemic and police forces are often poorly trained and underpaid. The average wage of a police officer is $350 per month, around that of a builder's labourer, which means that many police officers supplement their salaries with bribes. As of 2012, Mexico has a police force of over 544,000 people, making it the country with the fourth largest police force in the world, just behind China, India, and the United States. 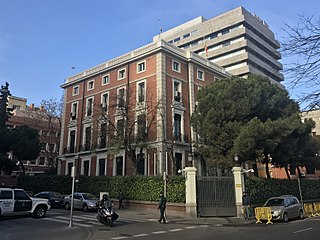 The Ministry of the Interior (MIR) is a department of the Government of Spain responsible for public security, the protection of the constitutional rights, the command of the law enforcement agencies, national security, immigration affairs, prisons, civil defense and road traffic safety. Through the Undersecretariat of the Interior and its superior body, the Directorate-General for Internal Policy, the Ministry is responsible for all actions related to ensuring political pluralism and the proper functioning of electoral processes.

Law enforcement in Mexico City is provided by two primary agencies; the Secretariat of Public Security of Mexico City, who provides uniformed or preventative police, and the Office of the Attorney General of Mexico City who provides plainclothes detectives and crime lab services.

The security policy of the Enrique Peña Nieto administration prioritizes the reduction of violence rather than attacking Mexico's drug trafficking organizations head-on, marking a departure from the strategy of the past six years during Felipe Calderón's administration. Peña Nieto has set up a number of conceptual and organizational changes from the past regime policy, and one of the biggest contrasts is the focus on lowering murder rates, kidnappings, and extortions, as opposed to arresting or killing the country's most-wanted drug lords and intercepting their drug shipments. The government of Calderón, however, has justified its position by stating that the current violence in the country is a necessary stage in Mexico's drug war, as weakening criminal groups fight for territorial control against one another and the government. Moreover, part of Peña Nieto's strategy also consists on the creation of a national police made up of 40,000 members, known as a "gendarmerie." He also proposed on centralizing the sub-federal police forces under one command. The president-elect emphasized that he does not support the involvement or presence of armed U.S. agents in Mexico, but considers allowing the United States to instruct Mexico's military training in counterinsurgency tactics. Beyond that, Peña Nieto promised that no other measures will be taken by the U.S. in Mexico. While campaigning, Peña Nieto appointed a former general of the National Police of Colombia as his external advisor for public security, and boldly promised to reduce 50% of the murder rates in Mexico by the end of his six-year term.

The Secretariat for Multidimensional Security of the Organization of American States is a part of the General Secretariat, which is headquartered in Washington, D.C., United States. The Secretariat for Multidimensional Security has a mandate to promote cooperation between Organization's Member States, Inter-American and international organizations, as well as with entities such as the United Nations and its subsidiaries, in order to analyze, prevent, confront and respond to security threats.

Claudia Ruiz Massieu Salinas, DBE is a Mexican lawyer and politician affiliated with the Institutional Revolutionary Party. She served as Secretary of Foreign Affairs following her appointment by President Enrique Peña Nieto in 2015 to which she resigned on 4 January 2017.

Carolina Monroy del Mazo is a Mexican politician and member of the Institutional Revolutionary Party, currently serving as the secretary general of the PRI and as a federal deputy to the LXIII Legislature of the Mexican Congress, representing the XXVII Federal Electoral District of the State of Mexico.

The Tax Administration Service is the revenue service of the Mexican federal government. The government agency is a deconcentrated bureau of the Secretariat of Finance and Public Credit, Mexico's cabinet-level finance ministry, and is under the immediate direction of the Chief of the Tax Administration Service. The SAT is responsible for collecting taxes, as well as applying fiscal and customs law, with the purpose of funding public spending in a proportional and equitable manner. Additionally, it is the bureau's responsibility to generate and collect information necessary for the formation and evaluation of fiscal policy.

The Secretary of State for Security (SES) of Spain is the second-highest-ranking official in the Ministry of the Interior.

In the United Mexican States, the federal executive power of the government is exercised by the president of the republic whose official denomination is Constitutional President of the United Mexican States, to carry out the development of its powers and functions, the president has the power to freely appoint members of his cabinet, each of which is the head of a secretariat of state that is responsible for a branch of the federal public administration; and the organization of these agencies and the powers that each have, are set by the Organic Law of the Federal Public Administration.

The National Institute for Safety and Health at Work is an autonomous agency of the Government of Spain. The INSST is considered a technical-scientific agency entrusted with the task of analyze and research on safety and health conditions at work, as well of promoting and supporting the improvement of them, in order to achieve a decrease in occupational hazards, work accidents and occupational diseases.