Secretary of State for War (France)

The Secretary of State was the name of several official governmental positions – supervising war, foreign affairs, the navy, the king's household, the clergy, Paris, and Protestant affairs – during the Ancien Régime in France, roughly equivalent to the positions of governmental ministers today. The positions were created in 1547, but gained in importance only after 1588. The various secretaries of state were considered part of the Great Officers of the Crown of France.

The Secretary of State of the Navy was one of the four or five specialized secretaries of state in France during the Ancien Régime. This Secretary of State was responsible for the French navy and for French colonies. In 1791, this title was changed to Minister of Marine.

The Secretary of State of the Maison du Roi was the secretary of state in France during the "Ancien Régime" and Bourbon Restoration in charge of the Département de la Maison du Roi. The exact composition of the ministry and the secretary's duties changed several times over the Early Modern period, but in general, the Département de la Maison du Roi oversaw four main areas: the "Maison du Roi", the "Bâtiments du Roi", the General Affairs of the Clergy, Affairs of the RPR, and the administration of the capital city of Paris and the provinces. The post later reappeared as the Minister for the Maison du Roi.

The Ministry of Europe and Foreign Affairs is the ministry in the government of France that handles France's foreign relations. Since 1855, its headquarters has been located on the Quai d'Orsay, 37. "Quai d'Orsay" is often used as a metonym for the ministry. 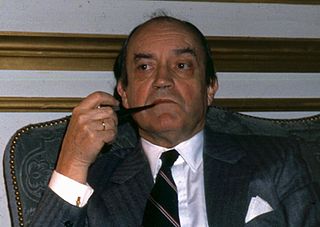 Claude Cheysson was a French Socialist politician who served as Foreign Minister in the government of Pierre Mauroy from 1981 to 1984.

The Kingdom of France in the early modern period, from the Renaissance to the Revolution (1789–1804), was a monarchy ruled by the House of Bourbon. This corresponds to the so-called Ancien Régime. The territory of France during this period increased until it included essentially the extent of the modern country, and it also included the territories of the first French colonial empire overseas. 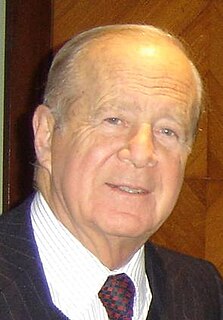 Jean François-Poncet was a French politician and diplomat who served as Minister of Foreign Affairs under Valéry Giscard d'Estaing between November 1978 and May 1981. From 1983 until 2010, he had been a member of the French Senate.

The Great Officers of the Crown of France were the most important officers of state in the French royal court during the Ancien Régime and Bourbon Restoration. They were appointed by the King of France, with all but the Grand Chancellor of France being appointments for life. These positions were not transmissible nor hereditary.

Phélypeaux is the name of a French family from Blésois region. Its two principal branches were those of the lords of Herbault, La Vrillière, and Saint Florentin, and of the counts of Pontchartrain and Maurepas. The family produced a number of individuals who played an important role in royal administration during the Ancien Régime.

A French Councillor of State is a high-level government official of administrative law in the Council of State of France.