Seeking The Gold, a bay colt, was bred in Kentucky by Ogden Phipps, who also owned him. One of numerous top class runners sired by Mr. Prospector, Seeking The Gold was out of the Buckpasser mare Con Game, who also produced Remsen Stakes winner Fast Play and the Jamaica Handicap winner Stacked Pack. [1]

Seeking The Gold ran only once as a juvenile, making his debut race in late December 1987 a winning one. [2]

Seeking The Gold showed his best form as a three-year-old in 1988. He won the Super Derby, Peter Pan Stakes, Dwyer Stakes, and Swale Stakes, a race in which he went into undefeated.

He was narrowly beaten by Forty Niner in both the Haskell Invitational Stakes and the Travers Stakes, [3] then also finished second again to Alysheba in the 1988 Breeder's Cup Classic, all with jockey Pat Day aboard coming with late runs and fast finishes for the runner-up placings. He was also second in both the Gotham Stakes and Wood Memorial Stakes to Private Terms earlier in the year.

Seeking The Gold ran twice as an older horse, winning an allowance at Belmont Park in May 1989, and finishing second nine days later in the Metropolitan Handicap behind Proper Reality. [2]

As a Broodmare Sire

Seeking The Gold has also achieved prominence as a broodmare sire, as his daughters have produced 76 graded stakes winners with combined progeny earnings of more than $213.8 million. [7] As a broodmare sire, his most notable runners include:

After being pensioned from stud duty in November 2008, Seeking the Gold was allowed to continue to reside in one of the stallion barns at Claiborne Farm. [4]

Seeking The Gold was humanely euthanized at Claiborne Farm on July 28, 2016 due to the infirmities of old age. On hearing of the horse's death, Shug McGaughey said "He was a very, very successful racehorse. One of my all-time favorites. He gave 110% every time." [8]

Dance Smartly (1988–2007) was a Champion Thoroughbred racemare who went undefeated in 1991 while winning the Canadian Triple Crown and becoming the first horse bred in Canada to ever win a Breeders' Cup race. She was inducted into both the Canadian and American Racing Halls of Fame.

Flower Alley is an American Thoroughbred racehorse and sire. Winner of the Travers Stakes during his racing career, he is best known as the sire of 2012 Kentucky Derby and Preakness Stakes winner I'll Have Another. 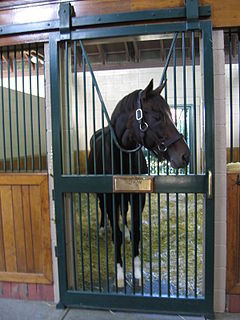 Tiznow is an American Thoroughbred racehorse best known for his wins in the Breeders' Cup Classic in 2000 and 2001, becoming the only horse to win this race twice. He was the 2000 American Horse of the Year and was inducted into the National Museum of Racing and Hall of Fame in 2009.

Personal Ensign was a champion Thoroughbred racehorse who retired undefeated with 13 wins. At the time, this was the longest win streak for a horse at the elite level of American racing in 80 years. Her come-from-behind victory in the 1988 Breeders' Cup Distaff over Kentucky Derby winner Winning Colors is considered one of the most memorable performances of the Breeders' Cup era.

My Flag was an American Thoroughbred racehorse. She was one of the leading American fillies of her generation, winning the Coaching Club American Oaks and finishing third against colts in the Belmont Stakes in 1996. My Flag was euthanized April 12, 2014, at age of 21, due to foaling complications for her bay colt by Bernardini.

Halfbridled is a dark bay or brown Thoroughbred racehorse. She is best known as the 2003 Eclipse Champion Two-Year-Old Filly.

Kris S. was an American Thoroughbred race horse who is best known as a highly successful sire. 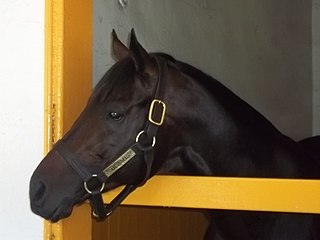 Take Charge Lady is an American Thoroughbred racehorse and broodmare. She was one of the leading fillies of her generation in the United States, winning 11 of her 22 races between April 2001 and November 2003, earning over $2 million. She recorded Grade I victories in the Ashland Stakes and consecutive editions of the Spinster Stakes, and also won the Alcibiades Stakes, Silverbulletday Stakes, Fair Grounds Oaks, Dogwood Stakes and Arlington Matron Stakes.

Epitome was an American Thoroughbred racehorse and broodmare. After losing five of her first six races she recorded her first significant win in the Pocahontas Stakes, before establishing herself as one of the best fillies of her generation in North America by taking the fourth edition of the Breeders' Cup Juvenile Fillies. She was voted the American Champion Two-Year-Old Filly of 1987. She won two minor races from six starts in the following year before being retired from racing. She had a solid breeding record as a broodmare, producing eight winners including the UAE Derby winner Essence of Dubai.

Countess Diana was an American Thoroughbred racehorse and broodmare. As a two-year-old in 1997, she dominated the juvenile fillies division in North America, winning five of her six races including the Schuylerville Stakes, Spinaway Stakes, Alcibiades Stakes and Breeders' Cup Juvenile Fillies. At the end of the year she was voted American Champion Two-Year-Old Filly and rated the best American two-year-old filly for more than fifty years. Her subsequent racing career was relatively disappointing: she failed to win in four starts in 1998 before winning two minor races in 1999. After her retirement from racing she had limited success as a broodmare and died in 2006.

Caressing is an American Thoroughbred racehorse and broodmare. She won five of her eighteen races in a track career which lasted from July 2000 until November 2002. As a two-year-old she won two of her first four races before recording a 47/1 upset win in the Breeders' Cup Juvenile Fillies, which led to her being named American Champion Two-Year-Old Filly. In the following year her career was disrupted by illness but she did win the La Troienne Stakes and the Singapore Plate. After competing without success as a four-year-old she was retired from racing and has had some success as a broodmare – the dam of two graded black type placed horses and multiple Grade 1 winner West Coast, Eclipse Champion 3 Year Old Male of 2018.

Surfside is an American Thoroughbred racehorse and broodmare. She was one of the best juvenile fillies in North America in 1999, winning four of her six races including the Frizette Stakes and the Hollywood Starlet Stakes as well a finishing third in the Breeders' Cup Juvenile Fillies. In the spring of the following year she won the Santa Ysabel Stakes, Las Virgenes Stakes and the Santa Anita Oaks and returned from injury to win the Clark Handicap. She was retired after two unsuccessful races as a four-year-old.

Sambuca Classica is a Thoroughbred mare best known as the dam of 2016 Champion Two-Year-Old Colt Classic Empire. She was an unsuccessful race mare, not winning in eight career starts and even starting once in a Maiden Claiming, but has proven to be more successful as a broodmare, with all five of her foals to race to date being winners.