Gurbuz District is situated in the southern part of Khost Province, Afghanistan. It borders Tani District to the west, Mando Zayi and Khost districts to the north and Pakistan to the east and south. The population is 23,200 (2006). The district center is the village of Sekhamir Kalay situated in the northwestern part of the district. It is inhabited by Gurbuz, a Wazir subtribe.

Khost is one of the 34 provinces of Afghanistan, located in the eastern part of the country. To the east, Khost Province is bordered by Waziristan and Kurram in Pakistan. Khost Province used to be part of Paktia Province in the past, and the larger region surrounding Khost is still called Loya Paktia. The city of Khost serves as the capital of Khost province. The population of the province is around 546,800, which is mostly a tribal society. Khost Airport serves the province for domestic flights to Afghanistan's capital, Kabul.

Bäk is a village in Khost Province, Afghanistan and the center of the boundary Bak District, close to the border with Pakistan. It is located on 33.5°N 70.05°E at 1137 m altitude.

Ḍaḍwāl is a village and the center of Mando Zay District in Khost Province, Afghanistan. It is located on 33.3103°N 69.7992°E at 1267m altitude on south side of Shamal river, it is connected to north a village Aliwat by a bridge which constructed by US army (PRT). The villagers are mostly educated and trained in different jobs. There is girls high school.

Qalandar District is situated in the western part of Khost Province, Afghanistan. It borders Paktia Province to the west, Musa Khel District to the north and east and Nadir Shah Kot District to the south. The population is 9,100 (2006). The district center is the village of Khost Mela 33.5150°N 69.6778°E.

Yakubi is the center of Sabari District in Khost Province, Afghanistan. It is located on 33.4608°N 69.99°E at 1,113 m altitude in the southeastern part of the district.

Tani District is situated in the southern part of Khost Province, Afghanistan. It borders Spera District to the west, Nadir Shah Kot and Mando Zayi to the north, Gurbuz District to the east and Pakistan to the south. The population is 52,800 (2006) people. The district center is the village of Tani, situated in the northeastern part of the district. Tani tribe is known as Tanoli in the some areas of Pakistan. The language spoken in Tani is Pashto.

Tani is a village and the center of Tani District, Khost Province, Afghanistan. It is located on 33.2422°N 69.8281°E at 1,303 m altitude. The main tongue spoken there is Pashto language. It is a neighbour to Mando Zai District 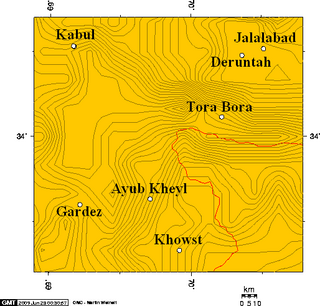 Ayub Kheyl is a small village 7 miles outside Khost, Afghanistan. It was the site on July 27, 2002 of a firefight by US soldiers, assisted by Afghan militia, against militants in the village. After the fight, the Americans captured the wounded 15-year-old Omar Khadr, who they learned was a Canadian citizen. He was among the youngest persons detained at Guantanamo Bay detention camp and the last Western citizen held there.

İskele District is a district of Cyprus. It is divided into three sub-districts: İskele Sub-district, Mehmetçik Sub-district and Yeni Erenköy Sub-district. Its capital is Trikomo, also known by its Turkish name, İskele. Its population was 23.098 in the 2011 census. Its Governor is Bünyamin Merhametsiz.

The Zamba Toy is a river of Khost Province, southeastern Afghanistan. It flows past the village of Zambar.

The Khost suicide bombing occurred on 12 July 2015 in Khost Province when a suicide bombing killed at least 33 people, including 12 children and another 10 people were wounded.