Semuc Champey (Where the river hides under the stones) is a natural monument in the department of Alta Verapaz, Guatemala, near the Q'eqchi' Maya town of Lanquín. It consists of a natural 300 m limestone bridge, under which passes the Cahabón River. Atop the bridge is a series of stepped, turquoise pools, a popular swimming attraction. Although it can be difficult to get to, Semuc is becoming more and more popular with travelers. [1]

Belize is a Caribbean country located on the northeastern coast of Central America. Belize is bordered on the northwest by Mexico, on the east by the Caribbean Sea, and on the south and west by Guatemala. It has an area of 22,970 square kilometres (8,867 sq mi) and a population of 408,487 (2019). Its mainland is about 180 mi (290 km) long and 68 mi (110 km) wide. It has the lowest population and population density in Central America. The country's population growth rate of 1.87% per year is the second highest in the region and one of the highest in the Western Hemisphere. 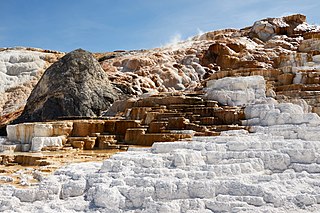 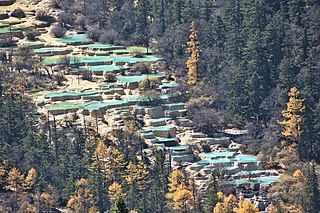 Huanglong is a scenic and historic interest area in the northwest part of Sichuan, China. It is located in the southern part of the Minshan mountain range, 370 kilometres (230 mi) north-northwest of the capital Chengdu. This area is known for its colorful pools formed by calcite deposits, especially in Huanglonggou, as well as diverse forest ecosystems, snow-capped peaks, waterfalls and hot springs. Huanglong is also home to many endangered species including the giant panda and the Sichuan golden snub-nosed monkey. Huanglong was declared a World Heritage Site by UNESCO in 1992. 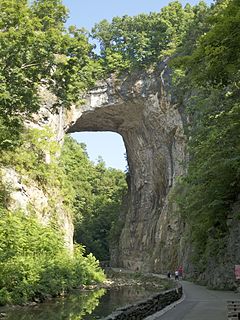 Natural Bridge is a geological formation in Rockbridge County, Virginia, comprising a 215-foot-high (66 m) natural arch with a span of 90 feet (27 m). It is situated within a gorge carved from the surrounding mountainous limestone terrain by Cedar Creek, a small tributary of the James River. Consisting of horizontal limestone strata, Natural Bridge is the remains of the roof of a cave or tunnel through which the Cedar Creek once flowed.

Dulce River is a river in Guatemala, completely contained within the department of Izabal. It is part of a lake and river system that has become a popular cruising sailboat destination.

San Agustín Lanquín, often referred to simply as Lanquín, is a municipality in the Guatemalan department of Alta Verapaz. It is situated at 380 m above sea level. It has a population of about 16,500 people, many of Q'eqchi' Maya descent. It covers an area of 208 km².

Chesterfield Gorge is a nature reserve located in Chesterfield, Massachusetts, USA. The property is owned by The Trustees of Reservations, who have administered the property since 1929. 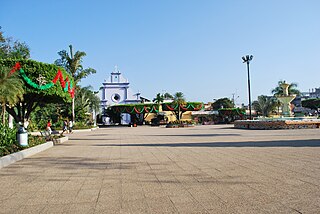 Ayutla is a municipality in the San Marcos Department of Guatemala. It is situated along the Suchiate River natural border with Mexico in the southern part of the department. The municipality center is Ciudad Tecún Umán. There is a combined road and rail bridge known as Puente Rodolfo Robles linking Ayutla to Ciudad Hidalgo in Chiapas, Mexico.

The Río Cahabón is a 196-kilometre (122 mi) long river in eastern Guatemala. From its sources in the Sierra de las Minas range in Baja Verapaz it turns north and then east into Alta Verapaz, running through Santa Cruz Verapaz, Tactic, Cobán, San Pedro Carchá, Semuc Champey and Santa María Cahabón below which it joins the smaller Polochic River.

Guatemala, officially the Republic of Guatemala, is a country in Central America bordered by Mexico to the north and west, Belize and the Caribbean to the northeast, Honduras to the east, El Salvador to the southeast and the Pacific Ocean to the south. With an estimated population of around 17.2 million, it is the most populous country in Central America. Guatemala is a representative democracy; its capital and largest city is Nueva Guatemala de la Asunción, also known as Guatemala City.

Andrea Cardona is a Guatemalan mountaineer, the first Central American woman and the Caribbean to reach the world's highest peak on Mount Everest, 8,848 metres (29,029 ft) above sea level, and the first Latin American to complete the Adventurers Grand Slam.

Tourism became one of the main drivers of the economy, an industry that reported more than $1.8 billion in 2008. Guatemala receives about two million tourists annually.