Last updated August 26, 2021
Soviet and Russian mathematician
In this Eastern Slavic naming convention, the patronymic is Petrovichand the family name is Novikov.

Sergei Petrovich Novikov (also Serguei) (Russian: Серге́й Петро́вич Но́виков) (born 20 March 1938) is a Soviet and Russian mathematician, noted for work in both algebraic topology and soliton theory. In 1970, he won the Fields Medal.

He grew up in a family of talented mathematicians. His father was Pyotr Sergeyevich Novikov, who gave a negative solution to the word problem for groups. His mother Lyudmila Vsevolodovna Keldysh and maternal uncle Mstislav Vsevolodovich Keldysh were also important mathematicians. [1]

Novikov's early work was in cobordism theory, in relative isolation. Among other advances he showed how the Adams spectral sequence, a powerful tool for proceeding from homology theory to the calculation of homotopy groups, could be adapted to the new (at that time) cohomology theory typified by cobordism and K-theory. This required the development of the idea of cohomology operations in the general setting, since the basis of the spectral sequence is the initial data of Ext functors taken with respect to a ring of such operations, generalising the Steenrod algebra. The resulting Adams–Novikov spectral sequence is now a basic tool in stable homotopy theory. [2] [3]

Novikov also carried out important research in geometric topology, being one of the pioneers with William Browder, Dennis Sullivan and C. T. C. Wall of the surgery theory method for classifying high-dimensional manifolds. He proved the topological invariance of the rational Pontryagin classes, and posed the Novikov conjecture. This work was recognised by the award in 1970 of the Fields Medal. He was not allowed to travel to Nice to accept his medal, but he received it in 1971 when the International Mathematical Union met in Moscow. From about 1971 he moved to work in the field of isospectral flows, with connections to the theory of theta functions. Novikov's conjecture about the Riemann–Schottky problem (characterizing principally polarized abelian varieties that are the Jacobian of some algebraic curve) stated, essentially, that this was the case if and only if the corresponding theta function provided a solution to the Kadomtsev–Petviashvili equation of soliton theory. This was proved by Takahiro Shiota (1986), [4] following earlier work by Enrico Arbarello and Corrado de Concini (1984), [5] and by Motohico Mulase (1984). [6]

In 1984 he was elected as a member of Serbian Academy of Sciences and Arts.

As of 2004 [update] , Novikov is the Head of the Department of geometry and topology at the Steklov Mathematical Institute. He is also a Distinguished University Professor for the Institute for Physical Science and Technology, which is part of the University of Maryland College of Computer, Mathematical, and Natural Sciences at University of Maryland, College Park [7] and is a Principal Researcher of the Landau Institute for Theoretical Physics in Moscow.

In 2005 Novikov was awarded the Wolf Prize for his contributions to algebraic topology, differential topology and to mathematical physics. [8] He is one of just eleven mathematicians who received both the Fields Medal and the Wolf Prize. In 2020 he received the Lomonosov Gold Medal of the Russian Academy of Sciences. [9] 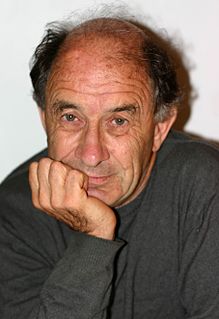 Sir Simon Kirwan Donaldson is an English mathematician known for his work on the topology of smooth (differentiable) four-dimensional manifolds, Donaldson–Thomas theory, and his contributions to Kähler geometry. He is currently a permanent member of the Simons Center for Geometry and Physics at Stony Brook University in New York, and a Professor in Pure Mathematics at Imperial College London.

Vladimir Gershonovich Drinfeld, surname also romanized as Drinfel'd, is a renowned mathematician from the former USSR, who emigrated to the United States and is currently working at the University of Chicago. 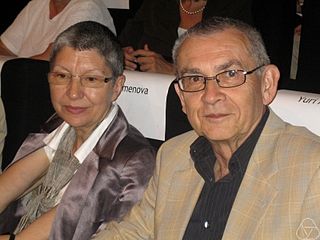 Yuri Ivanovich Manin is a Russian mathematician, known for work in algebraic geometry and diophantine geometry, and many expository works ranging from mathematical logic to theoretical physics. Moreover, Manin was one of the first to propose the idea of a quantum computer in 1980 with his book Computable and Uncomputable. 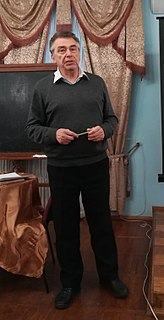 Victor Matveevich Buchstaber is a Soviet and Russian mathematician known for his work on algebraic topology, homotopy theory, and mathematical physics.

In mathematics, secondary calculus is a proposed expansion of classical differential calculus on manifolds, to the "space" of solutions of a (nonlinear) partial differential equation. It is a sophisticated theory at the level of jet spaces and employing algebraic methods.

Matthias Kreck is a German mathematician who works in the areas of Algebraic Topology and Differential topology. From 1994 to 2002 he was director of the Mathematical Research Institute of Oberwolfach and from October 2006 to September 2011 he was the director of the Hausdorff Center for Mathematics at the University of Bonn, where he is currently a professor. 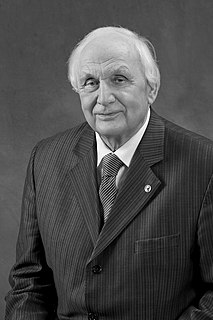 Boris Anatolievich Dubrovin was a Russian mathematician, Doctor of Physical and Mathematical Sciences (1984).

Henri Moscovici is a Romanian-American mathematician, specializing in non-commutative geometry and global analysis. 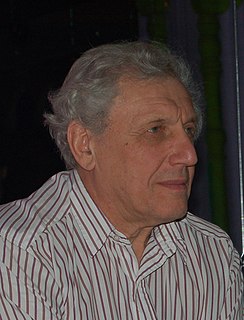 Alexandre Mikhailovich Vinogradov was a Russian and Italian mathematician. He made important contributions to the areas of differential calculus over commutative algebras, the algebraic theory of differential operators, homological algebra, differential geometry and algebraic topology, mechanics and mathematical physics, the geometrical theory of nonlinear partial differential equations and secondary calculus.

Dan Burghelea is a Romanian-American mathematician, academic, and researcher. He is an Emeritus Professor of Mathematics at Ohio State University.

Alexandr Sergeevich Mishchenko is a Russian mathematician, specializing in differential geometry and topology and their applications to mathematical modeling in the biosciences.