He is known primarily for his semi-autobiographical book about Rasputin. In this work he was supported by Maxim Gorky, since 1902 a friend of Lenin. Gorky hoped that Trufanov's story on Rasputin would discredit the Tsar's family and eventually contribute to the revolutionary propaganda.[ citation needed ]

Sergei Trufanov was born in stanitsa Mariinskaya and grew up in a small cottage near the Don river as the son of a local deacon. He was one of thirteen children; according to himself five died young of starvation. At the age of ten he went to school in Novocherkassk. At the age of 15 he entered the local theological seminary. Five years later he graduated and went to the capital to attend the St. Petersburg Theological Academy.

In 1903 he was ordained a hieromonk under the name Iliodor; two years later he graduated from the academy. There he met Father Gapon. Iliodor worked with the poor and expected that the clergy, not the revolutionaries could change the country. He was discovered by Theofan of Poltava and met Rasputin. Iliodor was appointed a lecturer at the seminary in Jaroslavl, but returned to the capital within a year. He was invited to the Peterhof Palace but scandalized his audience in a sermon, defending a land reform, which should be ordered by the Tsar. The Russian aristocrats and the Most Holy Synod were shocked with his behavior. The Synod decided to ban Iliodor, but Rasputin and the Tsar defended him. Instead Iliodor moved to Volhynia and lived in Pochayiv Lavra, the center of Panslavism. In a paper he attacked the revolutionaries and the Jews. [1] According to himself Iliodor turned against the right-wing Union of the Russian People and the Black Hundreds movement, because they believed in the Tsar's autocracy.

He gained notoriety for attacking the prime-minister Pyotr Stolypin, industrialists, and local politicians. Then he was prohibited to preach by the Most Holy Synod. In 1908 he was rescued by Bishop Hermogen and appointed in Tsaritsyn, where the URP had founded its first branch and Iliodor gathered huge crowds. Iliodor created Holy Spirit Monastery in 1909. In the year after he was forbidden to preach any longer and exiled to Minsk. He was invited to Tsarskoye Selo to meet with the Tsarina; not in the Alexander Palace, but in the house of Anna Vyrubova. [2] Iliodor was allowed to go back to Tsaritsyn on request of Rasputin. Stolypin demanded Iliodor had to be banned to Novosil, and the Tsar agreed, but the abbot escaped and went back to Tsaritsyn.

In 1909 Iliodor and Grigori Rasputin visited his village by train. [3] Iliodor began to wonder if Rasputin was a devil or a saint, but defended him against attacks in the press in 1910. In early 1911 Rasputin traveled to the Holy Land. On his way back he visited Tsaritsyn. Iliodor had been invited by the Tsar on 21 May, who asked him not to attack his ministers, but the revolutionaries and the Jews. [4] Five days later Iliodor was promoted and became archimandrite. In December 1911 Hermogenes and Iliodor came into conflict with Rasputin, who liked to touch and kiss and had almost free access to the Imperial family. After having been beaten by Hermogen, [5] in a monastery on Vasilyevsky Island, Rasputin complained to the Imperial couple.

Iliodor started a slander and blackmail campaign against Rasputin. Hinting that Alexandra and Rasputin were lovers, he showed Makarov a satchel of letters, one written by the Tsarina and four by her daughters. [6] The given or stolen [7] letters were handed to the Tsar. [8]

In 1912, Iliodor renounced the Russian Orthodox Church, published an apology to Jews, and was defrocked. His monastery was closed; he was banned to the Frolishi monastery in the Volodarsky District, Nizhny Novgorod Oblast. He seems to have escaped to Peter Badmayev in St Petersburg.

In Summer 1914, after an attack on Rasputin by Khioniya Kozmishna Guseva, he fled all the way around the Gulf of Bothnia to Christiania (present-day Oslo), Norway with the help of Grand Duke Nicholas and Maxim Gorki. Rasputin believed Iliodor and Vladimir Dzhunkovsky had organized the attack. [9] [10] Guseva, a fanatically religious woman, had been his adherent in earlier years and "denied Iliodor's participation, declaring that she attempted to kill Rasputin because he was spreading temptation among the innocent." [11] The local procurator decided to suspend any action against Iliodor for undisclosed reasons, [12] Guseva was locked up in a madhouse in Tomsk and a trial was avoided. [13]

Most of Rasputin's enemies had by now disappeared. Stolypin was dead, Count Kokovtsov fallen from power, Theofan of Poltava exiled, Bishop Hermogen illegally banished and Iliodor in hiding. [14]

Together with Alexei Khvostov he concocted a plan to kill Rasputin early 1916. Then Iliodor tried to bribe the Tsarina with publishing his book on Rasputin. [15] In June 1916 he sailed to New York. In the lost silent film The Fall of the Romanoffs (1917), Iliodor played himself. In the following he published his book. Casimir Pilenas, in his correspondence with the American Jewish Committee, claimed to be his "agent". In 1918, he returned to Soviet Russia, offering his services to Lenin, and lived for several years in Tsaritsyn. In 1922 he took his family to NYC, where he became a Baptist and worked as a janitor in the Metropolitan Life Insurance Tower, [16] and spent the remainder of his life in New York City.

Grigori Yefimovich Rasputin was a Russian mystic and self-proclaimed holy man who befriended the family of Nicholas II, the last emperor of Russia, and gained considerable influence in late imperial Russia. 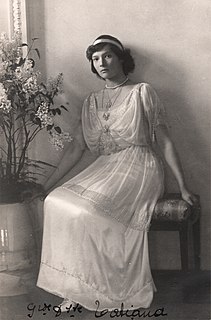 Grand Duchess Tatiana Nikolaevna of Russia was the second daughter of Tsar Nicholas II, the last monarch of Russia, and of Tsarina Alexandra. She was born at Peterhof, Saint Petersburg. 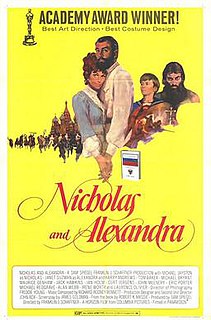 Nicholas and Alexandra is a 1971 British biographical film directed by Franklin J. Schaffner and written by James Goldman, based on Robert K. Massie's 1967 book of the same name, which is a partial account of the last ruling Russian monarch, Tsar Nicholas II of Russia, and his wife, Tsarina Alexandra. It stars Michael Jayston and Janet Suzman, with a number of major actors in supporting roles. 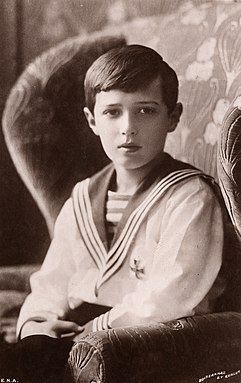 Alexei Nikolaevich of the House of Romanov, was the last Tsesarevich and heir apparent to the throne of the Russian Empire. He was the youngest child and only son of Emperor Nicholas II and Empress Alexandra Feodorovna. He was born with haemophilia, which his parents tried treating with the methods of faith healer Grigori Rasputin.

Pyotr Arkadyevich Stolypin was a Russian politician. He was the third Prime Minister of Russia, and Minister of Internal Affairs of the Russian Empire from 1906 to his assassination in 1911.

Alexander Fyodorovitch Trepov was the Prime Minister of the Russian Empire from 23 November 1916 until 9 January 1917. He was conservative, a monarchist, a member of the Russian Assembly, and an advocate of moderate reforms opposed to the influence of Grigori Rasputin. 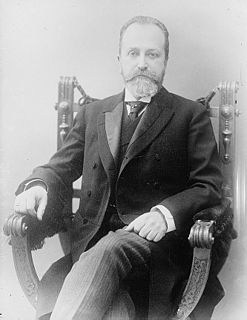 Count Vladimir Nikolayevich Kokovtsov was a Russian politician who served as the Prime Minister of Russia from 1911 to 1914, during the reign of Emperor Nicholas II. 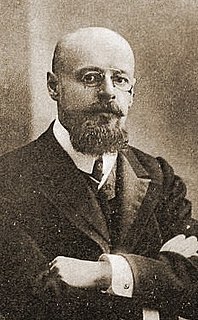 Vladimir Mitrofanovich Purishkevich was a right-wing politician in Imperial Russia, noted for his monarchist, ultra-nationalist, antisemitic and anticommunist views. Because of his restless behaviour, he was regarded as a loose cannon. At the end of 1916, he participated in the killing of Grigori Rasputin.

Khioniya Kuzminichna Guseva was a townswoman (meshchanka) of Syzran. Starting in 1899 she lived in Tsaritsyn, now known as Volgograd. She became an adherent of the monk Iliodor until 1912. She attempted to kill Grigori Rasputin in 1914. 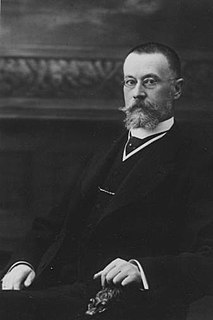 Aleksandr Aleksandrovich Makarov was a Russian politician who served as the Minister of Internal Affairs (1911–1912) and Minister of Justice (1916) of the Russian Empire.

Rasputin: Dark Servant of Destiny is a 1996 biographical historical drama television film which chronicles the last four years (1912–16) of Grigori Rasputin's stint as a healer to Alexei Nikolaevich, Tsarevich of Russia; the heir apparent to the Russian throne as well as the only son of Tsar Nicholas II of Russia and Empress Alexandra Feodorovna; who suffered from hemophilia. The film is narrated in the first person by Alexei.

Alexander Ivanovich Guchkov was a Russian politician, Chairman of the Third Duma and Minister of War in the Russian Provisional Government.

Aleksey Nikolayevich Khvostov was a Russian politician. He opposed constitutional reforms and was an anti-semite. 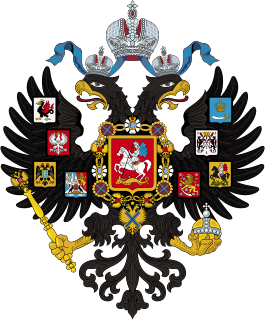 The State Duma or Imperial Duma was the Lower House, part of the legislative assembly in the late Russian Empire, which held its meetings in the Taurida Palace in St. Petersburg. It convened four times between 27 April 1906 and the collapse of the Empire in February 1917. The First and the Second Dumas were more democratic and represented a greater number of national types than their successors. The Third Duma was dominated by gentry, landowners and businessmen. The Fourth Duma held five sessions; it existed until 2 March 1917, and was formally dissolved on 6 October 1917.

Georgiy Yefremovich Dolganyov was a prominent Russian Orthodox religious figure, a monarchist anti-communist, who supported the Union of the Russian People and Black Hundreds. In 1917, he was appointed as Hermogenes, Bishop of Tobolsk and Siberia. In April 1918, he was arrested by Bolsheviks and drowned in the Tura River. He was canonized on 31 March 1999 being regarded as a Saint martyr.

Theofan of Poltava was a Russian archbishop and theologian in the Eastern Orthodox Church. He was widely known as the "only Russian ascetic bishop". Theofan was the occasional confessor of Tsar Nicholas II of Russia and his wife Alexandra.

Stepan Petrovich Beletsky was a Ukrainian statesman in the Russian Empire and the Head of the Police Department and involved in scandals around Grigori Rasputin. In January 1914 he was appointed as senator in the State Council.