José Miguel Cabrera Torres, commonly known as Miguel Cabrera and nicknamed "Miggy", is a Venezuelan professional baseball player. He is the first baseman for the Detroit Tigers of Major League Baseball (MLB). Since his debut in 2003 he has been a two-time American League (AL) Most Valuable Player (MVP) award winner, a four-time AL batting champion, and an 11-time MLB All-Star. He has played at first and third base for most of his major league career, but primarily played left and right field before 2006. He claimed the 17th MLB Triple Crown in 2012, the first to do so in 45 seasons.

Ryan Frank Cabrera is an American singer-songwriter and musician.

Sergio Rossi is an Italian women’s footwear company that also produces a limited range of handbags and other accessories. The brand is renowned for its craftsmanship and feminine designs. The Sergio Rossi label was owned by the French Group Kering until it was sold to Italian buyout firm Investindustrial in December 2015. Riccardo Sciutto is the CEO of Sergio Rossi.

Santiago Cabrera is a Venezuelan-born Chilean-British actor, most known for his roles as the character Isaac Mendez in the television series Heroes, Lancelot in the BBC drama series Merlin, and Aramis in the BBC series The Musketeers.

John Cabrera is an American actor, writer and director best known for his role as Brian Fuller on the television show Gilmore Girls on The WB. He has also appeared on Studio 60 on the Sunset Strip, NCIS, American Dreams, Miracles, and CSI.

The Strategy of the Snail is a 1993 Colombian comedy-drama film directed and produced by Colombian filmmaker and director Sergio Cabrera. The film stars Frank Ramírez, Florina Lemaitre, Humberto Dorado, Fausto Cabrera and Carlos Vives. The film is a winner of the Berlin International Film Festival and the Biarritz Film Cinema Festival of Latin America. The film deals with the hardships of lower income families in Bogotá, the breach between rich and poor, and their interactions in a highly stratified social system. The film was selected as the Colombian entry for the Best Foreign Language Film at the 67th Academy Awards, but was not accepted as a nominee.

Sergio Gutiérrez Sánchez is a Spanish film director and screenwriter. Sánchez has written and directed his own screenplays for short films such as Temporada baja (2003) and 7337 (2000).

The San Francisco Giants are an American baseball team. Their 2012 season marked their 130th year in Major League Baseball, as well as their 55th year in San Francisco since their move from New York following the 1957 season, and the thirteenth at AT&T Park. The Giants finished with a record of 94–68, 1st place in the NL West, and pulled off a massive upset over the Cincinnati Reds in five games in the Division Series thereby becoming the first National League team to come back from a 2–0 deficit in a best-of-five series by sweeping three games in the opponent's park. The Giants defeated the St. Louis Cardinals in seven games after overcoming a 3-1 deficit in the NL Championship Series and advancing to the 2012 World Series to face the Detroit Tigers. They swept the Tigers in four games to win their second World Series title in three years.

Sergio Akeen Campbell is a Jamaican international footballer who plays as a defender. 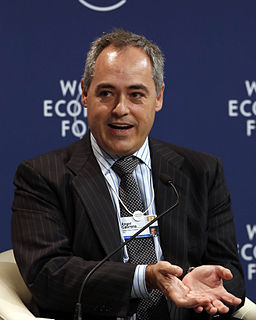 Ángel Cabrera Izquierdo is the sixth President of George Mason University, the past President of Thunderbird School of Global Management, and the former dean of IE Business School. His scholarship includes work on learning, management and leadership.

Helene Louvart is a French cinematographer. She graduated in 1985 from the prestigious Louis-Lumiere Collège in Paris. She is a member of The French Society of Cinematographers (AFC), the French equivalent of American Society of Cinematographers. She has worked with many French and international directors, such as Wim Wenders, Agnès Varda, Claire Denis, Christophe Honoré, Jacques Doillon, Nicolas Klotz, Sandrine Veysset, Marc Recha, Dorothée Smith or Léos Carax.

Like Crazy is a 2016 Italian comedy-drama film directed by Paolo Virzì, starring Valeria Bruni Tedeschi and Micaela Ramazzotti. It tells the story of two women from different backgrounds who become friends while being treated at a mental institution. It was screened in the Directors' Fortnight section at the 2016 Cannes Film Festival.

Ana Cabrera is an American journalist who currently works as a television news anchor for CNN.

Sergio Cabrera may refer to: