Celibidache frequently refused to release his performances on commercial recordings during his lifetime, claiming that a listener could not obtain a "transcendental experience" outside the concert hall. Many of the recordings of his performances were released posthumously. He has nonetheless earned international acclaim for celebrated interpretations of the classical music repertoire and was known for a spirited performance style informed by his study and experiences in Zen Buddhism. He is regarded as one of the greatest conductors of the 20th century. [1] [2]

Sergiu Celibidache was born on 28 June 1912 [note 1] , as the son of Demostene Celibidache and Maria Celibidache, in Roman, a small city in the Moldavia region of Romania, where his father was a government official. [3] [4] He grew up in Iași, where his family soon moved after his birthday. [5] He was already improvising at the piano by the age of four, and after a traditional schooling in mathematics, philosophy and music in Iași, he was sent by his father to Bucharest and then to Paris where he continued his studies. His father had expected him to pursue a political career in Romania. [3] [5] However, Celibidache chose to enroll in the Hochschule für Musik (Academy of Music) in Berlin, Germany in 1936 where he studied composition under Heinz Tiessen and later conducting under Kurt Thomas, Walter Gmeindl and Fritz Stein. [3] [4] He continued with doctoral studies at the Friedrich Wilhelm University (Friedrich-Wilhelms-Universität) in Berlin where he studied philosophy with Nicolai Hartmann and Eduard Spranger and musicology with Arnold Schering and Georg Schünemann. [3] He submitted a dissertation on Franco-Flemish composer Josquin des Prez (c. 1450–1521) and his work during the Renaissance. He received his degree in 1944. [3] [4] Throughout the 1940s, he accompanied and was romantically involved with Romanian-born dancer and choreographer Iris Barbura. During his studies in Berlin, Celibidache was introduced to Zen Buddhism through the influence of his teacher, Martin Steinke, and the tenets of Buddhism informed Celibidache's worldview and work for the rest of his life. [4] In a 1986 interview Celibidache said "I was born a Christian Orthodox, and studied philosophy, but I still couldn't find solutions to my problems. It was through Steinke that I found [...] the way of Zen. All I can say is that without Zen I couldn't have known this strange principle that the beginning is the end. Music is nothing but the materialization of this principle." [6]

Sergiu Celibidache studied in Berlin and, from 1945 to 1952, he was principal conductor of the Berlin Philharmonic, Europe's most celebrated orchestra. He got his big break immediately after the war in tragic circumstances, as Leo Borchard, who had received clearance from the Americans to perform, was shot during a nocturnal car ride and no other "acceptable" (de-Nazified) conductors were available, so the job fell to Celibidache. [7] [6] However, he fought selflessly to have Furtwangler (who was a great influence on the young conductor) reinstated as orchestra leader, and from 1947 until 1952 the two shared the responsibilities of conducting the Berlin Philharmonic. [7] Celibidache later worked with radio orchestras in Stockholm, Stuttgart and Paris. He also worked in Britain in the late 1940s and 1950s, due partly to the promotional efforts of the pianist Eileen Joyce and her partner, an artists' agent. Joyce said that Celibidache was the greatest conductor she had ever worked with – "he was the only one who got inside my soul". [8] In 1970 he was awarded Denmark's Sonning Award. From 1979 until his death he was music director of the Munich Philharmonic. He regularly taught at Hochschule für Musik Mainz in Germany and in 1984 taught at the Curtis Institute in Philadelphia, Pennsylvania. Teaching was a major focus throughout his life and his courses were frequently open to all without fee. Among his notable students are Françoys Bernier, Jordi Mora, Peter Perret, Bernhard Sieberer, Markand Thakar, Konrad von Abel, [9] Nils-Göran Areskoug and Tom Zelle as well as The Danish Windquintet.[ citation needed ]

He appeared in the film Ambassadors of Music (1952) where he conducted the Berlin Philharmonic in a complete performance of Ludwig van Beethoven's Egmont overture.

His later career was marred by controversy and accusations of sexism and discrimination that came to light during a 12-year legal battle during his tenure at the Munich Philharmonic [10] due to an ongoing issue with trombonist Abbie Conant.

Celibidache died at the age of 84 on 14 August 1996 at La Neuville-sur-Essonne, near Paris. He was buried in the Cimetière de Neuville sur Essone.

Celibidache's approach to music-making is often described more by what he did not do instead of what he did. For example, much has been made of Celibidache's "refusal" to make recordings even though almost all of his concert activity actually was recorded with many released posthumously by major labels such as EMI and Deutsche Grammophon with the consent of his family. [11] Nevertheless, Celibidache paid little attention to making these recordings, which he viewed merely as by-products of his orchestral concerts.

Celibidache's focus was instead on creating, during each concert, the optimal conditions for what he called a "transcendent experience". Aspects of Zen Buddhism, such as ichi-go ichi-e , strongly influenced his thinking. He believed that transcendental experiences were extremely unlikely to ensue when listening to recorded music, so he eschewed them. As a result, some of his concerts did provide audiences with exceptional and sometimes life-altering experiences, including, for example, a 1984 concert in Carnegie Hall by the Orchestra of the Curtis Institute that New York Times critic John Rockwell touted as the best of his 25 years of concert-going. [12]

Celibidache was well known for his demands for extensive rehearsal time with orchestras. [13] An oft-mentioned feature of many of his concerts, captured in the live recordings of them, is a slower tempo than what is considered the norm, while, in fast passages, his tempi often exceeded expectations. [14] In Celibidache's own view, however, criticism of a recording's tempo is irrelevant, as it is not (and cannot be) a critique of the performance but rather of a transcription of it, without the ambience of the moment, for him, a key factor in any musical performance. As Celibidache explained, the acoustic space in which one hears a concert directly affects the likelihood of the emergence of his sought-after transcendent experience. The acoustic space within which one hears a recording of one of his performances, on the other hand, has no impact on the performance, as it is impossible for the acoustic features of that space to stimulate musicians to play slower or faster.

That his recorded performances differ so widely from the majority of other recordings has led them to be seen by some as collectors' items rather than mainstream releases, 'one-offs' rather than reference recordings. [15] 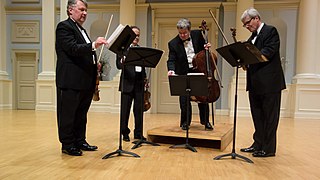 The Emerson String Quartet, also known as the Emerson Quartet, is a professional string ensemble – in residence at the Stony Brook University. During the 1980s the musical ensemble was in residence at The Hartt School located in West Hartford, Connecticut. Choosing American poet and philosopher Ralph Waldo Emerson as namesake, the quartet formed at the Juilliard School as a student ensemble. They turned professional in 1976, with both of their violinists having studied under the tutelage of the renowned Oscar Shumsky, alternating as first and second violinists. When it was formed, the Emerson Quartet was one of the first with the two violinists alternating chairs.

The London Classical Players (LCP) was a British orchestra that specialized in music following historically informed performance (HIP) practices and orchestral performances on period musical instruments. Sir Roger Norrington founded the LCP in 1978. From 1978 to 1992, the concertmaster of the London Classical Players was baroque violinist John Holloway. The LCP made a variety of recordings for EMI Classics. Many of the players in the LCP overlapped with four other major HIP orchestral ensembles, the Academy of Ancient Music, the English Concert, the Orchestra of the Age of Enlightenment, and the English Baroque Soloists.

Elisabeth Batiashvili, professionally known as Lisa Batiashvili, is a prominent Georgian violinist active across Europe and the United States. A former New York Philharmonic artist-in-residence, she is acclaimed for her "natural elegance, silky sound and the meticulous grace of her articulation." Batiashvili makes frequent appearances at high-profile international events; she was the violin soloist at the 2018 Nobel Prize concert.