Sergo (Sergei) Parmenovich Kotrikadze (Georgian :სერგო კოტრიკაძე, Russian : Серге́й Парменович Котрикадзе) (9 August 1936 – 3 May 2011) was a Georgian association footballer from the former Soviet Union who played for FC Dinamo Tbilisi and FC Torpedo Kutaisi. [1] He was part of the USSR's squad for the 1962 FIFA World Cup, [2] but did not win any caps, although he played in two Olympic qualifiers. 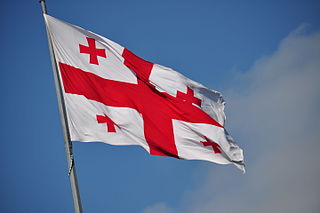 The Georgians or Kartvelians are a nation and Caucasian ethnic group native to Georgia. Large Georgian communities are also present throughout Russia, Turkey, Greece, Iran, Ukraine, United States, and to a lesser extent throughout the European Union. 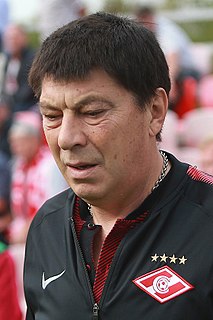 Rinat Fayzrakhmanovich Dasayev is a Soviet-Russian football coach and a former goalkeeper, who played in three World Cups with the Soviet national team. He is considered the second best Russian goalkeeper ever behind Lev Yashin, and one of the best in the world in the 1980s. He was awarded the title of the World’s Best Goalkeeper of the Year award in 1988 by the IFFHS. In a 1999 IFFHS poll, he was elected the sixteenth greatest European goalkeeper of the twentieth century, alongside Gianpiero Combi, and the seventeenth greatest goalkeeper of the century. In 2004, he was named by Pelé as one of the top 125 greatest living footballers. He had to retire from active coaching in late 2018 due to knee injuries and currently works as goalkeeping consultant with FC Spartak-2 Moscow and Spartak's youth teams.

FC WIT Georgia is a Georgian football team from Tbilisi. The team is sponsored by WIT Georgia Ltd, a pet food, accessories, and human and veterinary pharmaceuticals import company. WIT stands for World Innovation Technologies. They play their home games at Mtskheta Park at Mtskheta. 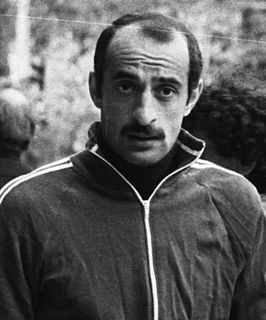 Igor Mihailovich Shalimov ; born 2 February 1969) is a Russian football manager and a former midfielder. He is the manager of FC Khimki. He primarily played as a wide midfielder. 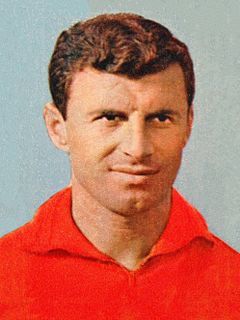 Slava Kalistratovich Metreveli was a Soviet and Georgian football player and later a football manager. 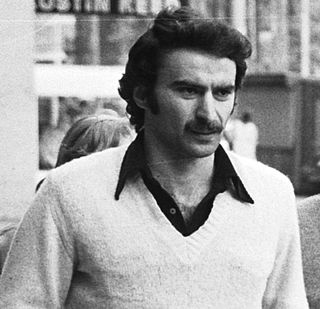 Football is the most popular sport in Azerbaijan. Azeri football is organized by the Association of Football Federations of Azerbaijan, or AFFA, which runs the national, professional football league, the AFFA Supreme League, and the Azerbaijani national football team.

Mikheil Meskhi was a Georgian footballer. Nicknamed the "Georgian Garrincha" for his dazzling wing play, Meskhi was a creative force on the left flank for the Soviet Union.