Serravalle is a castello located in the European republic of San Marino. With a population of 10,878 [1] inhabitants (of which 2,000 are of foreign origin) and an area of 10.53 km2, it is not only the most densely populated municipality in San Marino, but it also contains its largest settlement (Dogana). Serravalle is located on the edge of the Apennine Mountains.

The town borders on Sammarinese municipalities of Domagnano and Borgo Maggiore and the Italian municipalities Verucchio, Rimini and Coriano. Serravalle counts a surrounding quarter named Galazzano, where the weather station and an industrial area are located. [2] Serravalle has San Marino's northernmost and lowest elevated points. The outer edge of Serravalle is about 10 kilometres (6.2 mi) from downtown Rimini and the Adriatic Sea.

First mentioned in a 962 document, in medieval times this town was called Castrum Olnani (later Olnano), the village of the elm trees.[ citation needed ] Serravalle attached to San Marino in 1463, during the last territorial expansion of the Republic.[ citation needed ]

San Marino is a small European republic, with limited public transport facilities. It is an enclave in central Italy. The principal public transport links involve buses, helicopters, and an aerial tramway. There was a public electric railway network, a small part of which has been preserved and returned to service in 2012 as a tourist attraction.

The City of San Marino, also known simply as San Marino and locally as Città, is the capital city of the Republic of San Marino, Southern Europe. The city has a population of 4,044. It is on the western slopes of San Marino's highest point, Monte Titano. 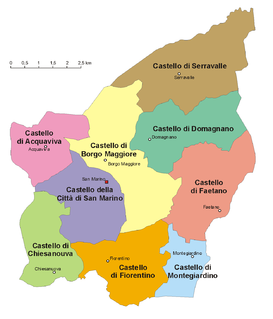 These are the 9 castelli (municipalities) of San Marino: 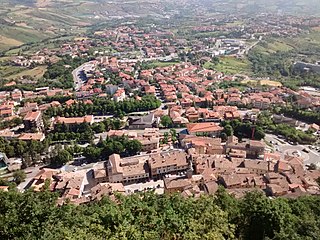 Associazione Sportiva Dilettantistica Victor San Marino, better known as San Marino, is a Sammarinese professional association football club based in the city of Serravalle, that competes in the Eccellenza, the fifth tier of Italian football.

Stadio Olimpico di Serravalle is a multi-purpose stadium in Serravalle, San Marino. First opened in 1969, it is currently used mostly for football matches. It is the national stadium of San Marino. 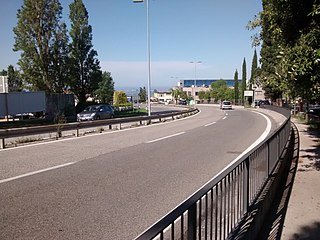 San Marino Highway is a road from the castelli of Borgo Maggiore, to Domagnano, through to Serravalle and then the town of Dogana, where it enters Italy. Part of it was built over the now defunct Rimini-San Marino railway line, which was destroyed during the Battle of Rimini. It is owned by the Sammarinese government.

The 2007–08 Campionato Sammarinese di Calcio season was the twenty-third since its establishment. The regular season started on September 21, 2007 and ended on April 20, 2008. The playoff competition, in which the top three clubs from each girone competed for the national title and qualification for the first qualifying round of the UEFA Champions League next season, started on May 7, 2008 and ended with the final on June 3, 2008. S.S. Murata successfully defended their title for the second time, winning their third straight national title, and winning qualification, beating out Juvenes/Dogana in the final.

The 2008–09 Campionato Sammarinese di Calcio season was the twenty-fourth since its establishment. The season began with the first regular season games on 12 September 2008 and ended with the play-off final on 29 May 2009. 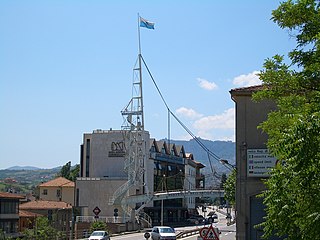 Dogana is a town and a civil parish (curazia), whose name means "Customs House"; it is located in the north-eastern corner of San Marino in the Serravalle municipality ("castello"). The town is the most populated settlement in the republic. 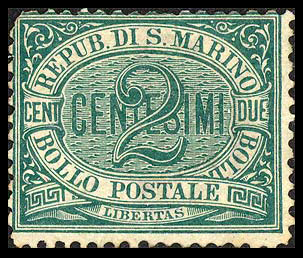 The postal history of San Marino can be traced to October 7, 1607, with the introduction of public postal services. The republic's postal needs were handled by a post office in nearby Rimini, Italy; the first San Marino post office opened in 1833.

The 2009–10 Campionato Sammarinese di Calcio season was the twenty-fifth since its establishment. The season began in September 2009 and ended with the playoff final in May 2010. Tre Fiori were the defending league champions, having won their fifth Sammarinese championship the previous season.

The 2010–11 Campionato Sammarinese di Calcio season was the twenty-sixth since its establishment. The season began with the first regular season games on 17 September 2010 and ended with the play-off final in May 2011. Tre Fiori are the league champions, having won their seventh Sammarinese championship and third-in-a-row last season.

The 2011–12 Campionato Sammarinese di Calcio season was the twenty-seventh since its establishment. The season began with the first regular season games on 17 September 2011 and is scheduled to end with the play-off final in May 2012. Tre Fiori are the defending league champions, having won their seventh Sammarinese championship and third-in-a-row last season. The title was won by S.P. Tre Penne.

The 2012–13 Campionato Sammarinese di Calcio season was the twenty-eighth since its establishment. The league is the uppermost in San Marino, in which the country's top 15 amateur football clubs play. The season began on 14 September 2012 and ended with the play-off final in May 2013. Tre Penne are the defending league champions, having won their first ever Sammarinese championship last season. Tre Penne retained their title, defeating ten-man AC Libertas 5–3 on penalties in a repeat of the previous year's play-off final.

The 2018–19 Campionato Sammarinese di Calcio was the 34th season since its establishment. It is the highest level in San Marino, in which the country's top 15 amateur football clubs played. The season began on 21 September 2018 and concluded with the play-off final on 25 May 2019. La Fiorita were the defending champions from the previous season.