He was born in Hertfordshire, and educated at Sidney Sussex College, Cambridge, where he graduated B.A. in 1636 and M.A. in 1640, becoming a Fellow in that year. [2] [3] [4] In 1643 he was chosen university mathematical lecturer, but he was deprived of his fellowship next year for opposing the Solemn League and Covenant (with Isaac Barrow, John Barwick and Peter Gunning). [2] [4]

In the 1640s, he took instruction in mathematics from William Oughtred, and stayed with relations of Samuel Ward. [4] [5]

In 1649, he became Savilian professor of astronomy at Oxford University, and gained a high reputation by his theory of planetary motion, propounded in the works entitled In Ismaelis Bullialdi astronomiae philolaicae fundamenta inquisitio brevis (Oxford, 1653), against the cosmology of Ismael Boulliau, and Astronomia geometrica (London, 1656) on the system of Kepler. [2] [6] About this time he was engaged in a decades-long philosophical controversy with Thomas Hobbes: [2] [7] Seth Ward and John Wallis, both Savilian professors and members of the Anglican clergy, felt offended by the works of Hobbes, particularly after Leviathan was released. [7] : 273

A small part of the debate with John Webster launched by the Vindiciae academiarum he wrote with John Wilkins which also incorporated an attack on William Dell. [8]

He was one of the original members of the Royal Society of London. In 1659, he was appointed President of Trinity College, Oxford, but not having the statutory qualifications he resigned in 1660. [2]

King Charles II appointed him to the livings of St Lawrence Jewry in London, and Uplowman in Devonshire, in 1661. He also became dean of Exeter Cathedral (1661) and rector of St Breock, Cornwall in 1662. In the latter year he was consecrated Bishop of Exeter, and in 1667 he was translated to the see of Salisbury. The office of Chancellor of the Order of the Garter was conferred on him in 1671. [2]

In his diocese he showed great severity to nonconformists, and rigidly enforced the act prohibiting conventicles (unofficial religious meetings). He spent a great deal of money on the restoration of the cathedrals of Worcester and Salisbury. He died at Knightsbridge on 6 January 1689. [2]

John Wallis was an English clergyman and mathematician who is given partial credit for the development of infinitesimal calculus. Between 1643 and 1689 he served as chief cryptographer for Parliament and, later, the royal court. He is credited with introducing the symbol ∞ to represent the concept of infinity. He similarly used 1/∞ for an infinitesimal. John Wallis was a contemporary of Newton and one of the greatest intellectuals of the early renaissance of mathematics. 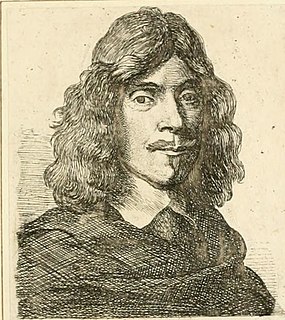 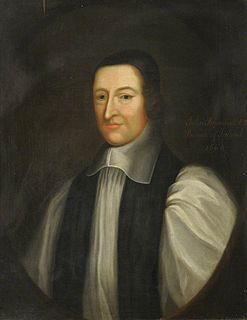 The Hobbes–Wallis controversy was a polemic debate that continued from the mid-1650s well into the 1670s, between the philosopher Thomas Hobbes and the mathematician John Wallis. It was sparked by De corpore, a philosophical work by Hobbes in the general area of physics. The book contained not only a theory of mathematics subordinating it to geometry and geometry to kinematics, but a claimed proof of the squaring of the circle by Hobbes. While Hobbes retracted this particular proof, he returned to the topic with other attempted proofs. A pamphleteering exchange continued for decades. It drew in the newly formed Royal Society, and its experimental philosophy to which Hobbes was opposed.

The position of Savilian Professor of Geometry was established at the University of Oxford in 1619. It was founded by Sir Henry Savile, a mathematician and classical scholar who was Warden of Merton College, Oxford, and Provost of Eton College, reacting to what has been described by one 20th-century mathematician as "the wretched state of mathematical studies in England" at that time. He appointed Henry Briggs as the first professor. Edward Titchmarsh said when applying that he was not prepared to lecture on geometry, and the requirement was removed from the duties of the post to enable his appointment, although the title of the chair was not changed. The two Savilian chairs have been linked with professorial fellowships at New College, Oxford, since the late 19th century. Before then, for over 175 years until the middle of the 19th century, the geometry professors had an official residence adjoining the college in New College Lane.

The Venerable Edward Davenant or D’Avenant, DD (1596–1679) was an English churchman and academic, Archdeacon of Berkshire from 1631 to 1634, known also as a mathematician.

Joshua Childrey (1623–1670) was an English churchman and academic, antiquary and astrologer, the archdeacon of Salisbury from 1664. He was a "country virtuoso", and an avowed Baconian. He also has been considered a dilettante.

Thomas Ward was an Anglican priest: the Archdeacon of Wilts from 1687 until his death.