She was born in Istanbul on September 30, 1936 as the third child of six to Mithat Yenen, an architect-civil servant, and his German wife Anneliese Rupp , who took later the Turkish name Aliye. [1] After completing high school in Ankara, Soysal studied archaeology at Ankara University, but left without graduating. She obtained her degree in the late 1960s. [3] [4] [5]

In 1956, she married poet and translator Özdemir Nutku. She followed her husband to Germany, where she attended lectures on archaeology and theatre at the University of Göttingen. She got returned home. In 1958, she gave birth to a son named Korkut. [4] [5]

Between 1960 and 1961 she worked at the Cultural Center of the German Embassy and Ankara Radio. [2] She acted in a solo role in the theatre play Zafer Madalyası (Turkish version of Bad Day at Black Rock) staged at Ankara Meydan Theatre and directed by Haldun Dormen. In 1965, she married Başar Sabuncu, whom she met during her acting on stage. [4]

After the military coup on March 12, 1971, she was accused of belonging to a left-wing organization and put in prison. During her detention in Ankara's Mamak Prison, she met Mümtaz Soysal, a professor of Constitutional law who was also detained for making communist propaganda. They married in the prison. She gave birth to daughter Defna in December 1973 and to daughter Funda in March 1975. Sevgi Soysal was arrested again for political reasons. She spent eight months in prison, and two and half months in exile in Adana. [4] [5]

Sevgi Soysal was diagnosed with breast cancer, and lost one of her breasts in late 1975. She underwent another breast cancer surgery in September 1976, and went with her husband to London for medical treatment. Returning home, she died in Istanbul on November 22, 1976, at age forty. [4] She was laid to rest in the Zincirlikuyu Cemetery, Istanbul. [5]

In 1962, she published a collection of short stories, Tutkulu Perçem ("Passionate Bangs"). In the same year, she began to work with the Turkish Radio and Television Corporation (TRT). [3] Her 1970 novel Yürümek ("Walking") received the Turkish Radio and Television Corporation Achievement Award but was banned for obscenity. [5] [6]

She wrote under the pen names:

Emine Sevgi Özdamar is a writer, director, and actress of Turkish origin who resides in Germany and has resided there for many years. Özdamar's art is unique in that it is influenced by her life experiences, which straddle the countries of Germany and Turkey throughout times of turmoil in both. One of her most notable accomplishments is winning the 1991 Ingeborg Bachmann Prize.

The Koç family is a Turkish family of business people founded by Vehbi Koç, one of the wealthiest self-made people in Turkey. His grandsons, the third generation of the Koç family, today run Turkey's largest group of companies, Koç Holding, the only Turkish company on the Fortune Global 500 list. In 2016, the family's wealth was estimated at US$8 billion, ranking them as the wealthiest family in Turkey. According to Murat Bardakçı, their lineage can be traced to Hacı Bayram-ı Veli.

Çetin Altan was a Turkish writer, journalist, and a member of parliament. He was considered one of the finest writers in the modern Turkish language of the late 20th century.

The Zincirlikuyu Cemetery is a modern burial ground residing on the European part of Istanbul, Turkey. It is administered by the Metropolitan Municipality. Many prominent figures from the world of politics, business, sports and arts rest here.

Buket Uzuner is a Turkish writer, author of novels, short stories and travelogues. She studied biology and environmental science and has conducted research and presented lectures at universities in Turkey, Norway, the United States, and Finland. Her works have been translated into eight languages, Spanish, English, Italian, Greek, Romanian, Hebrew, Korean, and Bulgarian.

Müfide İlhan was a mayor of Mersin, Turkey in the early 1950s. She is known as being the first woman mayor in Turkey.

Özlem Piltanoğlu Türköne is a Turkish columnist and politician of the Justice and Development Party. She was a member of the Grand National Assembly of Turkey (TBMM) and a member of the Parliamentary Assembly of the Council of Europe (PACE) between 2007 and 2011. She has been a columnist for Zaman and Today's Zaman.

Seyyal Taner is a Turkish singer and actress.

Vahide Perçin is a Turkish actress and television personality. She was credited for a number of years by her married name "Vahide Gördüm", but after divorcing, she went back to her birth name.

Gülsün Karamustafa is a visual artist and filmmaker recognised as "one of Turkey’s most outspoken and celebrated artists." Using personal and historical narratives, Karamustafa explores socio-political issues in modern Turkey and addresses themes including sexuality-gender, exile-ethnicity, and displacement-migration. "Hailed as one of Turkey’s most influential contemporary artists," her work reflects on the traumatic effects of nation building, as it responds to the processes of modernization, political turbulence, and civil rights in a period that includes the military coups of 1960, 1971, and 1980. Karamustafa was one of the laureates of the 2014 Prince Claus Award, a prestigious award presented to "individuals for their outstanding achievements in the field of culture and development and the positive effect of their work on their direct environment and the wider cultural or social field." She lives and works in Istanbul.

Demet Özdemir is a Turkish actress, model and dancer. She is best known for her role as the character "Aylin" in the fantastic drama series Sana Bir Sır Vereceğim. 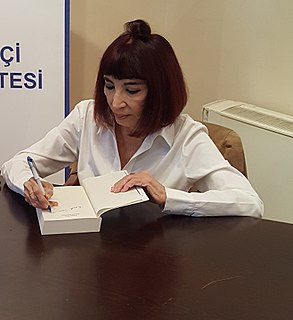 Gülruz Sururi was a Turkish drama actress and author. She presented a TV cooking show and co-owned a theatre.

Cihan Ünal is a Turkish actor.

Oya Başar is a Turkish actress.

Hamiyet Yüceses Sabuncu, best known with her stage name "Hamiyet Yüceses, was a renowned Turkish female singer of Ottoman classical music. She was a readio and music hall singer releasing a great number of records.