Many critics [3] view him as one of the most productive and provocative creative artists to come out of Japan. He has been cited as an influence on various Japanese filmmakers from the 1970s onward. [4]

Terayama was born December 10, 1935, in Hirosaki, Aomori, the only son of Hachiro and Hatsu Terayama. His father died at the end of the Pacific War in Indonesia in September 1945. [4] When Terayama was nine, his mother moved to Kyūshū to work at an American military base, while he himself went to live with relatives in the city of Misawa, also in Aomori. Terayama lived through the Aomori air raids that killed more than 30,000 people.

Terayama entered Aomori High School in 1951 and, in 1954, he enrolled in Waseda University's Faculty of Education to study Japanese language and literature. However, he soon dropped out because he fell ill with nephrotic syndrome. He received his education through working in bars in Shinjuku. By 18, he was the second winner of the Tanka Studies Award.[ citation needed ]

He married Tenjō Sajiki co-founder Kyōko Kujō (九條今日子) on April 2, 1963. Kujō later began an extramarital affair with fellow co-founder Yutaka Higashi. She and Terayama formally divorced in December 1970, although they continued to work together until Terayama's death on May 4, 1983 from cirrhosis of the liver. [5] Kujō died on April 30, 2014.

His oeuvre includes a number of essays claiming that more can be learned about life through boxing and horse racing than by attending school and studying hard. Accordingly, he was one of the central figures of the "runaway" movement in Japan in the late 1960s, as depicted in his book, play, and film Throw Away Your Books, Rally in the Streets! (書を捨てよ、町へ出よう).

In 1967, Terayama formed the Tenjō Sajiki theater troupe, [6] whose name comes from the Japanese translation of the 1945 Marcel Carné film Les Enfants du Paradis and literally translates to "ceiling gallery" (with a meaning similar to the English term "peanut gallery"). The troupe was dedicated to the avant-garde and staged a number of controversial plays tackling social issues from an iconoclastic perspective in unconventional venues, such the streets of Tokyo or private homes. [6] Some major plays include "Bluebeard" (青ひげ), "Yes" (イエス), and "The Crime of Fatso Oyama" (大山デブコの犯罪). Also involved with the theater were artists Aquirax Uno and Tadanori Yokoo, who designed many of the advertisement posters for the group. Musically, he worked closely with experimental composer J.A. Seazer and folk musician Kan Mikami. Playwright Rio Kishida was also part of the company. She viewed Terayama as a mentor, and together they collaborated on Shintokumaru (Poison Boy), The Audience Seats, and Lemmings.

Also in 1967, Terayama started an experimental cinema and gallery called 'Universal Gravitation,' which is still in existence at Misawa as a resource center. The Terayama Shūji Memorial Hall, which has a large collection of his plays, novels, poetry, photography and a great number of his personal effects and relics from his theatre productions, can also be found in Misawa.

In 1997, the Shuji Terayama Museum was opened in Misawa, Aomori, with personal items donated by his mother, Hatsu. [8] The museum was designed by visual artist Kiyoshi Awazu, who had previously collaborated with Terayama. [9] As of 2015, the museum's director is poet Eimei Sasaki, who had previously starred in Throw Away Your Books, Rally in the Streets (1968). [10]

Asahi Shimbun named an award after Terayama with the inauguration of their Asahi Performing Arts Awards in 2001. [11] "The Terayama Shūji Prize is meant to recognize artistic innovation by individuals or organizations who have demonstrated artistic innovation". [12] However, the awards were suspended in 2008. [13]

In March 2012, Tate Modern in London hosted a tribute to Terayama that was attended by Kyōko Kujō and Terayama's assistant director, Henrikku Morisaki. [14] [15]

His film oeuvre is well known for its experimentalism and includes:

Collected in: The Crimson Thread of Abandon

When I Was a Wolf (Boku ga ookami datta koro) 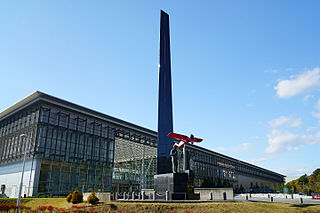 Daidō Moriyama is a Japanese photographer. 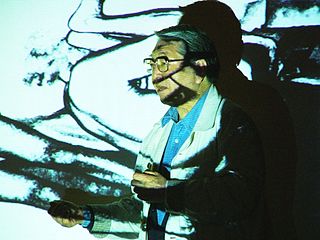 Experimental film, experimental cinema or avant-garde cinema is a mode of filmmaking that rigorously re-evaluates cinematic conventions and explores non-narrative forms and alternatives to traditional narratives or methods of working. Many experimental films, particularly early ones, relate to arts in other disciplines: painting, dance, literature and poetry, or arise from research and development of new technical resources. 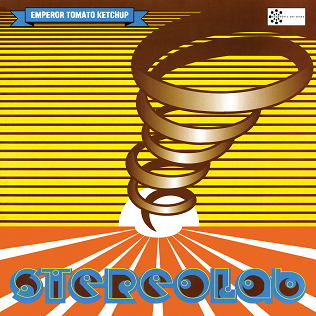 Kan Mikami is a Japanese folk singer-songwriter and actor. His music, heavily influenced by American blues, was popular in Japan in the 1970s. He re-wrote the lyric of the song "Yume wa Yoru Hiraku" for his cover version in 1972, which was banned for its negative portrayal of Modern Japanese Culture. Mikami also acted in cinema and is notable for collaborations with Shūji Terayama and his avant-garde theater Tenjō Sajiki. His autobiography, A Life in Folk, was translated into English and published in 2017 by Public Bath Press of Nara, Japan. 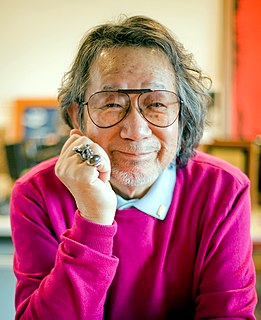 Nobuhiko Obayashi was a Japanese director, screenwriter and editor of films and television advertisements. He began his filmmaking career as a pioneer of Japanese experimental films before transitioning to directing more mainstream media, and his resulting filmography as a director spanned almost 60 years. He is best known as the director of the 1977 horror film House, which has garnered a cult following. He was notable for his distinct surreal filmmaking style, as well as the anti-war themes commonly embedded in his films.

Grass Labyrinth is a Japanese film directed by Shūji Terayama which was released in France in 1979 and in Japan in 1983.

Emperor Tomato Ketchup is a Japanese short experimental film made by Shūji Terayama. A 27-minute cut was released in 1971. A "director's cut" of sorts, attempting to recreate the film as originally made in 1970, was released as a 75-minute feature in 1996, 13 years after Terayama's death.

Emperor Tomato Ketchup may refer to:

Tatsuo Suzuki is a Japanese cinematographer who has worked with many prominent independent directors.

Throw Away Your Books, Rally in the Streets is a 1971 Japanese feature-length experimental drama film directed by Shūji Terayama. A metaphor for Japan's descent into materialism, it follows a young man's disillusionment with the world around him and his determination to achieve something in life while his family members are content with their poor social and economic standing. It was Terayama's first feature-length film.

Carol Fischer Sorgenfrei is a scholar, translator, editor, and playwright who assumes the title of "founding mother" of Asian theater studies for her contributions to the study of cross-cultural performance and her expertise in Asian theatre. She has published extensively on Asian cultural practices and has written plays incorporating elements of traditional Japanese drama. Currently Professor Emeritus at UCLA, Sorgenfrei continues her creative work as a playwright.