Shangganling (Chinese :上甘岭区; pinyin :Shànggānlǐng Qū) is a district of the prefecture-level city of Yichun in Heilongjiang Province, China.

Ostrov is a small village in the Pardubice Region of the Czech Republic. It has 9 inhabitants.

Ulugh Muztagh or Ulugh Muztag and Muztag Feng, is an extremely remote mountain group on the northern Qinghai-Tibetan Plateau. Located on the border between the Tibetan Autonomous Region and Xinjiang Uyghur Autonomous Region, it is part of the main range of the Kunlun Mountains of East-Central Asia. 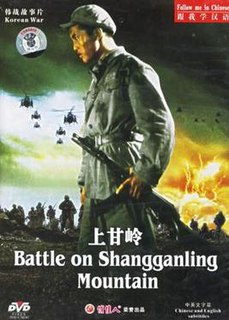 Shangganling is a 1956 Chinese war film, also translated as Battle of Shangganling and Battle on Shangganling Mountain. It depicts the Battle of Triangle Hill during the Korean War which American soldiers recall as especially hard-fought.

The Byzantine and Christian Museum is situated at Vassilissis Sofias Avenue in Athens, Greece. It was founded in 1914, and houses more than 25,000 exhibits with rare collections of pictures, scriptures, frescoes, pottery, fabrics, manuscripts, and copies of artifacts from the 3rd century AD to the Late Middle Ages. It is one of the most important museums in the world in Byzantine Art. In June 2004, in time for its 90th anniversary and the 2004 Athens Olympics, the museum reopened to the public after an extensive renovation and the addition of another wing.

277 Park Avenue is an office building in the Midtown Manhattan neighborhood of New York City. It stands on the east side of Park Avenue between East 47th and 48th Streets; it is 687 feet (209 m) tall, with 50 floors.

Qaraxançallı is a village in the Kalbajar Rayon of Azerbaijan.

Cəngan is a village in the Neftchala Rayon of Azerbaijan. The village forms part of the municipality of Ərəbqardaşbəyli.

Qarabulaq is a village in the Gobustan Rayon of Azerbaijan.

Galați TV Tower is a 150-metre (490 ft) tall concrete tower used for FM and TV broadcasting in Galați, Romania. The tower, completed in 1978, is equipped with a tower restaurant, perhaps the only of this kind in Romania.

Bonin is a village in the administrative district of Gmina Wierzchowo, within Drawsko County, West Pomeranian Voivodeship, in north-western Poland. It lies approximately 6 kilometres (4 mi) north-west of Wierzchowo, 16 km (10 mi) east of Drawsko Pomorskie, and 96 km (60 mi) east of the regional capital Szczecin.

Ždánice is a village and municipality in Kolín District in the Central Bohemian Region of the Czech Republic.

Xilin District is a district of the prefecture-level city of Yichun, Heilongjiang province, China.

The area of Tilleroyes is a small section of Besançon, France, which is located to the north of the city.

Notikewin is a hamlet in northern Alberta, Canada within the County of Northern Lights.

Xiangmi station is a Metro station of Shenzhen Metro Line 2. It opened on 28 June 2011. It is located nearby the Xiangmi Road.

Shahid Mohammadpur is a village in Angut-e Gharbi Rural District, Anguti District, Germi County, Ardabil Province, Iran. At the 2006 census, its population was 352, in 85 families.

The Frenchman Hills are hills in Grant County, Washington, United States of America. The high point is 1,640 feet (500 m). They are an anticlinal fold in the northeastern part of the larger Yakima Fold Belt.