It is best known outside China as the club that developed Yao Ming before he entered the National Basketball Association. With Yao on the team, the Sharks made the finals for three seasons in a row (in 1999–2000, 2000–01, and 2001–02), facing the Bayi Rockets each time. They were runners-up the first two years, but won the CBA championship for the first time on their third try, snapping a string of six Bayi Rockets championships in a row.

The team faced serious financial issues in the 2008–09 season, and were in danger of not being able to compete in the 2009–10 season due to their shaky finances. On July 16, 2009, Chinese media reported that Yao had stepped in to purchase the team. [3]

Yao Ming is a Chinese basketball executive and former professional player. He played for the Shanghai Sharks of the Chinese Basketball Association (CBA) and the Houston Rockets of the National Basketball Association (NBA). Yao was selected to start for the Western Conference in the NBA All-Star Game eight times, and was named to the All-NBA Team five times. During his final season, he was the tallest active player in the NBA, at 2.29 m. He is the only player from outside of the United States to lead the NBA in All-Star votes.

Wang Zhizhi is a Chinese former professional basketball player who is currently the head coach of the Bayi Rockets, the team with which he spent his domestic career in the Chinese Basketball Association (CBA). He also played in the National Basketball Association for the Dallas Mavericks, Los Angeles Clippers, and Miami Heat, becoming China's first player to compete in the NBA. 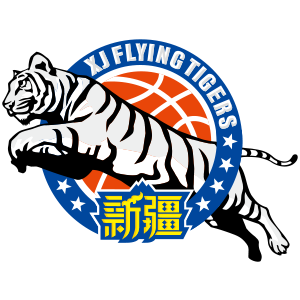 The Xinjiang Guanghui Flying Tigers is a professional basketball team based in Ürümqi, Xinjiang, China. The team play its home games at the Hongshan Arena, which has a capacity for 3,800 spectators. The club joined the Chinese Basketball Association Dvision 2 in the 1999–2000 CBA season, advanced to Division 1A in the 2002–03 season, and had three consecutive Grand Finals appearances in the 2008–09, 2009–10 and 2010–11 seasons. The Flying Tigers won their first Championship in the 2016–17 CBA season, defeating their long-time rival Guangdong Southern Tigers 4–0 in the finals.

The Bayi Rockets was a professional basketball team based in Nanchang, Jiangxi, China, which played in the South Division of the Chinese Basketball Association. 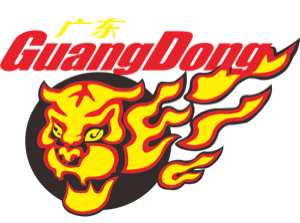 Guangdong Hongyuan Southern Tigers or Guangdong Southern Tigers, also known as Guangdong Dongguan Bank for sponsorship reasons, are a Chinese professional basketball team owned by the Guangdong Winnerway (Hongyuan) Group. The team is one of the best-performing teams in the Chinese Basketball Association (CBA). The Tigers have won eleven CBA titles, more than any other team in the league. They are also the only team to have qualified for the CBA playoffs in every season since the league launched in 1995. The team plays its home games in Dongguan, Guangdong. Occasionally, for marketing purposes, the team plays some of its home games in Zhongshan, Zhuhai, and other cities in the Pearl River Delta.

Shanghai United F.C was a Chinese professional football club based in Shanghai, who last played in the 16,000 seater Yuanshen Sports Centre Stadium in the Chinese Super League. The club was founded by Dalian Shide F.C. on 1 February 2000 and was originally known as Dalian Sidelong. The club was initially used as youth team who were allowed to compete in the Chinese football league pyramid until the club was eventually sold to businessman Zhu Jun, the owner of China's second-largest online gaming company The9 in 2005. He moved the club to Shanghai until 2007 when he bought a majority share of inner-city rivals Shanghai Shenhua, thus began to merge the two clubs. Shanghai United no longer exists in name and is replaced by Shanghai Shenhua.

The 1997–98 CBA season was the third season of the Chinese Basketball Association.

The 1996–97 CBA season was the second season of the Chinese Basketball Association.

Shanghai Shenxin Football Club was a professional football club that participated in China's football league system between 2003 and 2019 under licence from the Chinese Football Association (CFA). The team was based in Jinshan District, Shanghai and their home stadium was the Jinshan Football Stadium that has a seating capacity of 30,000. Their majority shareholder was Chinese real estate company Hengyuan Corporation.

Liu Yudong, is a retired Chinese professional basketball player who last played for the Fujian Xunxing club in the Chinese Basketball Association (CBA). At 2.00 m and 243 lbs. (110 kg), he played at the power forward position. In 1990, he was chosen as one of China's 50 all-time greatest basketball players. He held the CBA record for most career points scored, until it was broken by Zhu Fangyu, on 1/1/2012. He was the CBA Regular Season MVP in 2002, and the CBA League MVP in 2002 and 2003, and is known as one of the greatest Chinese players of all-time.

Bob Donewald Jr. is an American basketball coach who is currently an assistant coach for the Texas Tech Red Raiders. He was an NBA assistant with the New Orleans Hornets and Cleveland Cavaliers from 2001 to 2004, and an ABA head coach from 2004-2005. He is the son of Bob Donewald Sr., a retired American college basketball head coach.

Bilibili, also nicknamed B Site (B站) in China, is a Chinese video sharing website based in Shanghai, themed around animation, comic, and games (ACG), where users can submit, view and add overlaid commentary on videos. Bilibili uses Adobe Flash or HTML5 player, to play user submitted videos hosted by either itself or third-party sources, featuring a scrolling danmu commenting system. Since the mid-2010s, Bilibili began to expand to a broader audience from its original niche market that focused on animation and games, and it has become one of the major Chinese video on demand over-the-top streaming platforms that programs critically acclaimed and popular documentaries, variety shows, and other original programming.

Li Chunjiang is a Chinese basketball player and coach. He was the member of national team and won titles at 1990 Asian Games and the 1991 ABC Championship. In the following year, Li along with the national team competed in the men's tournament at the 1992 Summer Olympics in Barcelona. Three years after announcing his retirement from professional basketball in 1998, he has since launched a distinguished coaching career. 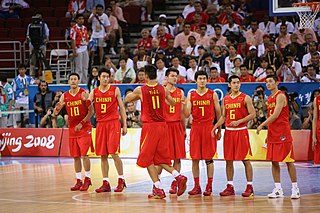 NBA is the most popular sports league in China, edging over the Premier League, UEFA Champions League, FIFA World Cup, La Liga, Serie A, and UEFA European Football Championship as the most popular sports event. The popularity of basketball in China has been supported by the Chinese Basketball Association which hosts professional play in China. In international competition, the Chinese men's national team has won 16 titles of the FIBA Asia Cup between 1975 and 2005 and is the dominant force in Asian basketball. Six Chinese nationals have played in National Basketball Association. The most famous Chinese basketball player is Yao Ming who became the first player to score an average of 20+10 in his freshmen season, an elected member of the Naismith Memorial Basketball Hall of Fame, and the incumbent president of the Chinese Basketball Association.

Guo Haowen, is a Chinese professional basketball player for the Shanghai sharks of the Chinese Basketball Association (CBA). On May 31, 2021, Guo declared for 2021 NBA draft.