Sharana District (Pashto : شرنه ولسوالۍ‎, Persian : ولسوالی شرنه‎) is home to the city of Sharana, which is the capital of Paktika Province, Afghanistan. The Paktika Governor's compound is in Sharana, attached to the police headquarters for the province. The district is within the heartland of the Sulaimankhel tribe of Ghilji Pashtuns. [1] The estimated population in 2019 was 63,626. [2]

The small city of Sharana is located a mere five minutes walk from the Governor's compound. There was no single concrete government department or an office as well as no concrete markets till the end of 2006. By the end of the 2007 few government departments were built and by the end of 2008 some new concrete markets in Sharana bazaar were also built which changed the shape of Sharana bazaar. Some roads to the bordering districts have been also paved and are still going to be paved. Sharana is almost 50 – 60 km away from Ghazni provincial centre which takes normally one hour due to damage of some bridges and culverts by the Taliban and Haqqani Network. The population of Sharana is mostly composed of Pashtun, followed by minorities Hazara and Tajiks.

The Provincial Reconstruction Team base named Camp Kearney is located a five-minute drive east of the Governor's compound on the way to Urgun district which is another major city of Paktika province.

There is also an Afghan National Army base, called FOB Rushmore, located just outside the Governor's compound in Sharana.

Sharana, is the capital of Paktika Province, Afghanistan. It is located at an altitude of 2,200 meters. Its population was estimated to be 2,200 in 2006. The city of Sharana has a population of 15,651 and is located within the heartland of the Sulaimankhel tribe of Ghilji Pashtuns. It has 6 districts and a total land area of 5,893 hectares. The total number of dwellings in this city are 1,739. 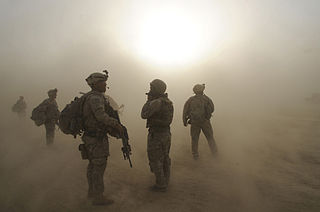 Dila District is a district of Paktika Province, Afghanistan. The district is within the heartland of the Sulaimankhel tribe of Ghilji Pashtuns. 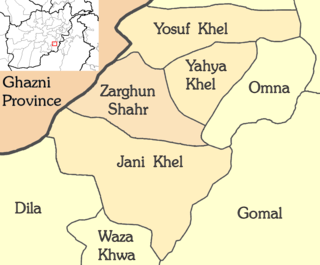 Urgun is the main town of the Urgun District of Paktika Province, Afghanistan. With an estimated population of 10,665, Urgun is the largest city of Paktika, while Urgun District, with a population of 89,718, is also the most populous district of the province. Urgun historically used to be the capital of Paktika, but in the 1970s, the capital was shifted from Urgun to Sharana in the west because Urgun was not easily accessible from the main Kabul–Kandahar Highway.