Shelley Niro RCA (born 1954) is a Mohawk filmmaker and visual artist from New York and Ontario. [1] She is known for her photographs using herself and female family members cast in contemporary positions to challenge the stereotypes and clichés of Native American women. [2]

A multidisciplinary contemporary artist skilled in photography, painting, sculpting, beadwork, multimedia, and independent film, Niro is a member of the Turtle clan of the Kanienkehaka (Mohawk Nation) from Six Nations of the Grand River. [3] [4]

Shelley Niro was born in Niagara Falls, New York in 1954 and grew up on the Six Nations of the Grand River Reserve, near Brantford, Ontario, Canada. [5]

Niro's home life made it easy for creativity to flourish while entertaining her siblings through songs, storytelling, and picture drawing. Niro's family had a big impact on her work, and would later make appearances in various compositions.

Niro's artistic ambitions began with her earning a diploma in performing arts from Cambrian College in Sudbury, Ontario, in 1972. In 1990, she received an honors fine arts degree in painting and sculpture from Ontario College of Art. [5] Niro went on to earn a master of fine arts from the University of Western Ontario in 1997. [1] In 2000, Niro attended the Banff Centre for the Arts to study film. [5]

Niro explored the oral history of the Haudenosaunee people in general and the diaspora of Mohawk people in particular. [6] She is known for her photography, [7] which often combines portraits of living Native women with customary Mohawk imagery. She uses herself, friends, and family members as models. Her 1992 photographic series, This Land Is Mime Land and 500 Year Itch employ humorous pop culture references, such as Elvis Presley and Marilyn Monroe. [8] Niro often works in diptychs and triptychs, using photographic processes such as photo montage, hand tints, and sepia tones. [2]

Shelly Niro is often compared to the artist Cindy Sherman because they both cast themselves in different roles in an attempt to break down various stereotypes. Niro, however, never fully disguises herself. "She wants the viewer to recognize her within her manifestations." [2]

As her skills advanced, Niro would feature family members in her art pieces. Her piece Time Travels Through Us shows her mother and two of her sisters as a way to represent the social, cultural, and personal values passed from generation to generation. The colors purple and silver reference Iroquois aesthetics and culture. A turtle represents Niro's spirit animal, as well as being a reference to the Turtle Clan of which she is a member. [5]

Most of Niro's work is conceptual, touching on themes of gender imbalance, cultural appropriation, and the importance of cultural influences. She uses the immersion of different mediums to engage her audience with her perspective. In spite of the serious themes such as cultural loss and oppression, some of Niro's pieces have used humor and satire as a form of resistance to convey social misconceptions about her culture while poking fun at outdated stereotypes and ideas. [5] [9]

Shelley Niro currently resides in Brantford, Ontario, with her husband. [5] [3]

Niro's first film was It Starts With a Whisper, which she co-directed with Anna Gronau in 1992. Other films include:

1992, Niro directed her first short film “It Starts With a Whisper” with co-director Anna Gronau. In this film, Niro wanted to discuss the issues of gender, Native identity, and colonialism. Niro was able to showcase her unconventional narrative and performance elements using satire, burlesque, and music tracing back to her heritage to convey her perspective as a Native American. [1]

1997, Niro directed the film “Overweight With Crooked Teeth” which was meant to poke fun at the common misconceptions and stereotypes of the “Aboriginal Warrior”. In most of her works, Niro likes to play with masquerade, parody, and appropriation while calling out inconsistencies. [5]

2003, Niro's film “The Shirt”, featuring actor Hulleah Tsinhnahjinnie, was exhibited in the Venice Biennale along with her photography pieces, and was later presented in the 2004 Sundance Film Festival in Park City, Utah. [1] [5]

At the 2007 Venice Biennale, Niro's film “Tree” was paired alongside performance art by fellow Native artist, Lori Blondeau, for the Requickening Project, which represents long term collaborations between the indigenous peoples of the Americas and the city of Venice. [1] [13]

2009, with support of Telefilm Canada, Niro was able to direct and produce her first film, “Kissed By Lightning” starring Kateri Walker and Eric Schweig about a Mohawk painter in a state of grief. The film premiered at the imagineNATIVE Film + Media Arts Festival, and went on to win the Santa Fe Film Festival's 2009 “Milagro Award for Best Indigenous Film”. [1]

The National Museum of American History named Niro a fellow in 1997. She won the Walking in Beauty Award for her 1992 production It Starts With a Whisper. [1] The film Honey Moccasin won Best Experimental Work at the Dreamspeakers Festival in Edmonton, Alberta and Best Feature, Best Actress, Best Actor, and Best Director at the Red Earth Festival in Oklahoma City, Oklahoma. [6] She was made a member of the Royal Canadian Academy of Arts. [14] Her short film The Shirt was presented at the 2003 Venice Biennale and the 2004 Sundance Film Festival in Park City, UT. [15] Niro was awarded a Governor General's Award in Visual and Media Arts in 2017. [16]

Niro's art has been featured in several exhibitions and museums across Canada and the United States, including the National Museum of the American Indian (NMAI). Her artistic achievements have also earned Niro fellowships and residencies at major educational and cultural institutions, and the honor of being “Guest Selector” for the NMAI's “Native American Film + Video Festival”. [1]

Niro participated in prominent exhibitions at the Venice Biennale. In 2003, Niro was the exhibition artist for the Indigenous Arts Action Alliance (IA3) showcasing her photography work, as well as her short film “The Shirt” which was later screened at the 2004 Sundance Film Festival. [1]

Niro received two awards for the film “Honey Moccasin” which she directed in 1998. This film won “Best Experimental Work” at the Dreamspeakers Festival in Edmonton, and “Best Feature” at the Red Earth Film Festival in Oklahoma. [1]

In 2009, Niro received the “Milagro Award for Best Indigenous Film” for “Kissed by Lightning” at the Santa Fe Film Festival. [1]

She won the Scotiabank Photography Award in 2017. [17] In 2020, she was awarded the Paul de Hueck and Norman Walford Career Achievement Award for Art Photography for outstanding achievement in the field of photography. [18]

"Some people think that to be Indian, you have to do certain things, but I'm saying that you're Indian no matter what you do, but you have to decide what you want to do and you have to ask questions, like, am I doing something because it's expected of me to do, or am I doing it because I really believe this and it's really a part of me. So I'm always questioning that, saying, "Am I being truthful to myself? How much a part of what I do is part of my psychology?" —Shelley Niro

Eija-Liisa Ahtila is a contemporary visual artist and filmmaker who lives and works in Helsinki. 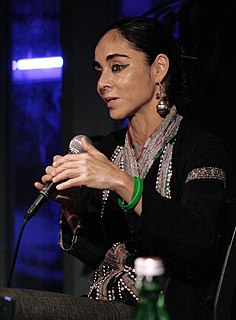 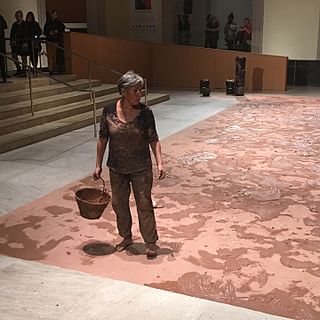 Emily Jacir is a Palestinian artist and filmmaker.

Shirley Cheechoo is a Canadian Cree actress, writer, producer, director, and visual artist, best known for her solo-voice or monodrama play Path With No Moccasins, as well as her work with De-Ba-Jeh-Mu-Jig theatre group. Her first break came in 1985 when she was cast on the CBC's first nations TV series Spirit Bay, and later, in 1997, she found a role on the CBC's TV series The Rez. 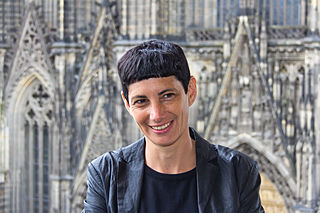 Yael Bartana is an Israeli artist, filmmaker and photographer, whose past works have encompassed multiple mediums, including photography, film, video, sound, and installation. Many of her pieces feature political or feminist themes.

Tracey Penelope Tekahentakwa Deer is a screenwriter, film director and newspaper publisher based in Kahnawake, Quebec. Deer has written and directed several award-winning documentaries for Rezolution Pictures, an Aboriginal-run film and television production company. In 2008 she was the first Mohawk woman to win a Gemini Award, for her documentary Club Native. Her TV series Mohawk Girls had five seasons from 2014 to 2017. She also founded her own production company for independent short work.

Raymonde April, is a Canadian contemporary artist, photographer and academic. April lives in Montreal where she teaches photography at Concordia University. Her work has been shown regularly in museums and galleries in Canada and Europe. Her photographs have also been featured in various publications and awarded the Prix du Québec.

Jane Jin Kaisen is a visual artist and filmmaker based in Copenhagen, Denmark.

Carol Wainio is a Canadian painter. Her work, known for its visual complexity and monochrome color palette, has been exhibited in major art galleries in Canada, the U.S., Europe and China. She has won multiple awards, including the Governor General's Award in Visual and Media Arts.

Loretta Sarah Todd is a Canadian Indigenous film director. Her first dramatic feature, Monkey Beach is based on the iconic novel by Eden Robinson, recently launched to strong audience and critical response, screening at TIFF Industry Selects, opening the Vancouver International Film Festival and sweeping the Drama awards at the American Indian and Red Nation Film Festivals in the USA, including Best Film and Best Director. With international awards adding up, Monkey Beach was the #1 Canadian film for 4 weeks at Cineplex and Landmark Theatres. 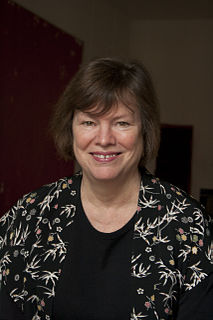 Peggy Gale is an independent Canadian curator, writer, and editor. Gale studied Art History and received her Honours Bachelor of Arts degree in Art History from the University of Toronto in 1967. Gale has published extensively on time-based works by contemporary artists in numerous magazines and exhibition catalogues. She was editor of Artists Talk 1969-1977, from The Press of the Nova Scotia College of Art and Design, Halifax (2004) and in 2006, she was awarded the Governor General's Award in Visual and Media Arts. Gale was the co-curator for Archival Dialogues: Reading the Black Star Collection in 2012 and later for the Biennale de Montréal 2014, L’avenir , at the Musée d’art contemporain de Montréal. Gale is a member of IKT, AICA, The Writers' Union of Canada, and has been a contributing editor of Canadian Art since 1986.

Skawennati is a Mohawk multimedia artist, best known for her online works as well as Machinima that explore contemporary Indigenous cultures, and what Indigenous life might look like in futures inspired by science fiction. She served as the 2019 Indigenous Knowledge Holder at McGill University. In 2011, she was awarded an Eiteljorg Contemporary Art Fellowship which recognized her as one of "the best and most relevant native artists."

Rosalie Favell is a Métis (Cree/British) artist from Winnipeg, Manitoba currently based in Ottawa, Ontario, working with photography and digital collage techniques. Favell creates self-portraits, sometimes featuring her own image and other times featuring imagery that represents her, often making use of archival photos of family members and images from pop culture.

Santee Smith is a Kahnyen’kehàka (Mohawk) multidisciplinary artist, dancer, designer, producer, and choreographer of the Turtle Clan from Six Nations of the Grand River. She has used her voice and research to create dance works representing Indigenous identities. She is an advocate for Indigenous performances and is one of Canada's most dominating dance artists. Santee Smith has amassed many awards throghout her career and in 2019, she was appointed Chancellor of McMaster University in Hamilton, Ontario, Canada.