Sherborne Castle is a 16th-century Tudor mansion southeast of Sherborne in Dorset, England, within the parish of Castleton. It stands in a 1,200-acre (490 ha) park which formed a small part of the 15,000-acre (61 km2) Digby estate.

After passing through Sherborne on the way to Plymouth, Sir Walter Raleigh fell in love with the castle, and Queen Elizabeth relinquished the estate, leasing it to Raleigh in 1592. [2] Rather than refurbish the old castle, Raleigh decided to construct a new lodging for temporary visits, in the compact form for secondary habitations of the nobility and gentry, often architecturally sophisticated, that was known as a lodge. The new house, Sherborne Lodge, was a four-storey, rectangular building completed in 1594. The antiquary John Aubrey remembered it as "a delicate Lodge in the park, of Brick, not big, but very convenient for its bignes, a place to retire from the Court in summer time, and to contemplate, etc." [3] It had four polygonal corner turrets with angled masonry as if they were to serve for military defence, which Nicholas Cooper suggests "may be an obeisance to the old building". [4] Its most progressive feature for its date was the entrance, disguised in one of the corner towers so as not to spoil the apparent symmetry of the facade, which was centred on a rectangular forecourt. The entrance vestibule also contained a winder stairwell and gave directly on the hall.

During Raleigh's imprisonment in the Tower, King James leased the estate to Robert Carr and then sold it to Sir John Digby, 1st Earl of Bristol in 1617. In the 1620s, the Digby family, in order to suit the lodge to a more permanent seat, added four wings to the house in an architectural style similar to the original, retaining the original corner towers.

In the Civil War, Sherborne was strongly Royalist, with the castle now owned by Lord Digby, an advisor to the king. The castle was captured by Parliamentarians in September 1642, and recaptured in February 1643. [5] In early August 1645, a New Model Army force under Sir Thomas Fairfax laid siege to the castle, then occupied by a Royalist garrison commanded by Sir Lewis Dyve. Following heavy bombardment and mining, Dyve surrendered the Castle on 17 August 1645. [6] The castle was slighted in October 1645 and left in ruins. [5]

The name "Sherborne Castle" was then applied to the new house, though today the term Sherborne New Castle is generally used to refer to it, in the same manner as "Sherborne Old Castle" is used for the ruins.

Through the early and mid-18th century William, 5th Lord Digby, [7] who laid out the grounds praised by Alexander Pope, and his heirs Edward, 6th Lord Digby, who inherited in 1752, and Henry, 7th Lord, created Earl Digby, laid out the present castle gardens. Features include the 1753 lake designed by Capability Brown, which separates the old and new castles. [8] The ruins of the old castle are part of the gardens, being conspicuous amongst the trees across the lake. King George III visited the house and gardens in 1789, shortly before awarding Henry Digby with a peerage. When Edward, 2nd and last Earl Digby, died in 1856 the house was passed to the Wingfield Digby family, who still own the house. The house was modernised by the architect Philip Charles Hardwick.

In the First World War the house was used by the Red Cross as a hospital and in the Second World War as the headquarters for the commandos involved in the D-Day landings.

The gardens are Grade I listed in the National Register of Historic Parks and Gardens. [14]

The gardens are open to the public much of the year, and the house is open to the public most Saturdays. The estate often hosts special events, such as concerts and firework displays. The old castle was leased by English Heritage and is now separate from the rest of the estate.

Glamis Castle is situated beside the village of Glamis in Angus, Scotland. It is the home of the Earl and Countess of Strathmore and Kinghorne, and is open to the public. 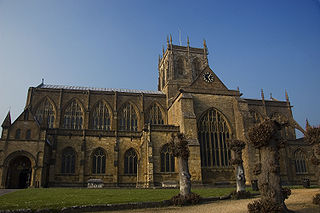 Minterne Magna is a village and civil parish in Dorset, England, situated midway between Dorchester and Sherborne. In the 2011 census the parish had a population of 184. The village is sited near the source of the River Cerne among the chalk hills of the Dorset Downs. Some of the highest points in Dorset, including Telegraph Hill (267 m) and Dogbury Hill (248 m), are nearby. 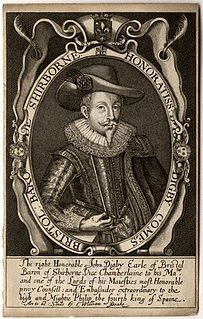 John Digby, 1st Earl of Bristol, was an English diplomat and a moderate royalist during the English Civil War.

Belgrave Square is a large, grandiose architecture 19th-century garden square in London. It is the centrepiece of Belgravia and its architecture resembles the original scheme of property contractor Thomas Cubitt who engaged George Basevi for all of the terraces for the 2nd Earl Grosvenor, later the 1st Marquess of Westminster, in the 1820s. Most of the houses were occupied by 1840. The square takes its name from one of the Duke of Westminster's subsidiary titles, Viscount Belgrave. The village and former manor house of Belgrave, Cheshire were among the rural landholdings associated with the main home and gardens of the senior branch of the family, Eaton Hall. Today, many embassies occupy buildings on all four sides.

Wressle Castle is a ruined palace-fortress in the East Riding of Yorkshire, England, built for Thomas Percy in the 1390s. It is privately owned and not open to the public. Wressle Castle originally consisted of four ranges built around a central courtyard; there was a tower at each corner, and the structure was entered through a gatehouse in the east wall, facing the village.

Abberley Hall is a country house in the north-west of the county of Worcestershire, England. The present Italianate house is the work of Samuel Daukes and dates from 1846–49. Since 1916 it has been occupied by Abberley Hall School. It is a Grade II* listed building. The gardens are listed as Grade II on the English Heritage Register of Parks and Gardens of Special Historic Interest in England. In the area close to Stourport-on-Severn there are several large manor and country houses, among which Witley Court, Astley Hall, Pool House, Areley Hall, Hartlebury and Abberley Hall are particularly significant. 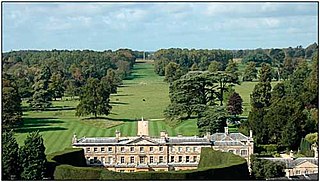 Cirencester Park is a country house in the parish of Cirencester in Gloucestershire, England, and is the seat of the Bathurst family, Earls Bathurst. It is a Grade II* listed building. The gardens are Grade I listed on the Register of Historic Parks and Gardens. 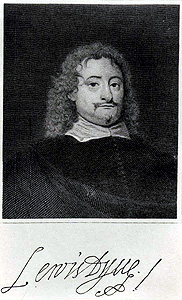 Sir Lewis Dyve (1599–1669) was an English Member of Parliament and a Royalist adherent during the English Civil War. His surname is sometimes also spelt Dive or Dives. 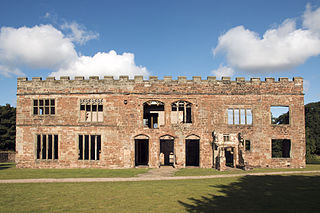 Astley Castle is a ruinous moated fortified 16th century manor house in North Warwickshire. It has been listed as a Grade II* listed building since 1952 and as a Scheduled Ancient Monument since 1994. It was derelict and neglected since it was severely damaged by fire in 1978 whilst in use as a hotel and was officially a Building at Risk. The building reopened as a holiday let in 2012 after extensive and novel renovations that combine modern elements within the (mostly) renaissance remains.

Redlynch is a village and former manor in the civil parish of Bruton within the South Somerset district of Somerset, England. 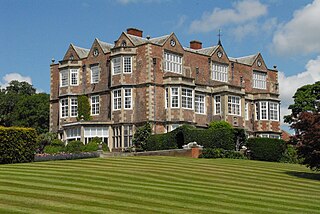 Goldsborough Hall is a Jacobean stately home located in the village of Goldsborough, North Yorkshire, England. It is a member of the Historic Houses Association. The house itself is a Grade II* listed building. The Hall was built for Sir Richard Hutton (1560–1639) after he acquired the Goldsborough Estate in 1598, and in the 20th century it was home to Princess Mary, Countess of Harewood as her first family home.

Sherborne House is a large house in the village of Sherborne, Gloucestershire, England. It is a former country house that has been converted into flats and has been designated by English Heritage as a Grade II* listed building. 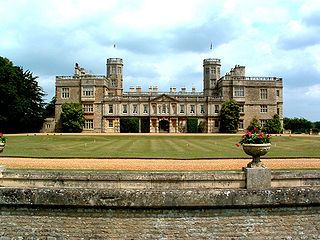 Castle Ashby House is a country house at Castle Ashby, Northamptonshire, England. It is one of the seats of the Marquess of Northampton. The house, church, formal gardens and landscaped park are Grade I listed. 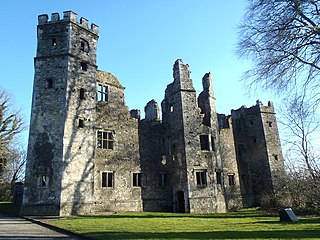