Born in Winton, North Carolina, Jones played from 1960 to 1962 for the San Francisco Giants, Cincinnati Reds and New York Mets. He appeared Game 5 of the 1961 World Series for the Reds against the New York Yankees, retiring Clete Boyer and Bud Daley, the only two Yankees he faced. Jones posted a career record of two wins and six losses, with four saves, 53 strikeouts and a 4.73 earned run average in 48 games. His 12-year pro career extended from 1953–58 and 1960–65.

After leaving baseball, he served in the Kansas City Police Department for 22 years. Jones was later elected to the Kansas Legislature from Wyandotte County, serving in the House of Representatives from 1989 to 1992 and in the Senate until 2001. He died at age 72 at the University of Kansas Medical Center.

Ralph Willard Terry is an American former right-handed pitcher in Major League Baseball. In the 1960 World Series, he gave up the walk-off home run to Bill Mazeroski that won the series for the Pittsburgh Pirates.

Robert Anton Grim was a pitcher in Major League Baseball. 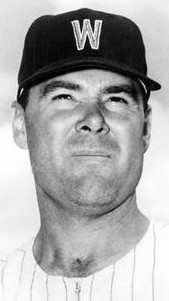 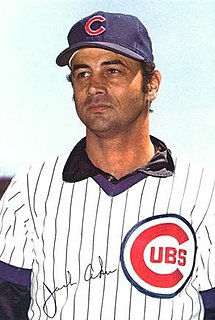 Michael Scott Bankhead is a former Major League Baseball pitcher who played in the major leagues from 1986-1995. Bankhead also pitched for Team USA in the 1984 Olympic Games. He attended the University of North Carolina 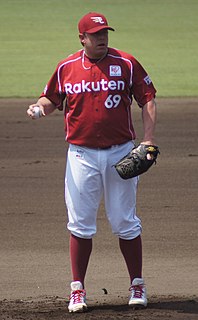 Brandon J. Duckworth is an American former professional baseball pitcher, who is currently a scout. He played in Major League Baseball (MLB) for the Philadelphia Phillies, Houston Astros, and Kansas City Royals, and in Nippon Professional Baseball (NPB) for the Tohoku Rakuten Golden Eagles. Since 2014, Duckworth has worked for the New York Yankees professional scouting department.

Harold Wayne Smith was an American professional baseball player who appeared in 879 games in Major League Baseball from 1955 to 1964 as a utilityman — a catcher, third baseman and first baseman. Smith played with five different MLB teams but is most notable for his integral role during the 1960 World Series as a member of the Pittsburgh Pirates. 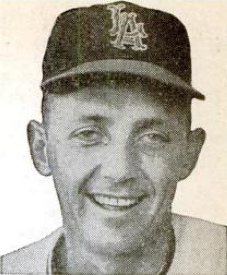 The 1960 New York Yankees season was the 58th season for the team in New York, and its 60th season overall. The team finished with a record of 97–57, winning its 25th pennant, finishing 8 games ahead of the Baltimore Orioles. New York was managed by Casey Stengel. The Yankees played their home games at Yankee Stadium. In the World Series, they were defeated by the Pittsburgh Pirates in seven games.

The 1972 New York Yankees season was the 70th season for the Yankees in New York, and the 72nd season overall. The team finished with a record of 79–76, finishing 6½ games behind the Detroit Tigers. New York was managed by Ralph Houk. The Yankees played at Yankee Stadium.

The 1977 New York Yankees season was the 75th season for the Yankees in New York and the 77th season overall for the franchise. The team won the World Series, which was the 21st championship in franchise history and the first championship under the ownership of George Steinbrenner. The season was brought to life years later in the book, turned drama-documentary, The Bronx is Burning.

The New York Yankees' 1983 season was the 81st season for the Yankees. The team finished in third place in the American League Eastern Division with a record of 91-71, finishing 7 games behind the Baltimore Orioles. New York was managed by Billy Martin. The Yankees played their home games at Yankee Stadium.

The 1961 Cincinnati Reds season was a season in American baseball. It consisted of the Reds winning the National League pennant with a 93–61 record, four games ahead of the runner-up Los Angeles Dodgers, but losing the World Series in five games to the New York Yankees. The Reds were managed by Fred Hutchinson, and played their home games at Crosley Field. The Reds were also the last team to win the National League in the 154-game schedule era, before going to a 162-game schedule a year later.

Charles William "Butch" Wensloff was an American right-handed pitcher in Major League Baseball who played for three seasons in the American League with the New York Yankees and Cleveland Indians. In 41 career games, Wensloff pitched ​276 2⁄3 innings and posted a win-loss record of 16–13 and a 2.60 earned run average (ERA). 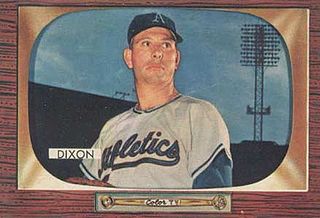 Chance Adams is an American professional baseball pitcher in the Kansas City Royals organization of Major League Baseball (MLB). He has played in MLB for the New York Yankees.