Last updated September 11, 2021
Chinese researcher at the Wuhan Institute of Virology
In this Chinese name, the family name is Shi .

Shi Zhengli (simplified Chinese :石正丽; traditional Chinese :石正麗; born 26 May 1964) is a Chinese virologist who researches SARS-like coronaviruses of bat origin. Shi directs the Center for Emerging Infectious Diseases at the Wuhan Institute of Virology (WIV). In 2017, Shi and her colleague Cui Jie discovered that the SARS coronavirus likely originated in a population of cave-dwelling horseshoe bats in Xiyang Yi Ethnic Township, Yunnan. [1] She came to prominence in the popular press as "Batwoman" during the COVID-19 pandemic for her work with bat coronaviruses. [2] Shi was included in Time magazine's 100 Most Influential People of 2020. [3]

Shi was born in May 1964 in Xixia County, Henan. [4] She graduated from Wuhan University in 1987 with a bachelor's degree in genetics. [5] She received her master's degree from the Wuhan Institute of Virology of the Chinese Academy of Sciences (CAS) in 1990, and she received her PhD at the Montpellier 2 University in France in 2000, where she gained fluency in French. [6] [7]

In 2005, Shi Zhengli and colleagues found that bats are the natural reservoir of SARS-like coronaviruses. [8] [9] [10] In 2008 Shi led a research team which studied binding of spike proteins of both natural and chimaeric SARS-like coronaviruses to ACE2 receptors in human, civet and horseshoe bat cells, to determine the mechanism by which SARS may have spilled over into humans. [11] [12] In 2015, Shi Zhengli published a paper led by Ralph S Baric of the University of North Carolina, which showed that that SARS had the potential to re-emerge from coronaviruses circulating in bat populations in the wild. [13] Shi and her colleague Cui Jie led a team which sampled thousands of horseshoe bats throughout China. In 2017, they published their findings, indicating that all the genetic components of the SARS coronavirus existed in a bat population in Xiyang Yi Ethnic Township, Yunnan. [1] While no single bat harbored the exact strain of virus which caused the 2002-2004 SARS outbreak, genetic analysis showed that different strains often mix, suggesting that the human version likely emerged from a combination of the strains present in the bat population. [1] Zhengli's discoveries on the origin of SARS earned her international recognition. [14]

Shi is the director of the Center for Emerging Infectious Diseases at the Wuhan Institute of Virology (WIV), located in Jiangxia District, Wuhan. [15] On her resume, Shi mentioned receiving grant funding from U.S. government sources totaling more than US$1.2 million, including $665,000 from the National Institutes of Health from 2014 to 2019, as well as US$559,500 over the same period from USAID. [16]

During the COVID-19 pandemic, Shi and other institute scientists formed an expert group to research Severe acute respiratory syndrome coronavirus 2 (SARS-CoV-2). [17] [18] In February 2020, researchers led by Shi Zhengli published an article in Nature titled, "A pneumonia outbreak associated with a new coronavirus of probable bat origin", finding that SARS-CoV-2 is in the same family as SARS, and that it has 96.2% genome overlap with the most closely related known coronavirus, RaTG13. [19] In February 2020, her team published a paper in Cell Research showing that remdesivir and chloroquine inhibited the virus in vitro, and applied for a patent for the drug in China on behalf of the WIV. [20] [21] [22] This caused conflict with an American pharmaceutical firm that had also applied for a patent. [23] Shi co-authored a paper labelling the virus as the first Disease X. [24]

In February 2020, the South China Morning Post reported that Shi's decade-long work to build up one of the world's largest databases of bat-related viruses gave the scientific community a "head start" in understanding the virus. [25] The SCMP also reported that Shi was the focus of personal attacks in Chinese social media who claimed the WIV was the source of the virus, leading Shi to strongly affirm that the outbreak "has nothing to do with the lab." [25] In a March 2020 interview with Scientific American , where she was called China's "Bat Woman", [26] Shi said "Bat-borne coronaviruses will cause more outbreaks", and "We must find them before they find us." [2] In June 2021 the New York Times said that her research on coronaviruses at a state lab in Wuhan, had put her at the center of an outburst of feelings regarding the pandemic. [27] Leading virologists have explained that SARS-CoV-2 is most likely of natural origin, and that it is extremely unlikely that it leaked from a lab. [28] [29] Shi's colleague Peter Daszak of the EcoHealth Alliance, [30] which studies emerging infectious diseases, has noted estimates that 1–7 million people in Southeast Asia who live or work in proximity to bats are infected each year with bat coronaviruses. [28] [29] On July 31 Science Magazine published an interview with Shi in which she commented "to date, there is zero infection of all staff and students in our institute." [31] Asked by Science why the WIV conducts coronavirus experiments in BSL-4 labs when most other scientists work with coronaviruses BSL-2 or BSL-3 conditions, Shi explained that her group also used BSL-2 and BSL-3 laboratories for their coronavirus research, but that they had begun to use BSL-4 laboratories per government regulations after the pandemic. [32] [33] [31]

Shi is a member of the Virology Committee of the Chinese Society for Microbiology. She is editor-in-chief of Virologica Sinica, [34] the Chinese Journal of Virology, and the Journal of Fishery Sciences of China. 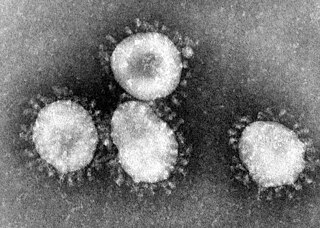 Severe acute respiratory syndrome–related coronavirus is a species of virus consisting of many known strains phylogenetically related to severe acute respiratory syndrome coronavirus 1 (SARS-CoV-1) that have been shown to possess the capability to infect humans, bats, and certain other mammals. These enveloped, positive-sense single-stranded RNA viruses enter host cells by binding to the angiotensin-converting enzyme 2 (ACE2) receptor. The SARSr-CoV species is a member of the genus Betacoronavirus and of the subgenus Sarbecovirus.

The Chinese Center for Disease Control and Prevention is an independent agency of the National Health Commission, based in Beijing, China. Established in 1983, it works to protect public health and safety by providing information to enhance health decisions, and to promote health through partnerships with provincial health departments and other organizations. The CCDC focuses national attention on developing and applying disease prevention and control, environmental health, occupational safety and health, health promotion, prevention and education activities designed to improve the health of the people of the People's Republic of China. 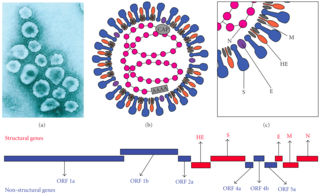 Guan Yi is a Chinese virologist. In 2014, he was ranked as 11th in the world by Thomson Reuters among global researchers in the field of microbiology. He obtained his PhD in microbiology at the University of Hong Kong and is now a professor of microbiology at his alma mater. His research on the viral respiratory disease SARS helped the Chinese government avert the 2004 outbreak of this disease. He is the current director of the State Key Laboratory for Emerging Infectious Diseases University of Hong Kong. In early 2017, Guan warned that the H7N9 influenza virus "poses the greatest threat to humanity than any other in the past 100 years."

Tian Bo was a Chinese virologist and professor at the School of Life Sciences, Wuhan University. 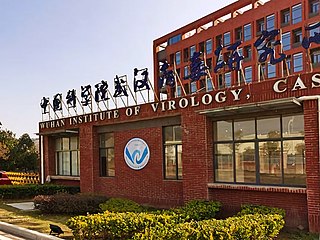 The Wuhan Institute of Virology, Chinese Academy of Sciences is a research institute on virology administered by the Chinese Academy of Sciences (CAS), which reports to the State Council of the People's Republic of China. The institute is one of nine independent organisations in the Wuhan Branch of the CAS. Located in Jiangxia District, Wuhan, Hubei, it opened mainland China's first biosafety level 4 (BSL-4) laboratory. The institute has collaborated with the Galveston National Laboratory in the United States, the Centre International de Recherche en Infectiologie in France, and the National Microbiology Laboratory in Canada. The institute has been an active premier research center for the study of coronaviruses.

Wang Yanyi, is a Chinese immunologist. In 2018, she became the director general at the Wuhan Institute of Virology and the deputy director for Wuhan in the China Zhi Gong Party.

Peter Daszak is a British zoologist, consultant and public expert on disease ecology, in particular on zoonosis. He is the president of EcoHealth Alliance, a nonprofit non-governmental organization that supports various programs on global health and pandemic prevention. He is also a member of the Center for Infection and Immunity at the Columbia University Mailman School of Public Health. Daszak was involved in investigations into the initial outbreak which eventually developed into the COVID-19 pandemic and became a member of the World Health Organization team sent to investigate the origin of COVID-19 in China.

Li-Meng Yan or Yan Limeng is a Chinese virologist, known for publications and interviews alleging that SARS-CoV-2 was made in a Chinese government laboratory. These publications have been widely criticised by the scientific community.

Bat coronavirus RaTG13 is a SARS-like betacoronavirus that infects the horseshoe bat Rhinolophus affinis. It was discovered in 2013 in bat droppings from a mining cave near the town of Tongguan in Mojiang county in Yunnan, China. As of 2020, it is the closest known relative of SARS-CoV-2, the virus that causes COVID-19.

There are several ongoing efforts by scientists, governments, international organisations, and others to determine the origin of SARS-CoV-2, the virus responsible for the COVID-19 pandemic. Most scientists say that as with other pandemics in human history, the virus is likely of zoonotic origin in a natural setting, and ultimately originated from a bat-borne virus. Several other explanations, including many conspiracy theories, have been proposed about the origins of the virus.

The COVID-19 lab leak theory proposes that SARS-CoV-2 escaped from a laboratory in Wuhan, China, resulting in the COVID-19 pandemic. The idea developed from the circumstantial evidence that the Wuhan Institute of Virology (WIV) is close in proximity to the pandemic's early outbreak and from suspicions about the secretiveness of the Chinese government's response to the pandemic. Scientists from the WIV were known to have collected SARS-related coronaviruses; the allegation that the institute performed undisclosed risky work on such viruses is central to some versions of the idea. Some versions are based on speculation, misinformation, or misrepresentations of scientific evidence.

China COVID-19 cover-up refers to the efforts of the Government of China and the Chinese Communist Party (CCP) to hide information about the outbreak of the COVID-19 pandemic and the origins of SARS-CoV-2. Since the beginning of the pandemic, the Chinese government has made efforts to obscure the initial outbreak of the disease, clamp down on domestic debate or dissent about it, hinder further research into its origins, and spread false counter-narratives about the virus. The Chinese government has stated that no cover-up regarding the COVID-19 outbreak has taken place.