Kato was born in Hiroshima, Japan, but he grew up in Osaka and Yokohama-shi. [1] [2] He joined Johnny's Entertainment on April 17, 1999 when he was 11 years-old.[ citation needed ] As a junior he was a member of the organizations Best Beat Boys (B.B.B.), Boys Be Ambitious (B.B.A.), Best Beat Dancing (B.B.D.), Beautiful American Dreams (B.A.D.), J-support and K.K.Kity. He later debuted as a member of NEWS in 2003. Along with other NEWS members, he plays the guitar, composing some of NEWS' songs, including his own solo "Kakao" in 2002, which he composed the lyrics to.

On 2010, he graduated from the College of Law, Aoyama Gakuin University. [3]

Kuniko Ishigami, better known by her stage name Satomi Ishihara, is a Japanese actress from Tokyo.

Miho Katō, better known by her stage name of Miliyah Kato is a Japanese pop and urban singer-songwriter from Toyota, Aichi, Japan. They sales in Japan, both physical, digital and ringtones are 12.6 million copies.

Emiri Katō is a Japanese voice actress and singer working for 81 Produce. At the 2nd Seiyu Awards, she won Best New Actress with her roles in Powerpuff Girls Z as Momoko Akatsutsumi/Hyper Blossom and Lucky Star as Kagami Hiiragi. She also shared a Best Singing Award with the rest of the Lucky Star girls for the theme song "Motteke! Sailor Fuku". At the 6th Seiyu Awards, she won Best Supporting Actress with roles such as Kyubey in Puella Magi Madoka Magica, Kiko Kayanuma in Darker Than Black, and Mey-Rin in Black Butler. She and fellow voice actress Kaori Fukuhara were in a duo music group called Kato*Fuku, which sang theme songs for When Supernatural Battles Became Commonplace and Battle Spirits Saikyo Ginga Ultimate Zero. Kato*Fuku released three albums from 2012 to 2015, and disbanded in 2016.

Shingo Murakami is a Japanese singer, presenter, variety tarento and actor. He is the keyboardist of the Japanese male idol group Kanjani Eight.

Genichiro Takahashi is a Japanese novelist.

Shimpei Itoh is a Japanese manga artist. His best-known works include Moldiver and Hyper Doll. He recently began a new series, Taishō Baseball Girls, based on the light novels by Atsushi Kagurazaka.

Fumika Shimizu is a Japanese actress, gravure idol and model. In February 2017, she announced her temporary retirement from the entertainment industry to join the controversial Happy Science religion. Through Happy Science, she announced a return to acting under her new name Yoshiko Sengen with Happy Science's ARI Production company.

Suzuko Mimori is a Japanese actress, voice actress and singer. She is represented by Hibiki Cast. She voiced Umi Sonoda in Love Live! and Hikari Kagura in Revue Starlight. 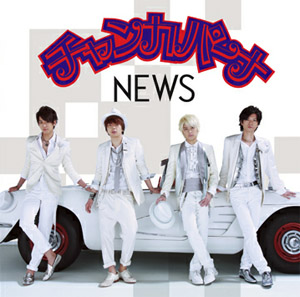 "Chankapāna" is a song by Japanese music group NEWS. It is their 14th single and their first since the departure of Tomohisa Yamashita and Ryo Nishikido from the group. Written by Hacchin' Maya and Heroism, the single was released in Japan on July 18, 2012, under Johnny & Associates in six editions: a CD-only edition, limited editions N, E, W, and S, and a limited box set edition. "Chankapāna" debuted at number one on the weekly Oricon singles chart. The single has charted for three weeks and has sold over 272,000 copies in Japan. It was certified platinum by the Recording Industry Association of Japan (RIAJ).

"World Quest/Pokopon Pekōrya" is a double A-side by the Japanese idol group NEWS. It is their 15th single and was released in Japan on December 12, 2012, under Johnny & Associates in four editions: a CD-only edition, limited editions A and B, and a special edition.

Haruko Kato was a Japanese actress.

Rena Takeda, nicknamed Renarena (れなれな), is a Japanese actress and model who is affiliated with Vithmic Co., Ltd.

Ryō Katō is a Japanese actor and tarento. He graduated from the Department of Moving Images and Performing Arts in the Faculty of Art and Communication at Tama Art University. He is represented with Cube.

Seiko Tanabe was a Japanese author. She graduated from the Department of Japanese Literature of Shōin Joshi Senmon Gakkō. Author of numerous novels, she won the Akutagawa Prize, Yomiuri Prize, and Asahi Prize, and received the Order of Culture for her contributions to literature.

"Kasa wo Motanai Aritachi wa" (傘をもたない蟻たちは) is a 2016 Japanese short drama series consisting of four, twenty five minute episodes (stories) directed by [[Keita Kono]]. It was released in Japan by the Fuji TV weekly from January 9 to January 30. The series is based on the collection of short stories, of the same title, by Shigeaki Kato.

Yoshio Aramaki is a Japanese novelist, science ficition writer, mystery writer, critic writer, and a collector of arts. Original given name was Kunio Aramaki. He has changed his name to Yoshimasa Aramaki (荒巻義雅). Aramaki is well known by his so-called "Meta-SF" works which are characterized by their speculative and fantasic themes and depictions. He is also famous for his various series of imaginary battle novels and alternate history novels such as Konpeki no Kantai series. He is a member of the Japan Writers’ Association, of the SFWJ, and of the Contemporary Haiku Association. He was also a professor in the Seishū Women's University from 1993 to 1997.

Yukino Kishii is a Japanese actress. She has played Taka in the 55th NHK taiga drama Sanada Maru, Sari Ishikawa in the film Pink and Gray, and Taka Kōda in the 99th NHK asadora Manpuku, among numerous other TV and film roles. Her lead performance in the 2017 film Goodbye, Grandpa! earned a Best Newcomer Award at the 39th Yokohama Film Festival.

The Case Files of Lord El-Melloi II is a Japanese light novel series written by Makoto Sanda and illustrated by Mineji Sakamoto. Officially part of the Fate series, it began serialization by Type-Moon under the Type-Moon Books imprint on December 30, 2014 to May 17, 2019. The novels are set between the events of Fate/Zero and Fate/stay night, focusing on Lord El-Melloi II, a former master who now investigates several mysteries after his participation in the Fourth Holy Grail War.