Tsuyuguchi was born in Tokyo and raised in Ehime. [2] He attended Ehime University, but withdrew before completing his degree and joined the Haiyuza Theatre Company in 1955. [2] His career as a screen actor started in 1959. [2]

He came to prominence playing the thief in Shohei Imamura's Unholy Desire . [2] He became one of Imamura's favorite actors, appearing in four of Imamura's other films (he also appeared in the stage play "Paragy Kamigami to Butabuta" directed by Imamura in 1962), including Eijanaika [3] in 1981. But he declined Imamura's offer for him to play the role of Taro in Warm Water Under a Red Bridge (2001).[ citation needed ] He won White Bronze Award for his roles in Woman of the Lake and Yojōhan monogatari: Shōfu shino in 1966. [2]

From the late 1980s to the mid 1990s Tsuyuguchi appeared a lot of two-hour special dramas and played lead role. Tsuyuguchi played lead role in Morimura Seiichi no Shūchakueki Series 1–4 (directed by Kazuo Ikehiro), it is relatively famous in Japan. His final appearance as an actor is Morimura Seiichi no Shūchakueki Series 4 (Ao no Jūjika) which was broadcast on TV Asahi in 1994.

He also portrayed the voice of the "Baron Humbert von Gikkingen" in the original Japanese version of the Studio Ghibli anime film Whisper of the Heart in 1995. [2]

Kōki Mitani is a Japanese playwright, screenwriter, actor and film director and was previously married to Japanese actress Satomi Kobayashi. He was named after Taihō Kōki, the youngest sumo wrestler to become yokozuna. He studied dramatics at Nihon University.

Tomoko Naraoka is a Japanese actress and narrator. The daughter of a painter, she was born in Komagome, Hongō, in the city of Tokyo, Japan. She graduated from Joshibi University of Art and Design.

Kiyotaka Mitsugi is a Japanese actor. His career has centered on television tokusatsu and jidaigeki. He starred in the 1967–68 television series Kōsoku Esper and the 1973 series Shirojishi Kamen, and played a supporting role as the ninja Saizō in Series III, Episodes 1–57, of Abarenbō Shōgun. In NHK's eleventh Taiga drama, Kunitori Monogatari, Mitsugi portrayed Akechi Mitsuharu. He appeared regularly in Episodes 436–509 of Tokusō Saizensen. A frequent guest actor, he made six appearances on Ōedo Sōsamō and four on Zenigata Heiji, three on Taiyō ni Hoero!', and two on Happyaku Yachō Yume Nikki. Fans of the tokusatsuChikyuu Sentai Fiveman know him as Dr. Hoshikawa. The producers of Abarenbō Shōgun selected him to reprise his role in the 500th episode special, and again to portray the daimyō Tokugawa Munenao in Series VI.

Taiyō ni Hoero! (太陽にほえろ!), literally Roar at the Sun, was a long-running prime-time television detective series in Japan, which ran from 1972 to 1986 for a total of 718 episodes. The lead star was Yujiro Ishihara. It also helped further the career of actors such as Yūsaku Matsuda and Kenichi Hagiwara as well as Hiroshi Katsuno and Masaya Oki. It was a police procedural set mostly in a police station. It was one of the most popular and iconic detective dramas in Japanese television history. A sequel was aired from 1986 to 1987, airing for 12 episodes. 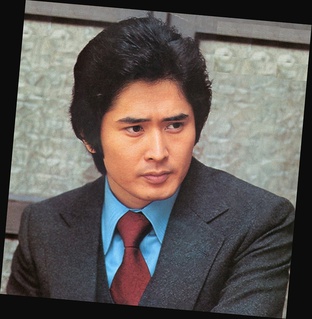 Masaya Oki was a Japanese actor and singer who appeared in many films and television series.

Hiroshi Katsuno is a Japanese actor. He graduated from Aoyama Gakuin University. Katsuno's debut was as a detective Texas in the television series Taiyō ni Hoero! in 1974 and he won great popularity through the role. The episode his character Texas was killed recorded 42.5% audience rating, it was highest audience rating in Taiyō ni Hoero!.

Unmeitōge (運命峠) is a Japanese jidaigeki or period drama that was broadcast in prime-time in 1974. It is based on Renzaburō Shibata's novel of the same title. The lead star is Masakazu Tamura.

Raita Ryu is a Japanese actor. He is well known for his role in Taiyō ni Hoero!. He has a son Yōhei Hasegawa, who is a musician and guitarist.

Kei Taguchi is a Japanese actor. He is most famous for playing villains and appeared in many jidaigeki and detective television dramas as a guest. He is also known as voice actor. Taguchi graduated from University of Tokyo.His career as a screen actor started in 1955. His first film appearance was in the 1955 film Aisureba Koso directed by Satsuo Yamamoto.

Shūchakueki Series, also known as Morimura Seiichi no Shūchakueki, is a long-running prime-time television detective drama series in Japan that first aired on TV Asahi in 1990. Based on Seiichi Morimura's Ushiokeiji no Jikenbo series.

Masanori Sera is a Japanese singer and actor from Fukuyama Hiroshima. He graduated from Osaka University of Arts. As a singer Sera's rock band, Sera Masanori&TWIST appeared in the Kōhaku Uta Gassen twice. He made his solo debut with the single Tokyo rouge (Tokyo指紅) in 1982. On the other hand, As an actor he won Best Supporting Actor award at the 22nd Japan Academy Prize ) for his role in Dr. Akagi.

Masaki Kanda is a Japanese actor. His ex-wife is Seiko Matsuda and their daughter is Sayaka Kanda.

Kunihiko Mitamura is a Japanese actor/singer. He is well known for his role in Taiyō ni Hoero! and Hide in the Hissatsu series.